Home Slaughtering and Processing of Beef

William C. Stringer and Harold B. Hedrick
Department of Food Science and Nutrition

A beef animal selected for slaughter should be healthy and in thrifty condition. Keep the animal off feed 24 hours before slaughter, but provide free access to water.

Don't run or excite the animal prior to slaughter because this may cause poor bleeding and give the carcass a bloody appearance.

The weather, especially expected temperatures the few days following slaughter, is extremely important. Night temperatures should be 32 degrees Fahrenheit or lower for the carcass to chill properly without refrigeration.

The meat will spoil if improperly chilled and stored during warm weather. Also, during extremely cold weather, the meat should be protected from freezing by covering it with a clear cover. 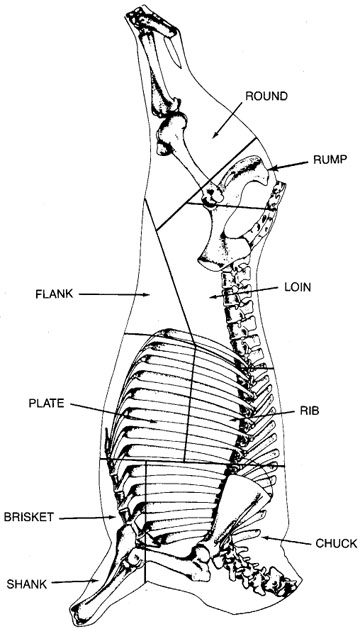 Figure 1
Wholesale cuts of a beef side in reference to the skeleton.

Slaughter should be done in a dry, clean, dust-free area. A well-drained grassy area is recommended.

The carcass can be chilled without refrigeration by hanging it in a dry, clean building. Freedom from odors or contamination is essential.

Most meat spoilage and off-odors and flavors can be attributed to one or more of the following causes:

The minimum required items of equipment for home slaughtering are as follows.

How to stun animal

How to bleed animal

As soon as the animal is down, bleed it without delay. Stand behind the animal and with the sharp skinning knife make an incision through the hide in the middle of the dewlap immediately in front of the breastbone.

Be careful not to stick too deep into the chest cavity. Cut straight with the backbone. Pump the foreleg back and forth a few times to help bleeding.

How to skin animal

Turn the animal on its back and place a short prop (square post) on either side to hold it there. Remove the forefeet and shanks at the knee by locating and cutting through the flat joint with a knife. Skin out the hind legs and remove the hind feet and shanks by sawing.

Next, split the hide from the opening in front of the brisket down the midline of the belly to the bung. Hold the skinning knife at a flat angle.

Then split the hide at the rear of each hind leg, beginning where the shank was removed, moving to the udder or scrotum. Don't skin the outside of the hind and front legs until the carcass is hoisted. The intact hide will keep the shanks clean during hoisting.

The next part of skinning is known as "siding." Begin the siding by sliding the knife under the skin that has been cut over the belly. Grasp the outside of the loosened hide with one hand and pull it up and outward. Place the knife firmly against the hide with the cutting edge turned slightly toward the hide.

Use long, smooth strokes of the knife to remove the hide down over the sides. This is one of the most difficult tasks in skinning.

The inside of each round muscle over the pelvis is covered with a thick, white membrane. Follow this membrane and avoid cutting into the muscle. The knife can be forced between the soft cartilage that joins the pelvic bone. In older animals, the pelvis must be sawed.

The carcass is now ready for hoisting. Insert the hooks of a beef spreader or single tree in the tendons of the hind legs. After the carcass is partially hoisted, complete skinning the rounds and the back of the carcass.

Remove the bung by cutting around it on the two sides and back and pulling through the opening of the pelvic cavity. Continue pulling the bung and intestines and cutting the ligaments that attach the intestines to the back.

Pull down on the paunch to tear it loose from the carcass, cut the esophagus where it goes through the diaphragm and allow the intestines and paunch to drop into a container or on the ground. The liver should still be attached to the carcass and can be removed next. Remove the gall bladder from the liver.

Continue hoisting the carcass until the head clears the ground. Remove the heart and lungs by first cutting out the diaphragm, the white connective tissue that separates the abdominal and thoracic cavities. Grasp the heat and lungs, pull forward and downward and cut the large blood vessel attached to the backbone. Remove the heart, lungs and esophagus as one unit.

Complete skinning the carcass and remove the head The head is removed by cutting across the neck above the poll and through the atlas joint.

Carefully examine all the internal organs and the dressed carcass for any abnormalities or conditions (such as abscesses or inflammation) that might affect the wholesomeness of the meat.

The carcass should be split into two sides. Start the splitting by first sawing through the sacral vertebrae from the inside. As soon as the cut is made through the pelvic area, sawing can be done easier from the back. Make the split down the center of the backbone to the neck. Leave the neck attached to balance the sides on the singletree.

Trim any soiled, bruised or bloody pieces of meat. Wash the carcass with cold water to remove any remaining blood and dirt. Pump the forelegs up and down a few times to aid in draining blood from the forequarters.

To improve the appearance of the carcass, shroud it tightly with wet, clean white muslin to smooth the exterior fat during chilling. Use skewers or ties to tighten the shroud.

Beef should be aged a few days before cutting. The amount of aging will depend on the amount of fat covering, desired flavor and temperature.

Carcasses that have only a thin fat covering should be aged three to five days; those with more fat, five to seven days. Very little tenderization occurs after seven days. Longer aging may result in off flavors and odors due to microbial growth. Only carcasses with fat covering the entire outside should be aged longer than 10 days.

If the temperature of the carcass rises above 40 degrees Fahrenheit, the time required for aging is reduced. Also, chances of spoilage are increased.

The sides of the carcass are quartered by cutting between the 12th and 13th rib (Figure 1). The 13th rib is left on the hindquarter to allow air to circulate over the kidney knob and to prevent bacterial growth if additional aging time is desired.

Remove the rib and plate from the chuck and brisket by cutting between the fifth and sixth rib. Cut perpendicular to the top line of the carcass. Separate the rib cut from the plate at a point 1-1/2 inches below the rib eye muscle on the end where the side was quartered and cut parallel to the back.

The rib may be cut into rib steaks by cutting the desired thickness. The blade end may be made into a roast, or the entire cut boned into boneless rib steaks or roasts. The rib cuts are rather tender and may be broiled or dry roasted.

The plate may be processed by cutting two or three rows (2 inches) of short ribs and the remaining boned for ground beef.

To remove the brisket and foreshank from the chuck, first locate the arm bone joint near the surface of the carcass. Cut about 1 inch above the top of the joint, perpendicular to the cut made when the quarter was first divided (Figure 1).

The brisket may be separated from the shank by cutting through the natural seam that joins them. The shank is usually boned for grinding, but cross-cut shank or soup bones may be made. The brisket should be boned for a roast or for grinding.

The blade end of the square-cut chuck may be cut into steaks or roast.

The hindquarter should be placed on the cutting table with the outside down.

The flank steak, the prominent muscle on the inside near the center of the flank, may be stripped out for a steak and the remaining lean trimmed for grinding.

Separate the loin from the round by cutting between the fourth and fifth sacral vertebrae at a point approximately 1 inch in front of the aitch bone. The loin should then be cut into steaks. Begin cutting at the sirloin end and cut toward the small end of the loin.

Remove the rump by cutting parallel to the two ends of the aitch bone and just behind the aitch bone. The rump is usually boned and tied for roasts. The sirloin tip is removed by following the round bone to the knee cap. The tip can be used as roasts or steaks.

The remainder of the round may be cut into steaks or roasts most easily by separating the top and bottom round. The hind shank should be boned for ground beef.

Packaging beef for the home freezer

Successful freezing depends on proper packaging to protect foods in freezers. Use moisture-vapor-proof material to prevent the loss of moisture and the development of off flavors.

Ordinarily Kraft or waxed papers do not adequately protect food in freezers. Use moisture-vapor-proof material, designed especially to wrap foods for freezing. These materials are strong, easy to handle, resist grease, are moisture proof, and won't transfer odors. Plastic and Kraft laminated material is probably the most economical and is easiest to use in most cases.

The drugstore fold is the approved method to seal the moisture in and air out.

To make the drugstore fold:

For easier separation of steaks when frozen, place a double thickness of waxed or freezer paper between each piece with plastic sides to the meat.

Before packaging, remove or cover sharp bone edges with double thickness of freezer paper so they will not puncture the wrapping paper.

Label each package clearly with a crayon or grease pencil. Include the name of the cut, the quantity and the packaging date.

The maximum recommended period of freezer storage for meat is 12 months.

For best results, thaw in original package in the refrigerator. Allow approximately three hours per pound for small roasts and steak packages, and four to five hours for larger roasts. If thawed at room temperature, allow one hour per pound.

Frozen meat may be cooked satisfactorily either by thawing prior to or during cooking. When cooking steaks or roasts from the frozen state, allow additional cooking time.

Frozen roasts require approximately one-third more time for cooking than roasts that have been thawed. Allow additional time for cooking steaks or ground beef patties compared to thawed cuts. When broiling, place frozen steaks and ground beef patties further from the heat or at a lower temperature than thawed cuts so the meat will be cooked to the desired degree of doneness without becoming too brown on the outside.