Brown patch is a sheath- and leaf-blighting summer disease that is common on tall fescue and bentgrass. It is particularly severe on tall fescue. With increased use of tall fescue in urban and commercial landscapes, brown patch has become a significant management problem.

Brown patch is caused by the fungus Rhizoctonia solani, which is classified into subgroups on the basis of anastomosis groups (AG). Subgroup AG-1 is the most common on tall fescue. Other anastomosis groups are found on bentgrasses, zoysiagrass and perennial ryegrass. The efficacy of some fungicides may vary among anastomosis groups. 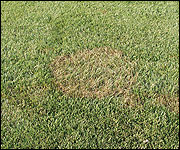 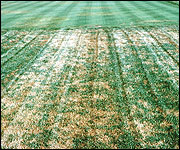 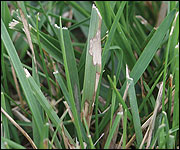 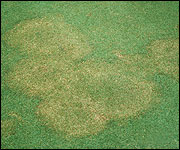 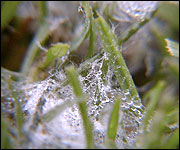 Figure 5
Mycelium of Rhizoctonia solani on and between the leaf blades of tall fescue. N. Tisserat photo.

Brown patch in tall fescue is first noticed as areas of the turf that turn purple to gray-green, resembling moisture stress. These areas quickly fade to light tan or brown as infected leaves dry out. The symptoms sometimes occur as discrete circular patches ranging from a few inches to several feet in diameter (Figure 1). More commonly, symptoms occur in large, diffuse areas (Figure 2).

Foliar symptoms in tall fescue are easy to see. Straw-colored foliar lesions with dark brown borders are apparent at the transition zone between healthy and diseased turf (Figure 3). Once the lesions have completely girdled the leaf sheath or leaf blade, the entire leaf quickly fades to tan or brown. Foliar symptoms are sometimes confused with those of dollar spot; however, dollar spot is rare on tall fescue.

Symptoms on bentgrass putting surfaces appear as copper-colored circles ranging in size from several inches to several feet in diameter (Figure 4). Foliar symptoms are not commonly observed on creeping bentgrass.

During weather that is favorable to brown patch, mycelium (mass of fungal vegetative growth) can sometimes be seen in the early morning. It is found at the transition zone between healthy and affected turf and can be seen growing over and between the leaf blades (Figure 5). When the disease is active, there is often a dark gray border at the margin of the patch where mycelium can be detected. Hyphae (individual fungal strands) have a predominantly right-angled branching pattern in contrast to that of the dollar spot fungus, which is predominantly Y-shaped (Figure 6).

On tall fescue
Avoid seeding rates greater than 6 to 8 pounds per 1,000 square feet when establishing or renovating lawns. A higher population density makes it physically easier for R. solani to move from leaf to leaf and increases humidity and duration of leaf wetness periods.

Most tall fescue cultivars are susceptible to R. solani. Some newer cultivars have a higher level of resistance but can still be severely blighted under heavy disease pressure. Recovery, however, may occur more quickly than with older cultivars.

Brown patch occurs less frequently when available nitrogen is adequate to low and phosphorus and potassium levels are adequate. Apply the majority of the nitrogen fertilizer in the fall. Applications of more than 4 pounds of actual nitrogen per 1,000 square feet per year will predispose the turfgrass to increased brown patch activity. Don't apply nitrogen fertilizer when brown patch is active. A light fertilization (less than 1/4 pound nitrogen per 1,000 square feet) after a brown patch outbreak may speed turfgrass recovery.

Maintain height of cut at 3 to 3-1/2 inches. Returning clippings does not increase brown patch severity.

Some research results indicate that the use of organic composts (turkey litter, cow manure, brewery waste, etc.) reduces brown patch severity. Other studies resulted in no significant control of the disease with these types of organic amendments.

Do not irrigate turfgrass in late afternoon or evenings if possible. This increases the duration of leaf wetness and increases the likelihood of brown patch development. Irrigation after midnight to early morning is preferable. These are the hours the turf would normally be wet from dew, and irrigation at this time does not extend leaf wetness periods.

R. solani usually infects only the leaves and leaf sheaths, so there is a high potential for recovery with moderating environmental conditions. The turf often fully recovers from blighting in two to four weeks without the use of fungicide. But many homeowners are unwillingly to accept the unsightly appearance of their lawn during this time. Also, with extended periods of weather favorable to brown patch, the crown may also be killed.

The use of fungicide is almost always needed on high-profile, high-visibility lawns, green surrounds and fairways. Refer to Table 5 for a list of fungicides labeled for control of brown patch. Some of the newer combination products (e.g., Armada or Headway) also fit well in this market. When used in combination with the cultural practices outlined above, these products can provide three to five weeks of disease suppression. Two to three applications may be adequate to provide season-long control. Begin preventive sprays just before the most likely time period for infection in your region.

Another option is to apply a fungicide as soon as symptoms appear. This curative program will suppress growth and development of R. solani, but the turf will not recover from brown patch until temperatures are less favorable for the fungus and more favorable for growth of the cool-season grass.

On creeping bentgrass
Brown patch on bentgrass putting greens is best managed with a preventive fungicide program. Many of the cultural practices outlined above for tall fescue can be adapted for use on higher cut creeping bentgrass on tees and fairways.