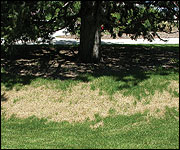 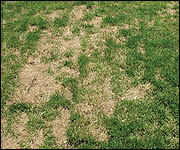 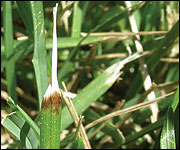 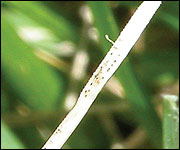 Figure 5
Top: Conidia of an Ascochyta sp. produced in pycnidia.

Ascochyta leaf blight symptoms can develop throughout the growing season but are more common during hot, droughty periods that were preceded by cool, rainy conditions. Large irregular patches of turf rapidly turn a straw-color and appear dead (Figure 1). The overall appearance of the disease resembles drought stress, except that the symptoms of Ascochyta leaf blight appear quickly (sometimes overnight). Although the blighting within an area appears complete from a distance, healthy leaves are interspersed within the patch (Figure 2). Blighting is usually restricted to the leaves. Bluegrass crowns and roots typically are not killed.

Leaves infected with Ascochyta spp. often exhibit a bleached tip dieback that extends about a third to halfway down the leaf blade (Figure 3). The margin between healthy and diseased tissue is abrupt and slightly pinched, with a dark brown to purple banding that is generally wider than that associated with dollar spot. Sometimes spots with distinct borders occur elsewhere on leaf blades. In other cases leaves may exhibit white banding or be entirely collapsed and shriveled. These foliar symptoms resemble heat or drought stress.

Ascochyta spp. produce minute yellow to dark brown, flask-shaped fruiting bodies (pycnidia) in diseased leaf tissue (Figure 4). These fruiting bodies, which are easy to view with a hand lens, are peppered throughout the dead leaves and can be useful as a diagnostic sign distinguishing Ascochyta leaf blight from dollar spot, abiotic causes and white grub damage. With white grub damage, the turf can be easily peeled back to observe the grubs.

Conidia (spores) produced within a pycnidium are hyaline (colorless) with one to two septa (Figure 5 top). Septate condia are often slipper-shaped (Figure 5 bottom).

Ascochyta spp. can be found on senescing or dead leaves of several turfgrass species; however, the disease appears to be most serious on Kentucky bluegrass.

Ascochyta spp. survive as conidia in pycnidia on dead leaves or clippings remaining in the thatch. The pycnidia are highly resistant to breakdown by drought or extreme temperatures. Thousands of conidia ooze from a single pycnidium during wet weather and are dispersed by splashing rain, irrigation, mowing or other management activities.

Ascochyta leaf blight damage can be managed by following good cultural practices that minimize stress to the turfgrass. Reduce thatch and promote water infiltration through the soil by yearly core cultivation. Maintain height of cut between 2-1/2 and 3 inches. Minimize wounding of the leaf blades by maintaining sharp mower blades. Avoid mowing during wet weather, especially when Ascochyta spp. are active. Reduce mowing frequency and increase mowing height during Ascochyta leaf blight outbreaks. The fungus can be spread from one location to another on grass clippings, although this is unlikely to contribute significantly to disease development. Similarly, collecting clippings while mowing to reduce the amount of inoculum is unlikely to reduce disease severity. Disease development depends more on environmental conditions than on the initial amount of fungus present in the turfgrass.

Try to maintain uniform soil moisture. Check the irrigation system to make sure that all irrigation heads are working properly and that water is being distributed uniformly to avoid drought stress. On the other hand, excessive irrigation and poorly drained soils can also promote disease development.

Ascochyta leaf blight is primarily a leaf disease and not a root or crown disease, so it rarely causes plant mortality. Turfgrass usually recovers completely after a couple of weeks. Although several fungicides will inhibit Ascochyta spp., they can be expensive and difficult to apply. Furthermore Ascochyta leaf blight development is sporadic and rapid, making timing of preventive and curative fungicide applications difficult.