Copperheads are the most abundant venomous snake found in Missouri (Figure 5). They prefer to live on rocky hillsides and along forest edges. Copperheads also can be found along wooded stream borders, old fields and meadows, where they search for rodents. They normally are active from April to November. Two subspecies are found in Missouri. The Osage copperhead is found in the northern two-thirds of the state, and the southern copperhead is found in the southern third of the state.

Young copperheads have a sulfur yellow tail. The snake loses this color as it matures. The young are born in August or September, with two to 10 in a litter. Although copperheads are not usually aggressive, they cause most of the venomous snakebites in Missouri. Their bites are not normally fatal to adults. Elderly people, people in poor health and small children are in more danger from copperhead bites. 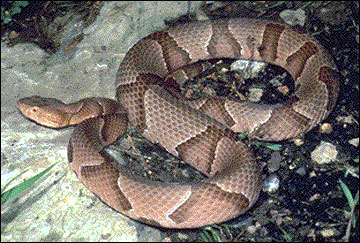