The gall wasp, Dryocosumus kuriphilus Yasumatsu, was introduced into North America in 1974 on imported chestnut cuttings. A native of China, the gall wasp is also considered a major pest in Japan and Korea.

The gall wasp has been identified in Georgia, Alabama, North Carolina, Virginia, Maryland, Pennsylvania, Maryland, Kentucky, Tennessee and Ohio. Although the gall wasp has not been found in the Midwest, it is likely to be found in additional areas as detection surveys continue. D. kuriphilus may be established in an area for some time before it is identified.

The distribution of this pest in the United States is primarily due to the transport of infested seedlings to new areas and the exchange of infested scion wood used to graft new trees.

This insect pest lays eggs in the buds of chestnut shoots, and galls develop on the shoot tips, leaves and catkins. These galls greatly reduce nut production and suppress shoot growth. After adult insects emerge, the dried, blackened galls become woody and can persist on older limbs for several years. In cases of severe infestations, interior portions of the tree canopy die and trees are killed.

Female adult wasps, one-eighth-inch long, lay three to five eggs in a cluster inside chestnut buds in early summer. Multiple adults may oviposit in a bud, with as many as 25 eggs per bud. Eggs hatch in 40 days and the larvae remain dormant until the following spring. As buds growth begins, larvae induce gall formation on developing plant tissues. Larvae feed on the inner gall tissue for 20 to 30 days before pupating. Adult wasps emerge from the galls in late May and early June. Dispersal by wasp flight has been at a rate of 23 km per year, however, dispersal of adult insects has been augmented by prevailing winds.

Because the dormant larvae are not easily detected on chestnut twigs, infested plant material, especially that used to propagate new trees, may escape detection. Pruning and burning infested plant material may retard further movement of this pest. Chemical controls are not feasible on trees where nuts are harvested for human consumption. Currently, University of Missouri researchers are studying insect monitoring, trapping and disinfestation strategies. The purchase of seedling trees or scion wood from nurseries where the gall wasp has been identified should be avoided to limit the spread of this serious pest.

If you observe galls on chestnut trees in a previously non-infested site, please contact: 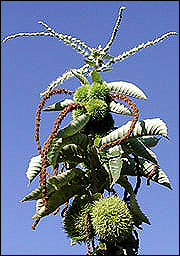 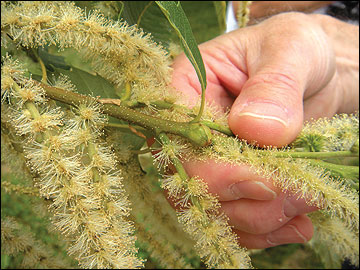 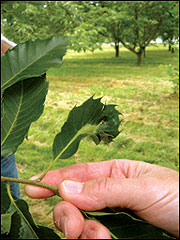 A new gall forms on a chestnut shoot tip during flowering. 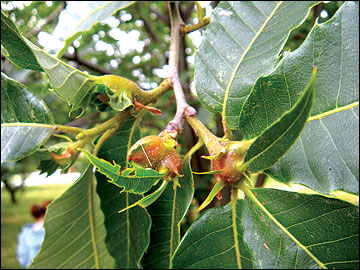 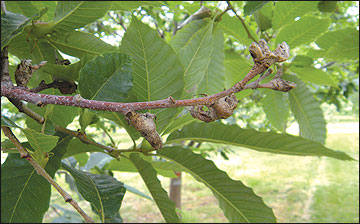