Sheath blight is the most destructive disease Missouri rice growers face. Crop losses may range from slight to heavy each year, depending on weather, the plant growth stage when infection occurs, the extent of infection and the rice varieties grown.

The severity of sheath blight in Missouri has increased in recent years due to increased use of highly susceptible varieties, a lack of crop rotation, thicker stands and use of higher nitrogen (N) rates, and earlier planting dates.

Sheath blight symptoms may sometimes appear on seedling rice, but symptoms are more likely to develop after jointing begins. The first symptom is an oblong, water-soaked lesion on leaf sheaths at or near the water line (Figure 1). In two or three days the lesion will have a grayish-white center surrounded by a dark purplish- or reddish-brown margin and may be up to one inch long. This lesion interrupts the flow of water and nutrients to the leaf tip and the tip may die. Tissue below the lesion may remain green.

As the plant grows and the canopy closes, the humidity inside the canopy increases. In this humid environment, the fungus grows upward inside the plant and on the plant’s surface, causing new lesions. The fungus also can spread to nearby plants. Severely damaged plants may lodge. These patches of lodged plants are easily seen from a combine at harvest.

Damage can range from partial infection of the lower leaves with little effect on grain development to premature plant death (Figure 2). Both yield and grain quality are reduced when the infection prevents the flow of water and nutrients to the grain. Grain may develop only partially or not at all. Poorly developed grain usually breaks up during milling, thus reducing quality.

Sheath blight is more prevalent during warm, moist weather and in thick, lush stands because of the high humidity that develops in the canopy. 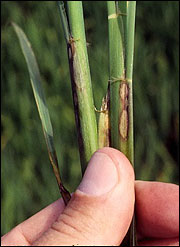 Figure 1
Initial sheath blight symptoms usually occur as water-soaked lesions on the first leaf sheath at or near the water line. 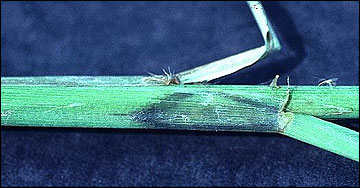 Figure 2
Advanced leaf sheath and stem infection: the sheath has been girdled and the leaf is dead.

Cause of sheath blight

The disease is caused by a fungus named Rhizoctonia solani. This fungus survives in the soil from year to year as a hard, weather-resistant structure called a sclerotium. A sclerotium will float to the surface of rice flood water. When it contacts a rice plant, the fungus grows out from the sclerotium and moves into the leaf sheath.

Later new sclerotia, which have developed on infected stem surfaces (Figure 3), fall from the plant to complete the life cycle. Sclerotia can remain alive in the soil for several years. 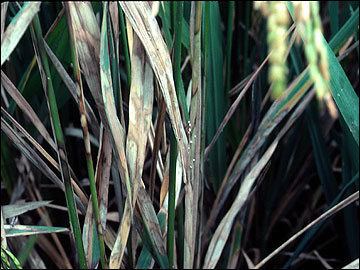 The disease can be controlled by following some simple production steps:

Timing is essential for best fungicide effectiveness. The best time for application is during the “window” as indicated by the DD50 program, which occurs from 1/4-inch IE to two days before heading. Earlier or later applications will not give effective sheath blight control.

Labeled fungicides can be applied as a tank mix with N solution to save an aerial application cost. However, timing of either the N or the fungicide application should not be compromised just to reduce cost.

The suggested procedure is to determine the time to apply midseason N by either the DD50 prediction schedule or by examining internode elongation. Then determine the level of sheath blight infection. Apply an N-fungicide tank mix only when the timing of each coincides. There may be more foliage burn when a tank mix is applied, particularly when rice foliage is lush, but the effect is cosmetic and not likely to affect yield or quality.

Caution
Do not apply fungicides to nontarget areas such as fish ponds. Follow label directions fully, especially the endangered species use restriction in Butler and Ripley counties.

Damage due to sheath blight will be more severe when infection occurs at internode elongation rather than later. This is about the time when most varieties should receive the first midseason N application and fields should certainly be scouted for sheath blight at this time. The DD50 printout provides a beginning and cut-off date for scouting. The disease is likely to occur in the same fields each year, so fields with a history of the disease should be scouted.

A suggested scouting technique is: Inspect for water-soaked lesions or spots on the leaf sheath just above or below the water line at a minimum of one location per five acres. Check all the plants within an arm’s length (elbow to fingertip) for symptoms. Bend the rice plant over for easy observation. Apply a fungicide when the disease threshold is reached for the particular variety growing in the field. Rescout every three to four days until the treatment level is reached or until rice begins heading.

Blight distribution will probably be erratic in the field. More infected plants usually will be found at field borders, on low sides of the field and where the disease occurred in the past. If distribution is not uniform, consider treating only those areas of the field that have reached the treatment threshold.

If treatment level does not occur by heading, then a fungicide for sheath blight is not recommended. Infection after heading probably will not cause economic injury to the plants.