Generally, a good soil for crop production contains about 25 percent water and 25 percent air by volume. This 50 percent is referred to as pore space. The remaining 50 percent consists of soil particles. Anything, for example tillage and wheel traffic, that reduces pore space results in a dense soil with poor internal drainage and reduced aeration.

Soil compaction is becoming a more serious problem for Missouri farmers. Field machines tend to be heavier, and there is motivation for farmers to work the soil when it is too moist. Because compacted soil has smaller pores and fewer natural channels, water infiltration is drastically reduced. This causes greater surface wetness, more runoff, which in turn increases erosion, and longer drying time. Wet fields delay planting and harvesting and decrease crop yields. Plant roots don't grow well in dense soil. Inadequate moisture and nutrients reach the plant, and yield is reduced.

Compaction is directly affected by field machine weight, tire size and tire inflation pressure. Machines such as combines or manure tanks might weigh up to 30 tons. While lighter loads may cause just as much compaction near the surface, heavy loads cause compaction at depths that cannot be remedied by tillage.

Increased use of flotation tires has encouraged field operation when soil is too wet to support machines. This also encourages deep compaction. Figure 1 shows how soil moisture affects compaction depth. A given load and tire size causes much more deep compaction on wet soil than dry. Sod-forming crops such as alfalfa and clover, which in the past were usually included in crop rotation, provide greater support at the soil surface than bare soil. 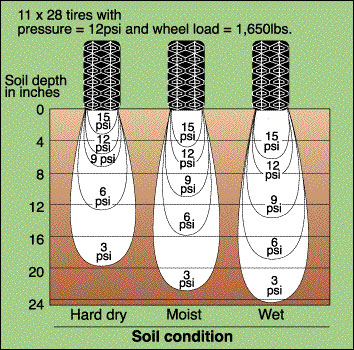 Figure 1
Effect of soil moisture on the depth of compaction (Sohne, Agricultural Engineering, 1958).

The trend toward continuous row cropping has eliminated sod-forming crops and encouraged compaction.

Tire inflation pressure is the primary factor affecting surface soil compaction. By selecting large, low-pressure tires or dual tires, a 200-horsepower (hp) tractor may cause no more surface compaction than a 50-hp tractor. The heavier tractor will cause more deep compaction than the light tractor, however. Pulling narrower, lighter equipment at higher speeds to achieve the same actual field capacity as larger, slower equipment will reduce soil compaction.

Large combines present a special problem because ASAE design standards allow tires used on a combine to carry about 50 percent more load than the same tires on a tractor. The tires have no problem carrying the extra load in the combine application, but a tire on a combine may cause much greater compaction than the same tire on a tractor. Often combines are operated in wet conditions, which accentuates the problem.

Studies in Indiana, Wisconsin and Canada have shown (Figure 2) that soil compaction reduces corn yield. The effect of compaction on yield is more pronounced on some soil types, as indicated by the two Wisconsin soils. Compaction affected silty clay loam more than silt loam. Generally, the smaller the soil particles, the more compaction reduces the yield. 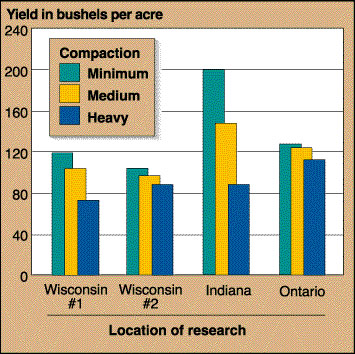 Figure 2
Effect of compaction on corn yield (University of Wisconsin Publication A3367).

During the 1986 season, plots to demonstrate soil compaction were prepared at both the Southwest Research Center near Mt. Vernon and the Greenley Memorial Farm near Novelty. At each location, researchers intentionally compacted one plot by driving a heavily loaded truck over it before tilling and planting. The studies found that compaction reduces plant growth. Ears of corn did not fill properly on the compacted plots.

Soil resistance was measured at depths to 18 inches. Measurements were taken in crop rows where no traffic occurred and in tracks directly beneath wheel traffic. Maximum soil resistance was found at a depth of 3 inches in the track and at 12 inches in the row. Soil resistance in the top 6 inches was much greater in the wheel track. Tables 1 and 2 give a comparison of yield data from the two locations. At the Southwest Research Center, plant height, population and yield were all less for grain sorghum in the compacted plot. Corn yield at Greenley Memorial Farm was drastically reduced in the compacted plot (Figure 3). These data are only for one year. 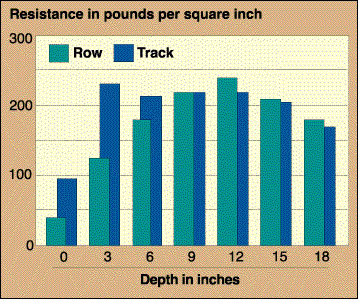 In years when soil moisture is plentiful, the impact on crop growth may not be obvious. In years of moisture shortage, plants on compacted soil stress more easily, and reduced growth and yield are noticeable.

To some extent, shallow compaction at depths of 12 inches or less can be remedied. Deep compaction cannot be corrected, however, and it causes reduced yields.

If traffic could be controlled so that wheels for all field machines used the same tracks, compaction could be limited to a small portion of the field and the effect on plants would be diminished.

At present, the only real solution is to avoid, as much as possible, field practices that cause compaction. Do not travel on wet soil unless it is absolutely necessary to do so. Try to avoid excessive axle loads, which cause deep compaction. For example, a heavily loaded liquid manure wagon would be considered excessive. Eliminate unnecessary tillage operations.