These lespedezas attract many insects. The height and structure of the plants make those insects available to bobwhite chicks. 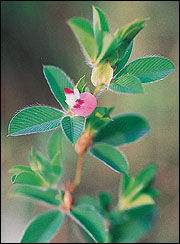 Flowers are reddish purple to white. 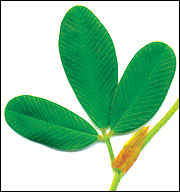 Seeds (about 1 mm across) are most often encountered still in the hull, seen in the upper right. Hulled seed is sometimes available commercially.

These two species of lespedeza exhibit many similarities in growth form, occurring as semierect herbaceous plants with three-lobed leaves and reddish-purple to white flowers. Lower leaves are spreading while upper leaves stand erect.

Before the adoption of tall fescue as the Midwest's primary forage base, farmers grew thousands of acres of annual and Korean lespedeza for summer forage or hay. Today they are used much less frequently.

Neither species is native to this country. Annual lespedeza was introduced to the United States in 1846, and Korean lespedeza was imported in 1919. Both species have naturalized. In most habitats they rarely cause the problems associated with many other exotics, but on glades they may displace more desirable native forbs. Because they are annuals, both species produce abundant seed crops that are readily consumed by quail, other seed-eating birds and small mammals. Being legumes, both species provide good brood habitat.