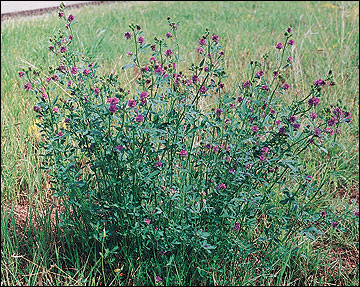 Upright growth form and purple flowers are good identifiers of alfalfa, even from a distance. The growth form makes this plant excellent for brood habitat. 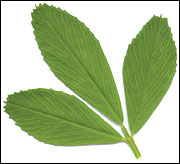 Middle leaflet is on a distinct stalk.

Like most legumes, alfalfa has kidney-shaped seeds. Seeds are 2 to 3 mm long.

Alfalfa is a legume native to the Old World, but has been in this country so long that it has naturalized in some areas. In the Midwest, it rarely persists longer than 5 to 10 years without replanting. Leaves are divided into three leaflets, with the middle leaflet on a distinct stalk. Leaflets are serrated along the outer third to half and are somewhat elongated. Flowers are usually purple, sometimes bluish, rarely white. Fruits are usually curved or twisted.

Alfalfa is well known for its forage value to livestock, but is less known as an excellent component of brood habitat for many upland birds. The upright growth form of the plant, coupled with its open understory, provides great structure and cover for bobwhite broods. Uncut or late-cut alfalfa fields may also provide good nesting habitat, particularly when desirable grasses occur in the same stand.

Unfortunately, most varieties used today have been developed to allow early hay harvest. Consequently, many alfalfa fields grown for hay are cut right in the middle of the nesting season, negating its value as cover. Hay varieties are also prone to insect and fungal damage, so many fields are sprayed with pesticides that may have direct or indirect effects on quail broods. Managers interested in incorporating this plant into quail habitat should consider using varieties developed for pasture use, rather than hay. These pasture varieties are more likely to persist without frequent cutting or pesticide use.