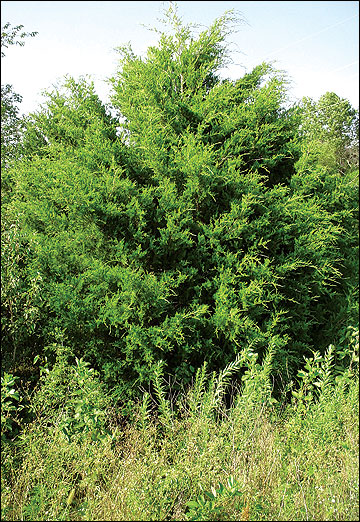 Eastern red cedar is a common, easily recognized species throughout the Midwest. 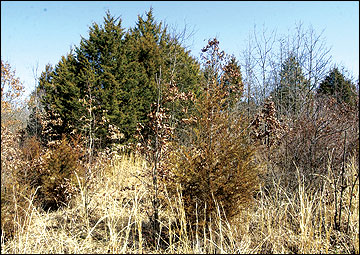 Although some eastern red cedar can improve wildlife habitat, rapid spread of the species will crowd out many plants and decrease habitat suitability.

Eastern red cedar is a small to medium-sized tree up to 50 feet tall. It is an aromatic evergreen with a dense pyramid-shaped to cylindrical crown. Male and female cones usually appear on separate trees. Male cones produce clouds of pollen in late winter and early spring and are a common source of hay fever. Berries (female cones) are dark blue and mature in late summer. Eastern red cedar commonly occurs on glades and bluffs, open rocky woods, pastures, old fields, roadsides and fencerows.

Although eastern red cedar fruits are not a favorite food, bobwhites will consume them when other foods are scarce. Bobwhites seek shelter during winter under red cedar's low, dense canopy. Old fields that become invaded by cedar may soon be devoid of bobwhites as cedars crowd out other plants and form dense stands with no understory vegetation. Cedars taller than 15 feet probably offer better bobwhite cover when cut and laid over than they do standing. Quail regularly use these cut trees for shelter from snow and winter wind. If cedars are planted or left for cover, habitat managers should regularly burn adjacent cover to control the spread from seed. Eastern red cedars less than 5 feet tall are easily controlled with prescribed burning. Cutting the female, seed-bearing trees also helps control spread. 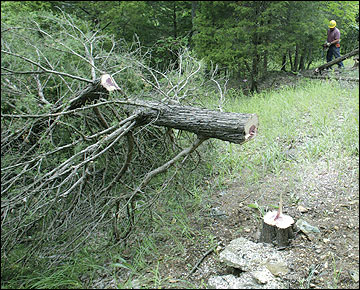 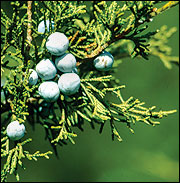 Red cedars more than 15 feet tall may provide better quail cover when they are cut and laid over to form covey headquarters.

Female trees bear hundreds of blue berries (female cones). While not a preferred food by bobwhites, red cedar seeds persist well into winter and may be used in times of food scarcity.