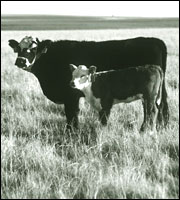 Modified conventional synchronization systems for beef cows boost fertility and increase the total number of females that can be inseminated.

The beef cattle industry has seen rapid gains in economically desirable traits, largely due to the selection of genetically superior males and increased use of artificial insemination. Recent surveys indicate, however, that less than 5 percent of the beef cows in the United States are bred by artificial insemination (AI), and only half of the cattle producers who practice AI use any form of estrus synchronization to facilitate their AI programs.

The inability to predict time of estrus for individual cows or heifers in a group often makes it impractical to use artificial insemination because of the labor required for detection of estrus. Available procedures to control the estrous cycle of the cow can improve reproductive rates and speed up genetic progress. These procedures include synchronization of estrus in cycling females, and induction of estrus accompanied by ovulation in heifers that have not yet reached puberty or among cows that have not returned to estrus after calving.

There are several advantages to a successful estrus synchronization program:

To avoid problems when using estrus synchronization, females should be selected for a program when the following conditions are met:

At present, there are three approaches to estrus synchronization:

The choice of which system to use depends largely on a producer's goals.

Melengestrol acetate is the common denominator in each of the systems presented here. MGA is an orally active progestin. When consumed by cows or heifers on a daily basis, MGA will suppress estrus and prevent ovulation.

MGA may be fed with grain or a protein carrier and either top-dressed onto other feed or batch mixed with larger quantities of feed. MGA is fed at a rate of 0.5 milligram per animal per day. The duration of feeding may vary between protocols, but the level of feeding is consistent and critical to success. Animals that fail to consume the required amount of MGA on a daily basis may prematurely return to estrus during the feeding period. This can be expected to reduce the synchronization response. Therefore, adequate bunk space should be provided so that all animals may consume feed simultaneously.

Animals should be observed for behavioral signs of estrus each day of the feeding period. This may be done as animals approach the feeding area and before feed distribution. This practice will ensure that all females receive adequate intake.

Cows and heifers will exhibit estrus beginning 48 hours after MGA withdrawal, and this may continue for 6 to 7 days. It is generally recommended that females exhibiting estrus during this period not be inseminated or exposed to natural service because of the reduced fertility females experience at the first heat after MGA withdrawal. 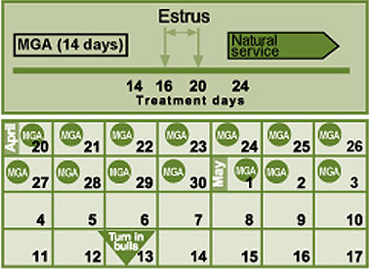 The simplest method involves using bulls to breed synchronized groups of females. This practice is especially useful in helping producers make a transition from natural service to artifical insemination. In this process, cows or heifers receive the normal 14-day feeding of MGA and are then exposed to fertile bulls about 10 days after MGA withdrawal (Figure 1).

No more than 15 to 20 synchronized females should be exposed to a single bull. Producers using this program must be sure to consider age and breeding condition of the bull and results of breeding soundness examinations.

Figure 2
Physiology of the estrous cycle. 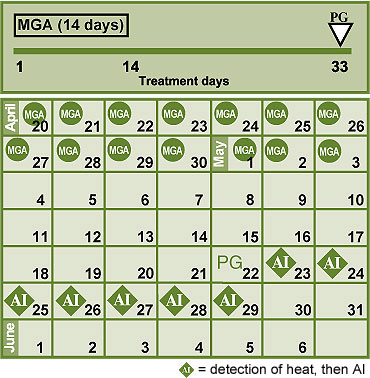 In this program, prostaglandin should be administered 19 days after the last day of MGA feeding. This treatment places all animals in the late luteal stage of the estrous cycle at the time of injection, which shortens the synchronized period and maximizes the conception rate (Figure 3). Although a 19-day interval appears optimal, 17- to 19-day intervals produce acceptable results and provide flexibility for extenuating circumstances.

Four available prostaglandin products for synchronization of estrus in cattle can be used after the MGA treatment: Lutalyse, ProstaMate, InSynch, or Estrumate. Label-approved dosages differ with each of these products; carefully read and follow directions for proper administration before their use.

Figure 4
MGA in combination with prostaglandin concentrates estrus activity in a herd and facilitates artificial insemination.

Figure 4 shows differences in the distribution of estrus under two estrus synchronization programs — MGA alone versus MGA + prostaglandin. The MGA + prostaglandin program is best suited for use with artificial insemination because it concentrates estrus activity and reduces the labor expenses associated with the breeding program. Furthermore, it decreases the amount of time required for estrus detection. Under natural mating conditions, however, there is an advantage in distributing estrus over several days with MGA alone to avoid overworking or semen depletion in herd bulls. 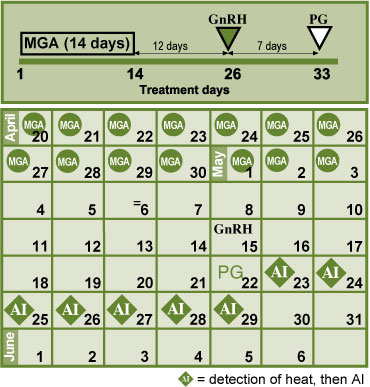 Figure 5
By incorporating both prostaglandin and GnRH, the MGA Select program improves synchrony in postpartum cows.

The MGA Select treatment is useful in maximizing estrus response and reproductive performance in postpartum beef cows. The MGA Select protocol is a simple program that involves feeding MGA for 14 days followed by an injection of GnRH (Cystorelin, Factrel, or Fertagyl) on day 26 and an injection of prostaglandin on day 33 (Figure 5). The addition of GnRH to the 14 to 19 day MGA prostaglandin protocol improves synchrony of estrus, while maintaining high fertility in postpartum beef cows. 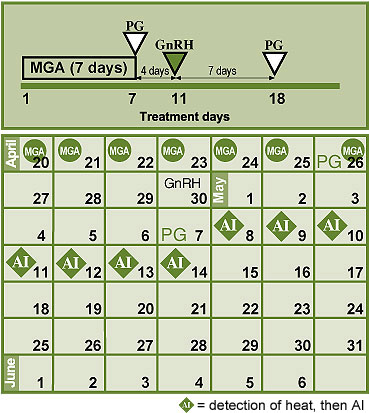 Figure 6
The 7-11 Synch program is shorter than MGA Select.

7-11 Synch is a recently developed estrus synchronization program that:

The program calls for feeding MGA for 7 days and administering prostaglandin on the last day of MGA feeding. Cows receive an injection of GnRH 4 days after PG and a second injection of PG 7 days after GnRH (Figure 6).

An additional consideration for Methods 2, 3 and 4 pertains to cows or heifers that fail to exhibit estrus after the last prostaglandin injection. In this case, cows or heifers would be re-injected with prostaglandin 11 to 14 days after the last injection of prostaglandin was administered. These females would then be observed for signs of behavioral estrus for an additional 7 days. This procedure would maximize efforts to inseminate as many females within the first 2 weeks of the breeding period as possible. Cows that were inseminated during the first synchronized period should not be re-injected with prostaglandin.

Overview
The flexibility in matching specific synchro-nization methods with the particular manage-ment system involved is one of the major advan-tages of using MGA to control estrous cycles of cattle. Before implementing any estrus synchro-nization program, remember that most failures occur when treated females fail to reach puberty or resume normal estrous cycles after calving. Estrus synchronization should not be used as a crutch for poor management. However, when administered appropriately, estrus synchroniza-tion is an effective management tool that can be used to facilitate artificial insemination, increase weight and uniformity of calves at weaning, and ultimately improve profitability of the cow/calf enterprise.

Where trade names are used, no endorsement is intended, nor criticism implied of similar products not named.