Figure 19
Spotted and striped cucumber beetles are serious pests of melons and watermelons. 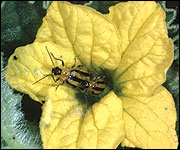 Adult beetles begin feeding on cotyledons (seed leaves) of transplants and continue to feed on the emerging leaves, stems, flowers and eventually the fruit surface (watermelon). Both species can transmit bacterial wilt (Erwinia tracheiphilia) to cantaloupes and muskmelons (Figure 23). Watermelons are not susceptible to bacterial wilt.

Cucumber beetles are very mobile. Insect exclusion screens can be used to control cucumber beetles entry into the high tunnel. Systemic insecticides applied as a post transplant drench will provide about 35 days of control, which is long enough to reduce bacterial wilt infection. Further control through the growing season can be accomplished by applying foliar insecticides. Avoid using insecticides that may be toxic to pollinating insects. There are no effective biological control techniques for cucumber beetle.