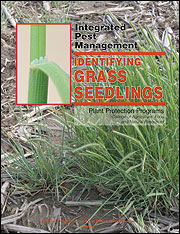 In any integrated pest management program, the first logical step is to recognize the pest. Control measures depend upon accurate identification. Grasses occurring as weeds are difficult to identify in their vegetative stages, particularly in the one- to two-leaf seedling stage of growth. At this stage, you often need to identify the grass to make important management decisions. Many grasses do not flower until late in the growing season, after they have already had an impact on crop yields.

Accurate identification is also important in the early growth stages because smaller grasses are easier to control with conventional management tactics than larger grasses. Smaller grass seedlings are more susceptible to lower dosages of herbicides, and thus greater control can be achieved while minimizing control costs. 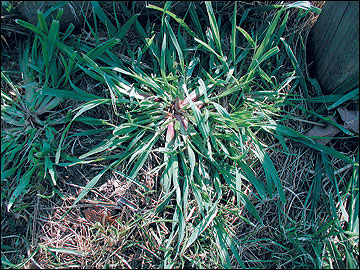 Several obvious features help you narrow the list of potential species when identifying a grass plant. First, consider the life cycle. Because some grasses are not present at certain times of the year, these can quickly be eliminated from the list. For example, you would not expect to encounter a warm-season annual grass, such as giant foxtail, in March. Likewise, winter annual grasses, such as downy brome, die back with the onset of late spring and early summer temperatures and are not present during the summer months.

The shape of the stem is another feature that is easy to determine. Most grasses have round stems, but several others have distinctly flat stems. Knowing the several common grasses that have flattened stems, you can quickly reduce the list of potential species. Some of the common grasses with flattened stems are barnyardgrass, goosegrass, orchardgrass and yellow foxtail (Figure 1).

If the stem has a triangular shape, the plant is most likely a sedge, not a true grass at all. This is an important determination because management for a grass is much different than management for a sedge. Rate and herbicide selection for control of sedges are much different. Some herbicides that are specifically designed to control grasses have no effect on sedges.

After pulling back the blade, look for the ligule. The ligule, if present, is a small projection that appears as a membrane or a tuft of hair at the base of the leaf blade (Figures 3–4). The hand lens allows you to view this structure and aids in grass identification.

Some grassy weeds have auricles, small fingerlike structures that appear to clasp around the stem at the collar (Figure 5). Common grasses with auricles that can easily be seen include annual and perennial ryegrass and quackgrass. Like broadleaf weeds, grasses vary in the amount and location of hairs on their surfaces (Figures 6–7).

Another example is the difference between Missouri’s three most common foxtails. Giant foxtail’s upper leaf surface is covered with a dense layer of hair; yellow foxtail has only sparse hairs on the section of the upper leaf blade closest to the main stem; and green foxtail’s upper leaf surface is entirely smooth. The ability to recognize these features will help you accurately identify grass species with the identification key. 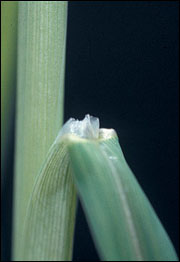 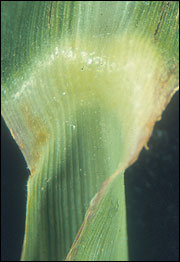 Figure 2
Carefully pull back the blade to reveal the collar region.
Figure 3
No ligule. 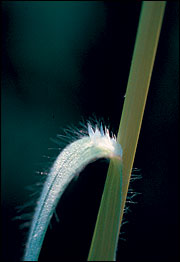 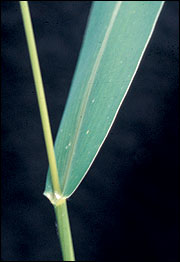 This publication is designed to assist those in agricultural and horticultural settings to identify grassy weed species. The following photographs and written descriptions will help you compare your samples for positive identification. The photographs help compare characteristics of grass species at immature as well as mature stages of growth. For effective management, positive identification of any pest, including weeds, is paramount.