Managing N fertilization in drill-seeded rice is a challenge for farmers because of potential N losses from urea volatilization before flooding and denitrification after flooding. Fields often take several days to flood after urea is broadcast, which can lead to nitrogen volatilization losses by soil microbes. Mixing a urea stabilizer with urea helps minimize losses, but growers planning to use a single N application program should monitor their fields at midseason to be sure additional N is not needed.

This guide describes two ways of using plant area measurements to determine where nitrogen should be aerially applied at midseason. We recommend applying 30 pounds N per acre at 1/2-inch IE followed a week later by 30 pounds N per acre when a monitoring program shows that rice plants are below critical thresholds.

Rice leaf color, tissue N content, and plant area measurements can be used to determine whether midseason N is needed on a rice field. MU publication MP729, Use of a Portable Chlorophyll Meter to Manage Crop Nitrogen in Rice, describes how to use a chlorophyll meter to measure "greenness" in rice leaves for estimating plant N status. Plant area measurements with a rice gauge have also been used to predict midseason N need.

The vertical board is placed in the center of a rice drill row, and the trapezoid slid to the top of the canopy. A person visually estimates the rice plant height and width. Numbers are entered in a formula to calculate plant area. Research shows that plant area values are a more reliable estimator of total plant N than leaf N concentrations and chlorophyll readings. Although rice gauges have been widely promoted by extension specialists, few crop consultants use them because of the labor required. A person must carry a clipboard and pencil to record numbers, slide and lock the trapezoid in place, and prevent the vertical shaft from falling over in the mud while backing away to estimate height and width before moving to another sample location in a field.

Figure 1
Rice leaves blocking the overhead view of inch numbers on a yardstick floating in floodwater between rice drill rows. In this illustration, the yardstick reading is 16.

To help farmers ensure that no additional midseason N is needed, researchers at the MU Delta Research Center developed a fast, inexpensive field test called the "yardstick method" (Figure 1). Experiments at Qulin and Portageville, Missouri, showed that the method did a good job of predicting yield response to midseason N. This technique enables an observer to estimate leaf canopy by counting the inch numerals visible on a yardstick floating between rice row drills. A yardstick can be purchased for less than $5 and no calculations are needed to decide whether more N is needed.

Although plant height is used as an input for estimating rice crop canopy with the rice gauge, experiments at Qulin and Portageville showed that this measurement has little value for predicting rice N status at midseason.

Plant area measurements are made just before rice plants switch from vegetative to reproductive growth. This is close to the time that is called "green ring." The "ring" is a green band of chlorophyll that can be observed on the base of the main stem of rice plants.

The number of sample locations in a rice field that you need to take measurements depends on the uniformity of the field. Generally, it is best to take at least 10 measurements in a field.

Two rice varieties (Cheniere and Francis) were tested on clay and silt loam soils over three years. No yield response was produced from midseason N when fewer than 13 numbers were showing on a yardstick floating between drill rows at 1 to 2 days before panicle differentiation. Generally, the more numbers that are showing on a yardstick, the greater the rice yield response that can be expected from applying midseason N. In research plots, a typical yield increase from midseason N in rice with 24 numbers showing was 16 bushels per acre.

Digital cameras can also be used to estimate rice plant area for making midseason N decisions (Figure 2). The major disadvantage of this method is the cost of the computer software for scanning images. In the Delta Center tests, a camera was mounted on a 5-foot rod held above the plot. Digital images were recorded 1 to 2 days before panicle differentiation. The rod was tilted at a 45-degree angle and the camera rotated to be level with the soil surface. A computer macro program developed at University of Arkansas was used with Sigma ScanTM Pro 5.0 image software (Aspire Software International, Asburn, Va.) to determine the percentage of green pixels in each photo.

No yield response was produced from midseason N when more than 64 percent of the pixels were green color in digital images. Remember to record image file names in the field to match them later to field names during the scanning process. 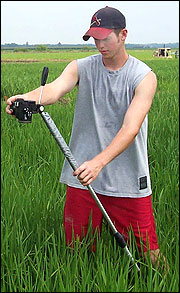 Figure 2
Digital images should be collected at a standard height for calculating plant area in a rice field.