More than 150 types of internal parasites are known to infect horses. From a practical standpoint, the most important ones are strongyles, ascarids, tapeworms and bots. The digestive tract, or stomach and intestines, is the most commonly affected area, although larvae migrate through all tissues of the horse's body.

Life cycles of strongyles and ascarids are similar in that they are classified into a large group of parasites known as roundworms (Figure 1). Bots are the larvae of an insect, the bot fly.

Internal parasites are widespread. Unless control measures are practiced, they are likely to increase and cause severe injury or death of the horse. Injury or harm inflicted on the horse is related to:

Strongyles are the most injurious, whereas ascarids, bots and tapeworms are generally less harmful. A few parasites may be tolerated by the horse without apparent signs of ill effect, but larger numbers are quite likely to be harmful. Acquiring a large number within a few days may overwhelm and kill a horse; however, getting the same number over a period of weeks or months is generally much less harmful.

Horses affected the most by parasites are young sucklings or weanlings and yearlings. In general, ascarid problems are restricted to young horses. This is because in most cases, resistance or immunity is built up by the time a horse is 2 or 3 years old. On the other hand, strongyles and bots affect horses of all ages. Even so, the young are much more severely affected than older horses. Table 1 gives a brief outline of the location, ages affected, injury and symptoms. 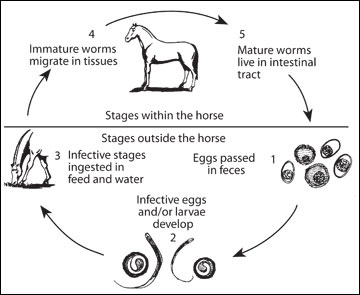 Each species of parasite has a specific life cycle. Since all of the parasites pass out in the droppings, controlling the manure is a very important step toward ridding the horse of parasites.

Strongyle eggs (Stage 1) leave the horse via the feces and contaminate the ground, paddock or pasture. Under optimum conditions, strongyle eggs hatch and develop into infective larvae in one week (Stage 2).

These larvae are encased in a thin skin or sheath, which protects them to some extent from the environment. They may live for several months. They are quite active and crawl up on grass or other pasture forage. Thus they become available to the horse and are consumed (Stage 3) in the grazing process. Some may gain access to water and become ingested during the drinking process.

After strongyle larvae are swallowed, further development occurs, but there are marked differences between large and small strongyles during this stage (Stage 4). Larvae of the large strongyle (Strongylus vulgaris) migrate extensively within the walls of arteries that supply blood to the gastro-intestinal tract. Hence they are commonly referred to as "bloodworms." Damage to the arterial walls by this parasite causes an aneurysm, an enlargement of the blood vessel.

Blood clots also form as a result of the bloodworms migrating in the arteries. These clots shut off the blood supply to the intestine and result in colic. Complete blockage of the arteries may occur, and when this happens the animal dies. Thus S. vulgaris is the most harmful and dangerous of all the internal parasites.

Development of the large strongyle larvae requires a seemingly prolonged period of time — about six months — before they become sexually mature worms. These adult worms (Stage 5) attach to the inner surface of the large intestine and are quite active bloodsuckers. The females lay eggs, which leave the body in the feces to complete the cycle.

The ascarid cycle is also initiated by the passage of eggs in the feces (Stage 1). Under favorable conditions, ascarid eggs develop to the infective stage (Stage 2) in two weeks. Ascarid larvae remain in their thick, tough egg shells, which are quite resistant to environmental conditions — pastures, paddocks and stables may remain infected for years.

Infection of the horse (Stage 3) occurs in the act of grazing or drinking materials contaminated with infective ascarid eggs. Inside the stomach, the eggs hatch and the larvae penetrate the walls. They migrate (Stage 4) in the bloodstream to the liver and to the lungs. After a short period of development in the lungs, they are coughed up and swallowed. This brings them back to the small intestine, where they develop into mature worms (Stage 5) and start egg production in about 10 weeks to complete the cycle.

Ascarids don't suck blood, but they are the largest of the parasites of the horse, attaining lengths of 10 to 12 inches. Masses of ascarids may rupture the small intestine and result in peritonitis, usually a fatal consequence.

Tapeworm eggs leave the horse in feces and contaminate the pasture. Tapeworm eggs are eaten by free-living (non-parasitic) mites (oribatid mites) which are particularly prevalent on permanent pastures. The tapeworm undergoes an essential maturation stage inside the mite. Horses inadvertently ingest the oribatid mite when grazing.

Following digestion by the horse's intestinal tract, the tapeworm is able to infect the horse. It matures into an irritating adult at the junction of the small intestine with the large intestine. Heavy tapeworm infestation may cause colic, weight loss or ill-thrift.

Tapeworm problems may be increasing in frequency in recent years. Ivermectin (which is extremely effective at killing all other parasite groups) is not effective against tapeworms, and the widespread use of ivermectin may have promoted the number of tapeworms that are able to colonize the intestine. Nevertheless, problems due to tapeworms are still relatively uncommon.

The bot cycle of development is similar in many respects to that of the worm parasites (Figure 2). The adult bot flies attack the horse and deposit eggs (Stage 1) on the hairs, principally on the legs, chest, neck, throat and around the mouth. Development of infective larvae in the eggs (Stage 2) takes one week. These eggs hatch and the larvae gain access to the horse's mouth (Stage 3) either by active migration or when the horse bites or chews at its legs, etc. Inside the mouth, the larvae invade the tongue or gums.

After a development period of three weeks, the larvae emerge, are swallowed, and attach themselves to the lining of the stomach. These larvae in the stomach are commonly referred to as "bots." They remain attached to the stomach for several months. In essence, this period spent in the stomach is a mechanism for overwintering.

In the spring and summer, the bots detach themselves from the stomach wall and are passed to the outside in the feces. The discharged bots burrow into the ground and pupate. After about three weeks, the adult flies emerge from the pupae to complete the cycle. In temperate regions, there is only one cycle completed each year. 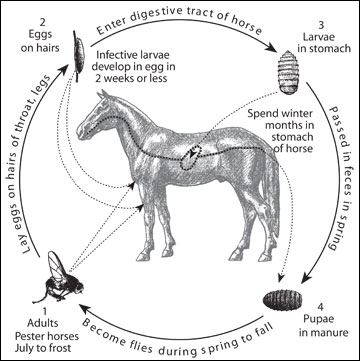 Transfer stages of these worm parasites do not actively seek the host to complete the infection process. Instead, they rely on chance to be picked up and swallowed. Thus only a very small percentage actually complete this hazardous step in the life cycle. To compensate for this, large numbers of eggs are produced by the female worms to start the transfer process.

Sanitation and management practices aid in controlling or minimizing the spread of the infections. These practices assist the natural destructive forces such as sunlight and drying during transfer stages. Susceptible animals also should have limited contact with contaminated pastures, paddocks or stables. A checklist of sanitation and management practices that have been found effective in reducing numbers of parasites includes the following:

In addition to the foregoing practices, it is generally necessary to treat the animals with specific drugs, commonly referred to as anthelmintics, to obtain effective control. These drugs remove the parasites from the intestinal tract. Thus the treated animal is relieved of the immediate damage or injury caused by parasites, but probably more important, removal of parasites breaks the cycle. This serves to reduce contamination of the environment with transfer stages, thereby limiting the spread of the infections and protecting animals from reinfection.

The best method of strongyle control currently recommended is to administer a small quantity of a deworming compound (pyrantel pamoate) to the individual horse's ration daily. This compound is marketed as Strongid-C® and is very effective in those management systems in which horses are fed individually.

The best routine deworming program that could be used for any particular management system should be designed around individual client/horse requirements and may differ depending on the number of horses on a pasture, amount of time spent at pasture compared with time spent in a stable, availability of alternative pastures (for rotational grazing), age, etc. The local veterinarian is best placed to guide the horse owner regarding the optimal deworming strategy.

If daily deworming cannot be undertaken, regular use of ivermectin is recommended (every six to 10 weeks depending on the local circumstances). Ivermectin has had a profound effect on parasite burdens in horses. It is so effective that the old-fashioned deworming strategies that used stomach-tubing or promoted the "rotation" of a number of weaker deworming compounds have become effete and are no longer recommended.

Traditionally, it has been necessary to use dangerous and toxic compounds to eliminate bots. Fortunately, ivermectin is as effective against bots as it is against strongyles and ascarids. Although tapeworm problems are uncommon, once-yearly deworming against tapeworms is recommended for horses that are dewormed with ivermectin on a regular basis (especially if the horse has access to permanent pasture grazing). The best method of deworming against tapeworms is to use a high dose of pyrantel pamoate.

The veterinarian's services can include a microscopic examination of fecal samples for an indication of the kinds and relative numbers of worm parasites in the animals. This, along with other information such as numbers and ages of animals, type and amount of pasture, provided the veterinarian with a rational basis for the selection of drugs and frequency of treatments for the particular situation.

With primary emphasis on strongyle control, some operations may require only one or two treatments per year, whereas others with factors or circumstances favoring heavy infections may take as many as six treatments per year to maintain effective control. All horses on a farm should be included in the control program. New stock or transient boarders should be treated and quarantined for a week or so before they are placed on pasture or otherwise allowed to mingle with resident horses.

Parasite infections are inherently insidious and tenacious. Success in controlling them must be a determined and sustained effort. A continuing battle must be waged against internal parasites, the most common danger to the health and well-being of horses.