What sociologists have learned

First, they have identified groups of people who are inclined to adopt new ideas at different rates. Sociologists maintain a classification somewhat like that in Chart 1.

Those earliest to adopt make heavy use of research and expert sources of information. Late adopters rely heavily on other farmers as sources. The majority use mass media channels heavily for information but turn to peers (mostly fellow farmers) for evaluation and advice.

The time span from discovering an innovation until it is adopted by most farmers varies greatly. A totally new concept may take many years. Adoption of hybrid corn, for example, took about 14 years. Hybrid milo, on the other hand, was adopted almost immediately because farmers were familiar with hybrid corn production.

Second, the sociologists found that most people go through different stages in adopting a new practice. For example, for new farm practices coming from agricultural research in colleges and industry. The steps are often like those in Chart 2A.

When local planners or others start with a problem and begin searching for alternatives, the pattern is different from the research center-to-farmer flow depicted in Chart 2A. It looks more like Chart 2B.

The selected alternatives usually are products of research. Frequently, they are ones suggested by the extension workers. Thus, irrespective of whether the process starts with awareness or a problem, the pathways to knowledge are similar (Charts 2A and 2B).

Third, the sociologists found that at each stage in the adoption process people have different information needs that extension workers (sometimes called change agents) can help to meet. The summary chart below shows:

Fourth, the researchers have learned that adoptions start slowly, pick up momentum and then decrease in rate after half or more of the potential adopters have adopted.

Table 1
Information needs of farmers at different stages of adoption

Adoption starts slowly because most people want to see successful local trial results before they adopt. That takes time. The rate of adoption increases as people begin to talk to and persuade each other. It picks up until the adopters outnumber the non-adopters. That's what puts the hump in the adoption curve. If people did not talk to and influence each other, the curve would look like a straight line. 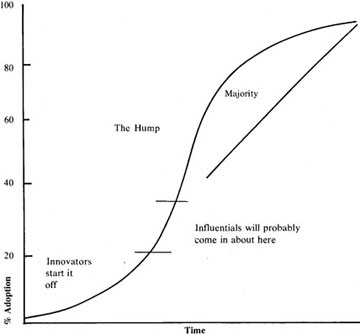 Example of technology transfer from researcher to farmer

A committee appointed by a County Extension Council to find ways to reduce the use of petroleum products (and costs) on farms hears about this new solar technology through their livestock specialist. The committee decides to set a goal of getting one third of the county's 75 confinement hog raisers to convert to the solar units in the next three years if they can prove practical on local farms. As far as the committee knows, no local farmer has tried one of the solar units.

The most likely adoption pattern

It can occur without MU Extension's help, but presumably at a slower rate.

The problem for you as a change agent is to facilitate those normal decisional-diffusion processes, not to circumvent or short-circuit them in hope of speeding up adoptions. Multiplying effects will come mostly from people talking to people and influencing each other — not directly from your newspaper item, radio talk or personal conversation with farmers, or in fact anything else you do. But you can help facilitate the people-to-people flow by well planned use of meetings, demonstrations, tours and the news media.

Ways to aid the flow

Assist innovators
A few innovators possibly will have learned about solar hog houses before you and already may have decided to try one. Your educational problem for them becomes one of helping them be successful. That is the normal thing to do anyway, but it is especially important with them because they will serve as demonstrators for others. Another educational opportunity for you is to learn the problems the innovators encounter and how they overcome them. Other farmers would like to know so they can adapt the innovations to their situations.

When one or more innovators has achieved success, enlist them in your educational effort, if possible, particularly the more influential ones This may include their involvement in tours, demonstrations, meetings and media releases or interviews featuring results. Here, as always, getting the innovation on the farm talk agenda is a prime objective.

Make others aware
While still working with innovators, start using radio, newspapers, television and any other means available to create awareness of the innovation among other farmers. In the case of the solar hog house, you can communicate details about the Experiment Station's results at first. Remember, getting additional information, thinking matters through and deciding normally takes farmers time. For example, it took five years in most cases between a farmer's first knowledge and first use of the idea of adopting hybrid corn in Iowa.

Supply details to expand discussion and interest
In the interest stage, farmers need to get more detailed information about what the innovation is, its likely consequences, what it will and will not do, how it will fit into their own plans, its cost, whether it is more useful than what they are already doing, its economic and social consequences — or in general those things that farmers want to know before accepting the innovation. When possible, they usually prefer to try a little first and more later, when that approach works.

The farm talk processes should be facilitated. The mass media may be used to keep solar hog houses on the talk agenda. Talks can be given and farmers can be encouraged to discuss the solar heating systems at meetings. Radio broadcasts and newspaper articles can communicate "what farmers are saying about solar hog houses": maybe some successful users can be enlisted as guests on radio programs.

Facilitate talk with successful users at evaluation stage
At the evaluation stage, farmers have to decide whether solar heating of hog houses is a good thing. They have to evaluate the information they have collected in light of their own personal situation. Most of all, they will be looking for local trial information and the advice of other farmers they trust. It will be helpful at this stage to do whatever can be done to get information about local trial and local results circulated and talked about. Tours to farms, where these units are in use, and meetings, where successful users are present to talk to other farmers, will help. It's important that potential adopters have plenty of opportunity to ask questions in non-threatening situations.

Change agents should always take special note of what successful farmers are saying and be prepared to communicate this to other farmers. Most farmers are much more influenced by how the innovation worked on a local farm than by results under experimental conditions at the university research farm.

Application stage
The information problem here is distinctly different. Farmers who have already decided to use a solar hog house needs simple, concrete information on how to build and operate one. They may also need to know where they can get needed building materials. Properly prepared publications would be excellent for them at this stage. They also need to know who is willing to give them first-hand information about how to solve problems. This could be other farmers, an extension engineer or a supplier or builder.

Properly informed dealers from whom farmers may purchase their materials can be helpful. Special efforts to inform suppliers can pay big dividends.

Some reinforcement information useful at adoption stage
Adoption, defined as a decision for sustained use, depends most on actual results achieved, usually as a result of one's own limited trial. The farmer's own experience is most important, but the successes of others are a helpful reinforcement. Educational efforts at this stage should present objective evidence of results both in dollars and cents and in terms of other outcomes that are important as farmers see them. Farmers, of course, should discontinue the use of solar hog houses just like anything else, when something better comes along. But they should discontinue for the "right" reason. Reinforcement information concerning results will help prevent discontinuing for the wrong reason. For example, a government subsidy is used to encourage terracing. But farmers need to be motivated to continue terracing to conserve their soil even when the subsidy stops.

Some implications of communications research:

Some points to cover in mass media