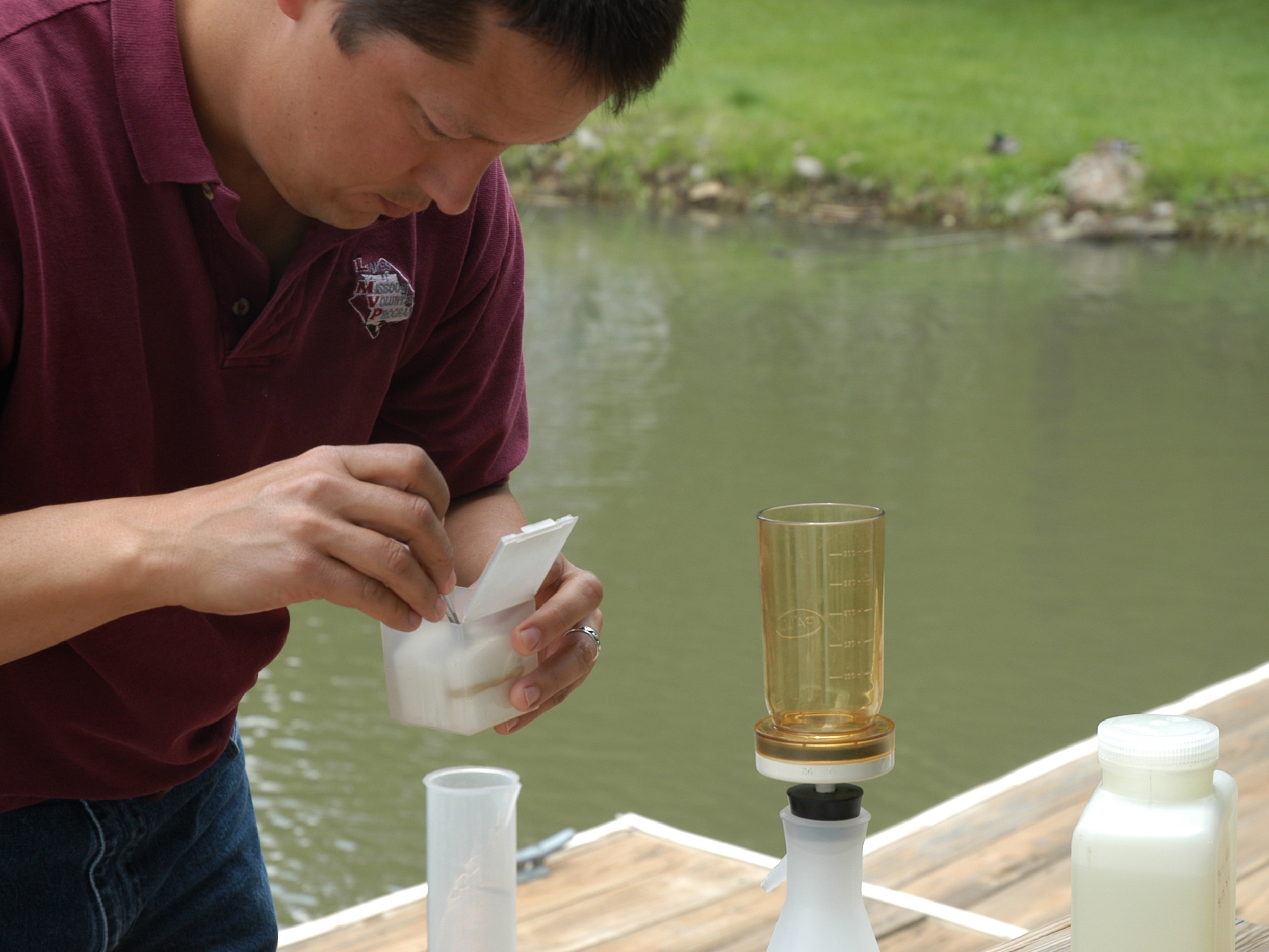 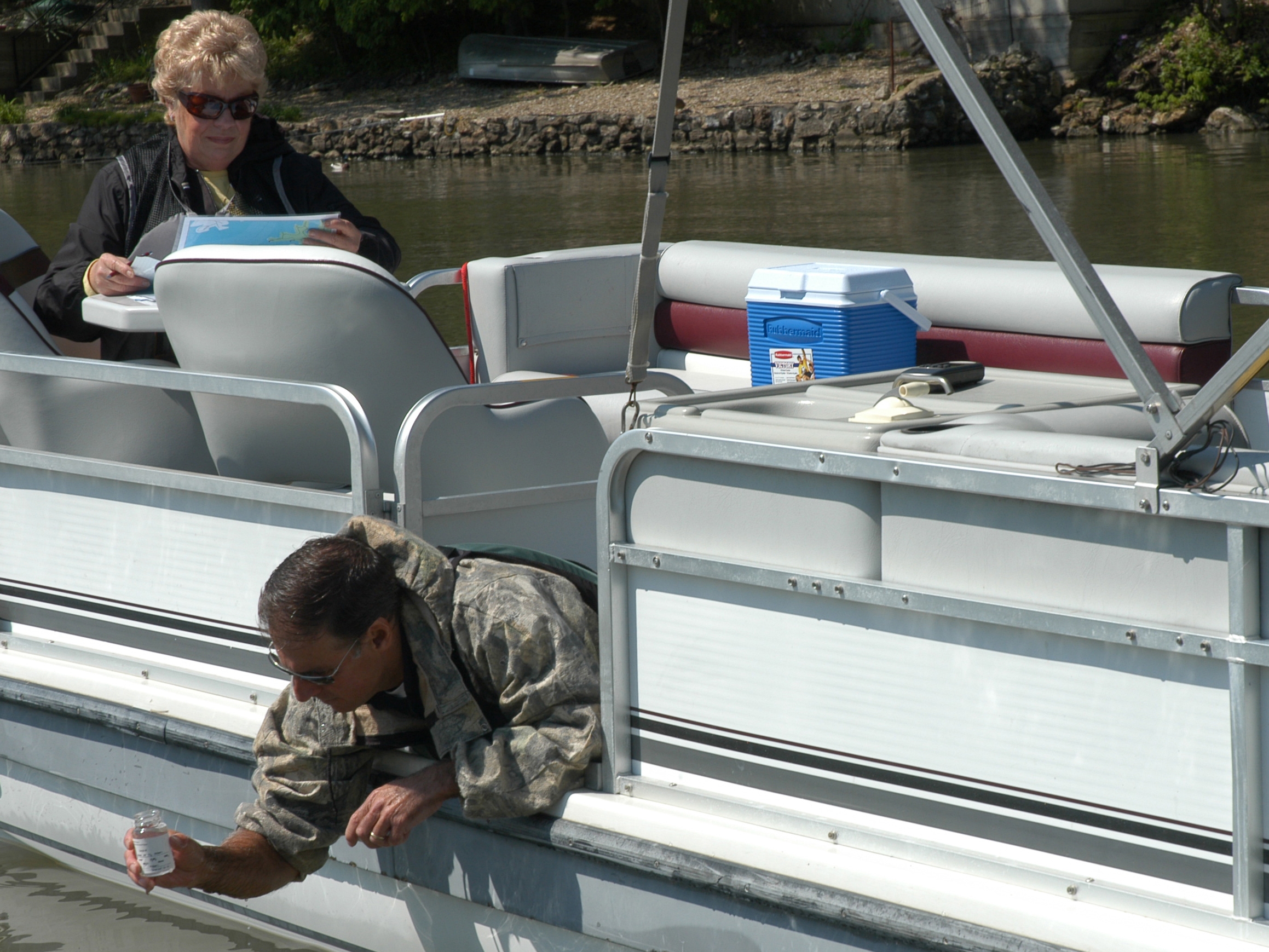 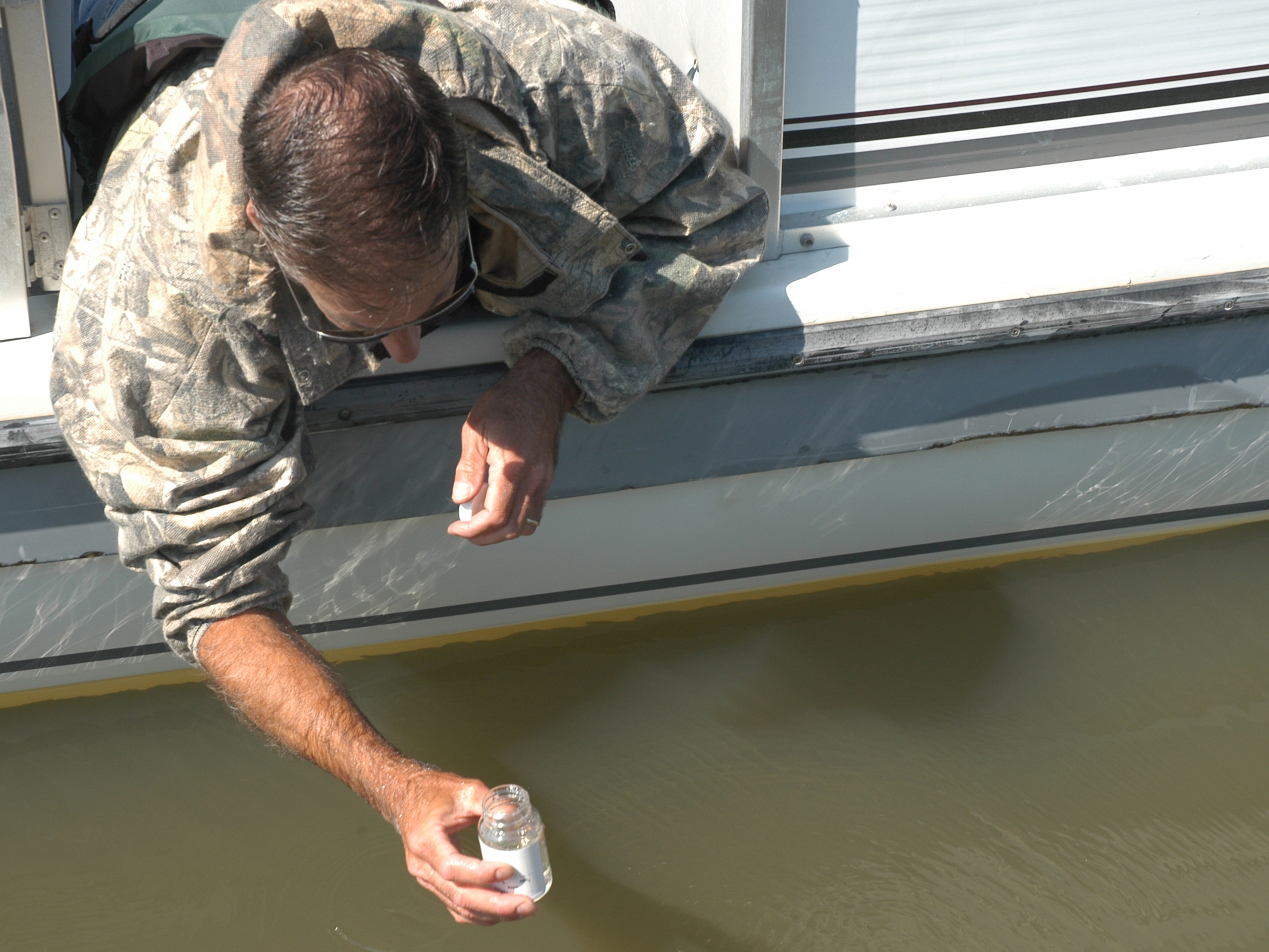 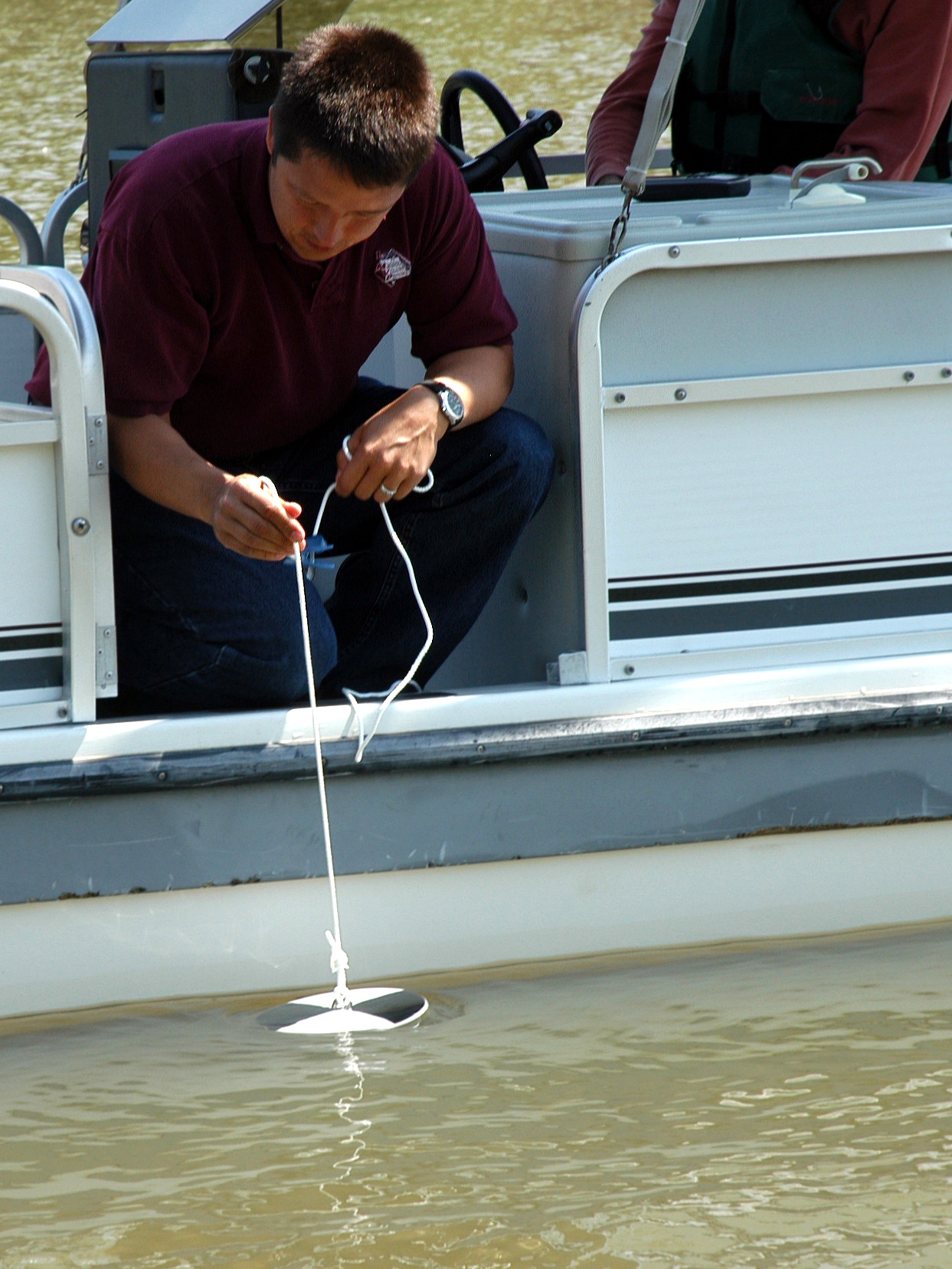 LAKE OF THE OZARKS, Mo. - Missouri's lakes are an indispensable natural resource and a key economic asset bringing millions of dollars into the state's economy each year through tourism and recreation. That makes understanding and protecting the quality of Missouri lake water a vital task. However, with almost 300,000 acres of lake surface across the state, monitoring that water is an enormous and never-ending project.

"We can't be everywhere at once," said Tony Thorpe, coordinator of the University of Missouri's Lakes of Missouri Volunteer Program (LMVP), which mobilizes volunteers to collect samples of lake water for analysis.

"Volunteers are absolutely essential for monitoring lakes," Thorpe said. "They're monitoring in 90 places that I can't get to in any given year. It would take me three years to get to all the sites that volunteers can handle in a year."

Since the program's inception in 1992, about 200 volunteers have collected samples from more than 50 lakes throughout Missouri.

"The sampling is very easy," said Thorpe. "I can conduct a training session with a volunteer and have them ready to go within two hours. The volunteers process the samples and freeze them in their homes. I drive around to pick up the samples and we'll do the analysis at the University of Missouri."

In addition to collecting samples, participants measure the clarity of lake water by lowering a saucer-sized black-and-white platter, called a Secchi disk, into the water and recording the depth at which it becomes invisible from the surface.

Water clarity is more than an aesthetic issue. A cloudy lake isn't necessarily an unhealthy one, but it can be an indicator of current or future problems. Murky lake water typically results from a combination of algae growth and sediment. Both reduce the amount of dissolved oxygen in the water, which can change the lake's fish population. Fish such as bass and trout may decline or even disappear in favor of catfish, carp and other species that are better able to thrive in a reduced-oxygen environment.

Another problem is that sediment, along with dead algae and other organic matter, gradually builds up at the lake bottom. "The lake fills in and changes from a lake to a wetland, and at that point the lake is dead," Thorpe said.

Lakeside communities can take steps to curb this process, called eutrophication, but first they need to know what's driving it. Phosphorous and nitrogen-nutrients that promote algae growth-can enter lake water from a number of sources: leaky septic and sewer systems; runoff from farms, lawns and gardens; and discharge from wastewater treatment facilities. Soil erosion can deposit sediment and nutrients into a lake.

Samples collected by LMVP participants undergo tests to measure amounts of chlorophyll (present in algae), sediment and nutrients. The resulting data helps researchers gauge the health of a lake and identify sources that might affect water quality.

The program's aim, Thorpe said, is not just to pinpoint trouble spots in Missouri lakes but also to gather baseline data that will enable researchers to record changes in a lake over time.

"The baseline data will give us the ability to compare water quality after a problem happens to water quality before the problem occurred," he said.

Thanks to its volunteers, LMVP has been able to track major improvements in water quality in three connected lakes in southwest Missouri: Table Rock Lake, Lake Taneycomo and Bull Shoals Lake.

Population growth in the area led to increased emissions of phosphorous from wastewater-treatment plants, triggering explosive growth of algae in Table Rock Lake in the 1990s. In 1999 the Missouri Clean Water Commission ordered a phased reduction in the amount of phosphorous released by wastewater facilities in the Table Rock River Basin.

LOWA offers similar incentives at the Lake of the Ozarks and has distributed maps identifying pump stations where boaters and campers can safely discharge wastewater. The organization is also measuring levels of E. coli bacteria in the lake's several hundred coves.

"The lake is in pretty darn good shape," said Donna Swall, executive director of LOWA. "We've shown that we can stress it, but we can fix those stressors."

Ways to protect water quality include the use of grass and tree buffers to limit runoff into lakes. By testing soil to gauge nutrient needs, homeowners can avoid applying excess fertilizer that could end up in lake water.

"Improving water quality is not something one person can do alone," Thorpe said. "It's going to take the efforts of many people."

For more information about the Lakes of Missouri Volunteer Program, including how to become a volunteer, visit the program's Web site at http://www.lmvp.org/. The site includes an interactive map with links to water-quality data from dozens of sampling sites.

The Lake of the Ozarks Watershed Alliance's Web site at http://soslowa.org has a similar map for data on E. coli levels in the lake's coves.

Lakes of Missouri Volunteer Program coordinator Tony Thorpe prepares to suction lake water through a filter. University of Missouri researchers will analyze the filters for sediment and chlorophyll.

Greg Stoner, a state conservation biologist and advisor to the Lake of the Ozarks Watershed Alliance, collects a water sample while LOWA executive director Donna Swall (left) consults a map of sampling locations on the lake.

Greg Stoner, a state conservation biologist and advisor to the Lake of the Ozarks Watershed Alliance, collects a water sample while LOWA executive director Donna Swall (left) consults a map of sampling locations on the lake. University of Missouri

Greg Stoner, a state fisheries management biologist and advisor to the Lake of the Ozarks Watershed Alliance, collects a water sample from one of the lake's many coves.

Greg Stoner, a state fisheries management biologist and advisor to the Lake of the Ozarks Watershed Alliance, collects a water sample from one of the lake's many coves. University of Missouri

Tony Thorpe demonstrates how to use a Secchi disk to measure the clarity of lake water.

Tony Thorpe demonstrates how to use a Secchi disk to measure the clarity of lake water. University of Missouri