SW Missouri no stranger to drought in forages 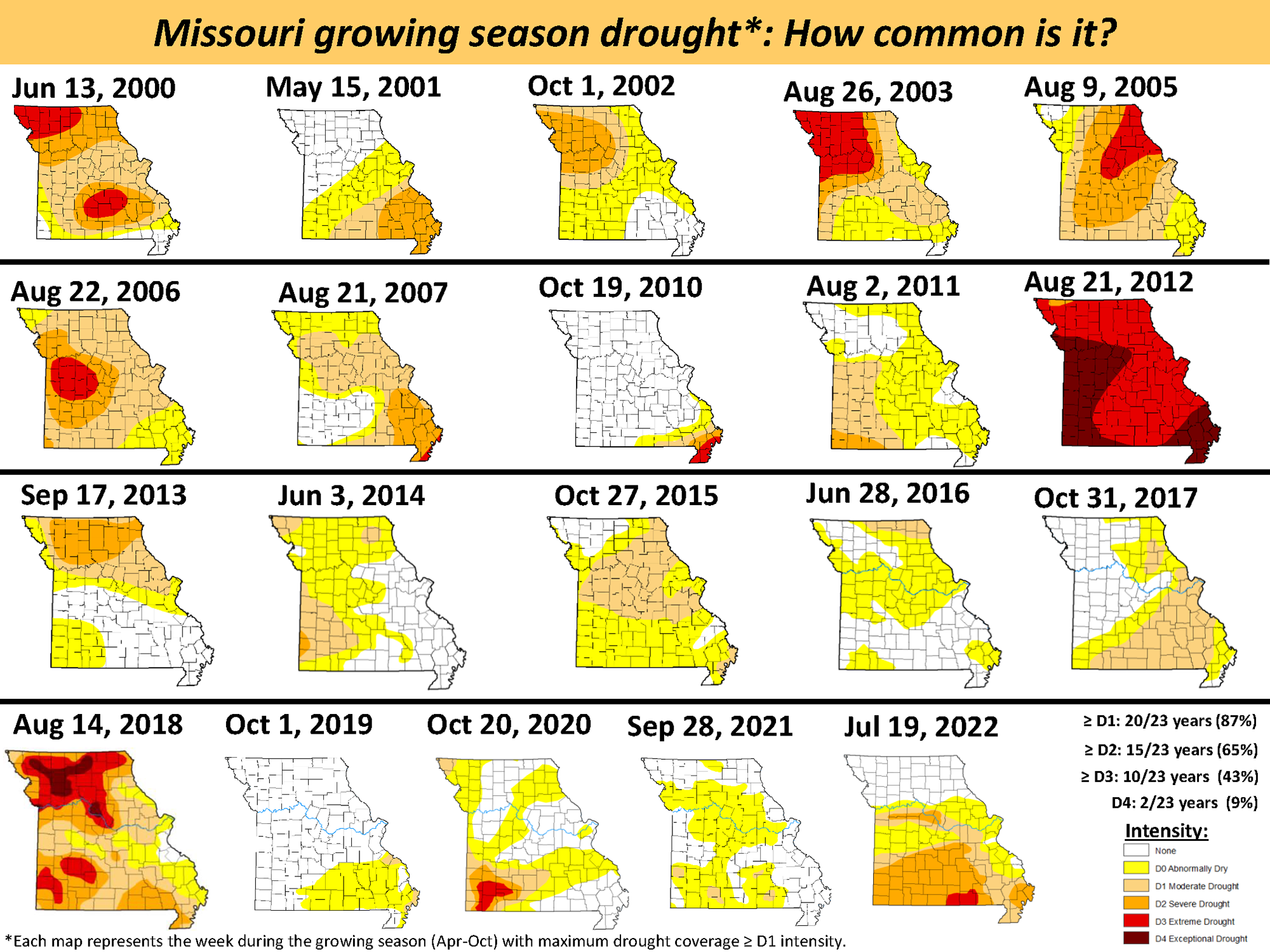 Expect more weeds next year, she says. However, many “dead” pastures may recover. How pastures recover depends largely upon the stand’s health and vigor before drought.

Graze plants no lower than 2 inches during drought. This allows plants to regrow and prevents animals from ingesting the highest concentrations of toxins located in fescue’s lower 2 inches.

Pastures are best to graze again when plants develop three or four leaves or are 6-10 inches tall.

Growers may set aside a “sacrifice” paddock to allow other paddocks to rest.

Brassica forages such as turnips, radishes and kale grow rapidly and continue to grow after frost. Bulbs below ground may also be consumed by livestock. However, limit this forage in the total diet to avoid bloat and other digestive issues. Plant brassicas in August and apply 75 pounds per acre of nitrogen at planting. Graze as short as possible and start early. Finish grazing by Jan. 1.

Most farmers plant spring oats in March or April, but they can be planted in August. With moisture, livestock can graze oats six to eight weeks after planting. Oats are not drought-tolerant and do not produce good stands under dry conditions. Kenyon recommends planting 2-3 bushels per acre and applying 30-60 pounds of nitrogen per acre.

If planted for grazing, plant wheat in August. Plant at higher seeding rates to allow for pest problems. Apply 30-50 pounds of nitrogen.

Cereal rye establishes quickly in fall. The later the planting date, the more rye becomes the best option. Hardy in drought, heat and poor soil conditions, it also is less subject to winterkill than other options. It produces more winter pasture than oats, and cows gain nearly double the pounds per acre on cereal rye than on oats.

Triticale, a cross between wheat and rye, offers wheat’s quality and rye’s toughness. Barley must be planted early but loses foliage to winterkill, limiting spring grazing. Rotational grazing is the best use of annual ryegrass. It is a good fit for thin tall fescue stands.

Other recommendations from Kenyon:

• Plant a winter-hardy cultivar of annual ryegrass in late August at 25-30 pounds per acre with 50 pounds of nitrogen at planting. Apply another 50 pounds of nitrogen in late February. Begin grazing when grass reaches 8-10 inches. Leave 3-4 inches of stubble for regrowth. If reseeding, remove livestock in mid-May.

• Plant small grains August to early October at 100-130 pounds per acre. Apply 50-75 pounds of nitrogen at planting and add 50 more pounds in spring if needed. Do not graze at less than 3 inches. Graze heavily in the spring.

More information forage producers is available from the Alliance for Grassland Renewal at www.grasslandrenewal.org. The alliance includes partners from university, government, industry and nonprofit groups.

Missouri has seen droughts in 20 of the last 23 years. Graphic courtesy Sarah Kenyon.

Missouri has seen droughts in 20 of the last 23 years. Graphic courtesy Sarah Kenyon.