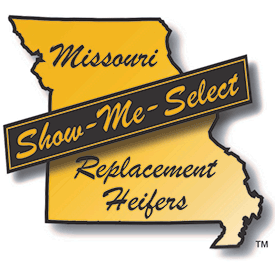 To help, SMS recently changed its fee structure. The enrollment fee, formerly $5 per head, now stands at $2 per head.

“Previously, we felt some producers were not willing to enroll all of their heifers or were unwilling to enroll any heifers if they only intended to sell a small percentage of what they developed,” says Jordan Thomas, MU Extension beef-calf specialist.

“By putting more of the fee on the actual heifers that get tagged rather than those that enroll initially, we hope to get more heifers into the program in coming years,” says Thomas.

SMS participants follow a recipe for screening, development, breeding and selection of replacement females. Since 1996, more than 900 Missouri farms and 300 veterinarians have participated, and SMS heifers have sold to buyers in 21 states, says Erin Larimore, SMS sale coordinator.

“The Show-Me-Select Replacement Heifer Program is very good at helping cow producers add value to a weaned heifer,” says Cole, one of the program’s earliest supporters. In addition to marketing efforts, the SMS program offers an opportunity to learn SMS’s Total Quality Management strategy to improve herds by retaining heifers they produce.

Missouri is in a favorable place to improve beef herds through SMS, says Cole. Although Missouri slipped to third in the nation in beef head count in the 2021 USDA National Agricultural Statistics Service report, southwestern Missouri still reigns as king of the state’s cow country. Polk County leads with 53,000 head, placing it 20th nationwide in cows per county.

“You might wonder why our cows numbers have slipped,” Cole said. “I think a lot of landowners who had beef cows five years ago may have converted to steer or heifer backgrounding or stocker programs. As owners get more mature, they like the convenience of not having cows around 365 days out of the year. After the February 2021 weather, more cows have probably been sold, or will be come weaning time in a few months.”

Learn more about the SMS program at extension.missouri.edu/programs/show-me-select-replacement-heifer-program.