Ring in the new year with black-eyed peas 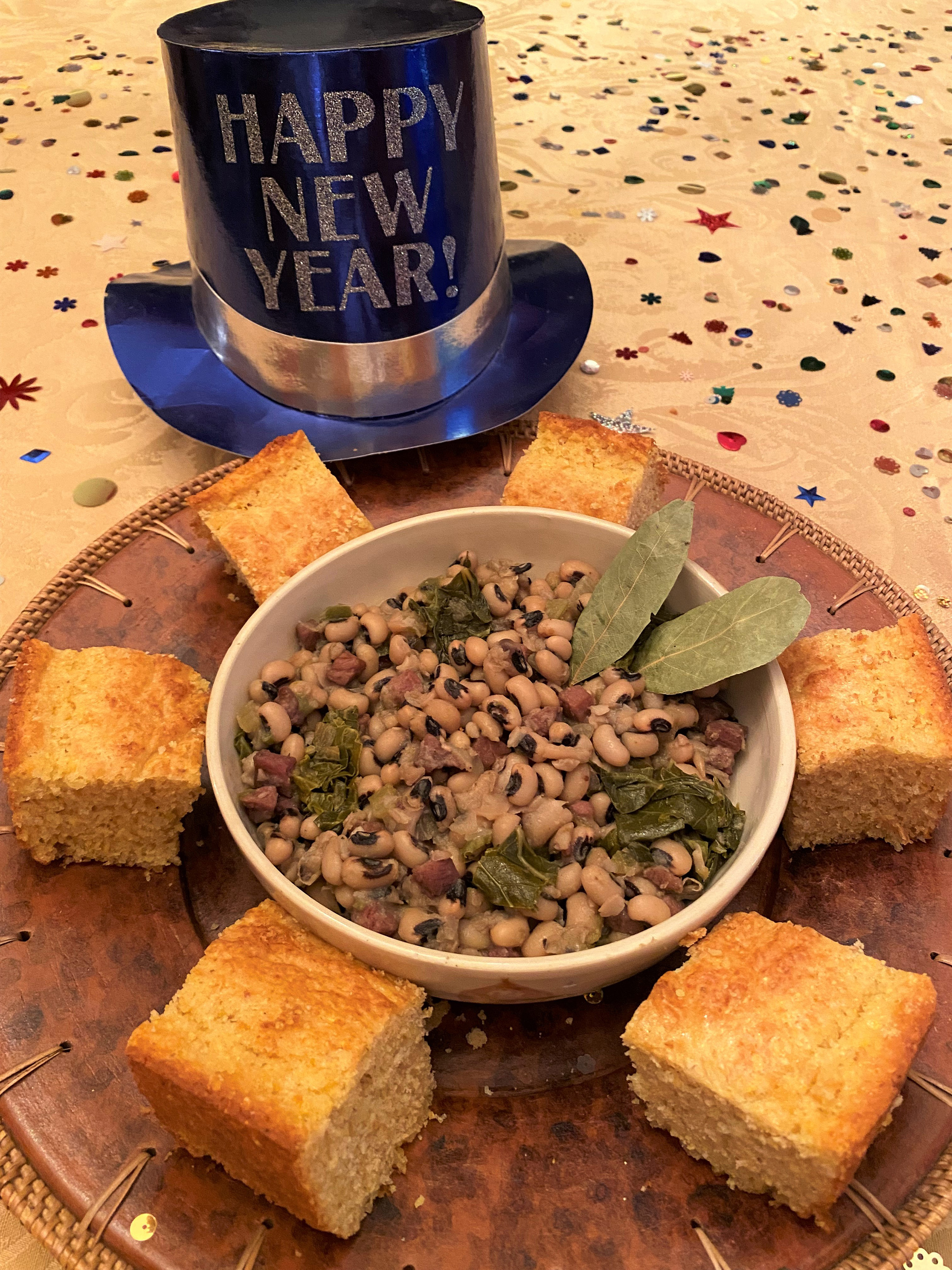 This custom dates to around A.D. 500 when people ate black-eyed peas for luck during the celebration of Rosh Hashanah, the Jewish new year. In the U.S., eating black-eyed peas on New Year’s Day is a southern tradition for good fortune in the coming year. When eaten with cornbread and collards or other leafy green vegetables, the cornbread symbolizes gold and the vegetables stand for the prosperity of green money, says Warmund.

Eating black-eyed peas in the U.S. may also go with the adage, “Eat poor on New Year’s and eat fat the rest of the year.” Adding liquid to the dry peas for cooking causes them to swell, representing expanding wealth, she says.

In another version of this custom, a clean penny or dime goes into the cooking pot. According to lore, the person served the coin will enjoy the most prosperity in the new year. This custom is not advised since a coin may become a choking hazard.

Black-eyed peas (Vigna unguiculata), also known as cowpeas, are a type of bean. Several parts of the plant are edible, including the leaves and the small, immature pods, but it is most often eaten as a dry, shelled pea. A common variety of black-eyed peas with a bush-type growth habit is Arkansas Blackeye #1, while a common vining type is California Blackeye #5.

Gardeners who want to grow their own black-eyed peas should sow seeds an inch deep May 10 to July 15 when the soil warms to at least 60 F.

Give plants with about 1 pound of 12-12-12 fertilizer per 100 feet of row in a band 2-3 inches from the base of the plants until just after they bloom. Apply sparingly, as black-eyed pea plants can fix nitrogen from the atmosphere. Plants tolerate drought but benefit from irrigation during dry periods.

In general, black-eyed peas grow like common bush or pole types of green beans but need more time to mature—about 80 days from seeding to harvest for use as a dry pea and 50-60 days for green beans.

Harvest beans when they are tender and pods snap when broken. For fresh, edible peas, delay picking until the pods and peas are larger and begin to turn yellowish but are plump and still green. Green pods and peas are highly perishable and best eaten shortly after harvest.

Cook immature black-eyed peas about 10 minutes. For dry peas, pick the pods just after they turn cream-colored, and remove the peas from the pods for storage. Before cooking, rehydrate dry black-eyed peas for at least 30 minutes.

Several arthropod pests can infest black-eyed peas. Lesser cornstalk borers, found inside stems, can cause young seedlings to collapse and die. The cowpea curculio, a small black weevil, feeds on immature pods in early summer and later deposits its eggs in the developing peas. Aphids found on green tissue can transmit viral diseases, resulting in crop loss. Late-season stink bugs can severely damage peas within pods. Mites can also be a problem during hot, dry weather.

“With a bit of work in the garden, black-eyed peas can grow successfully in Missouri,” Warmund says. “Eating a dish of homegrown black-eyed peas just might change your fate and fortune in the new year.”

https://extension.missouri.edu/media/wysiwyg/Extensiondata/NewsAdmin/Photos/2022/20221222-bep-1.jpg
Eating black-eyed peas on New Year’s Day is said to bring luck and prosperity in the coming year. Photo by Michele Warmund.

Eating black-eyed peas on New Year’s Day is said to bring luck and prosperity in the coming year. Photo by Michele Warmund.

Eating black-eyed peas on New Year’s Day is said to bring luck and prosperity in the coming year. Photo by Michele Warmund.