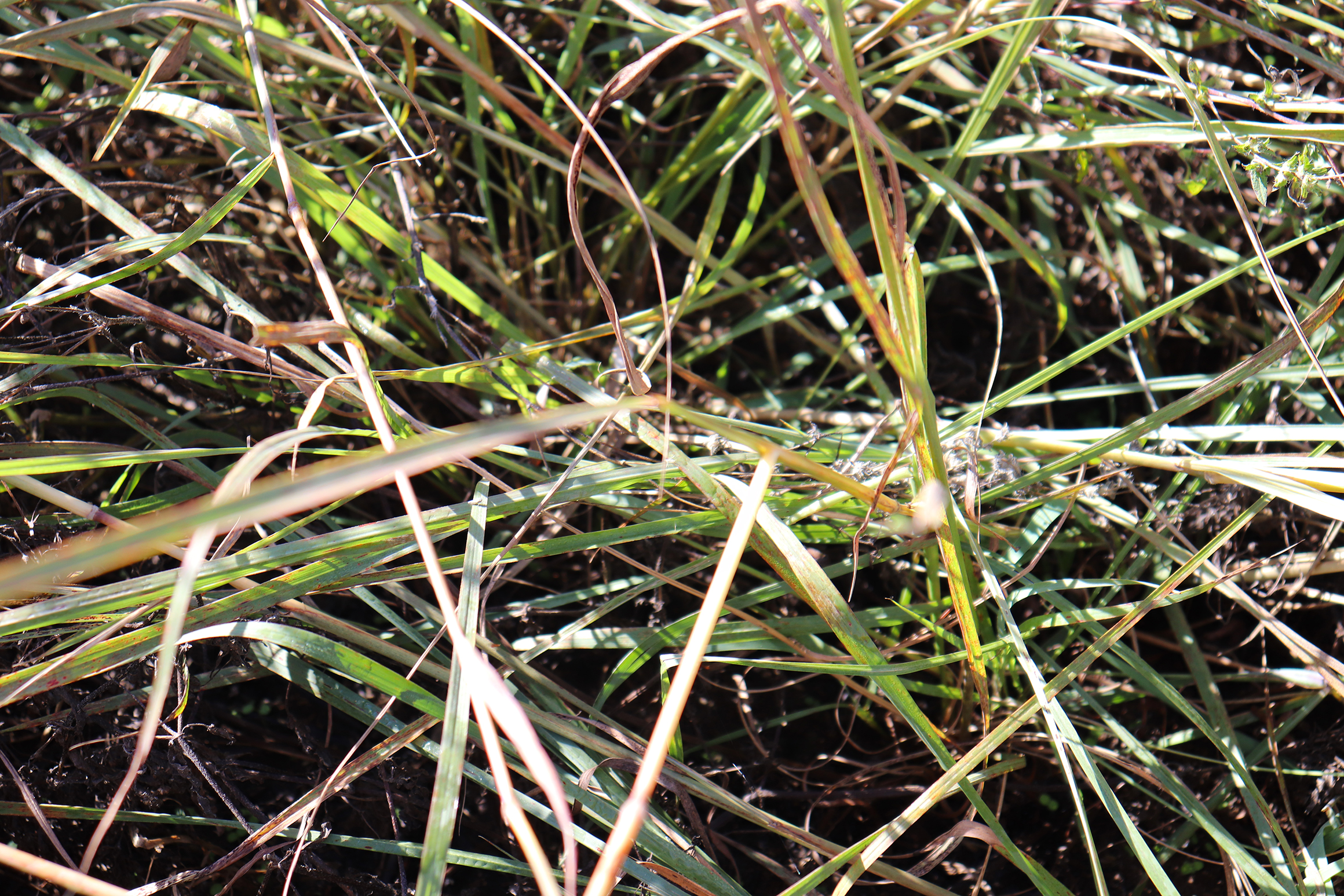 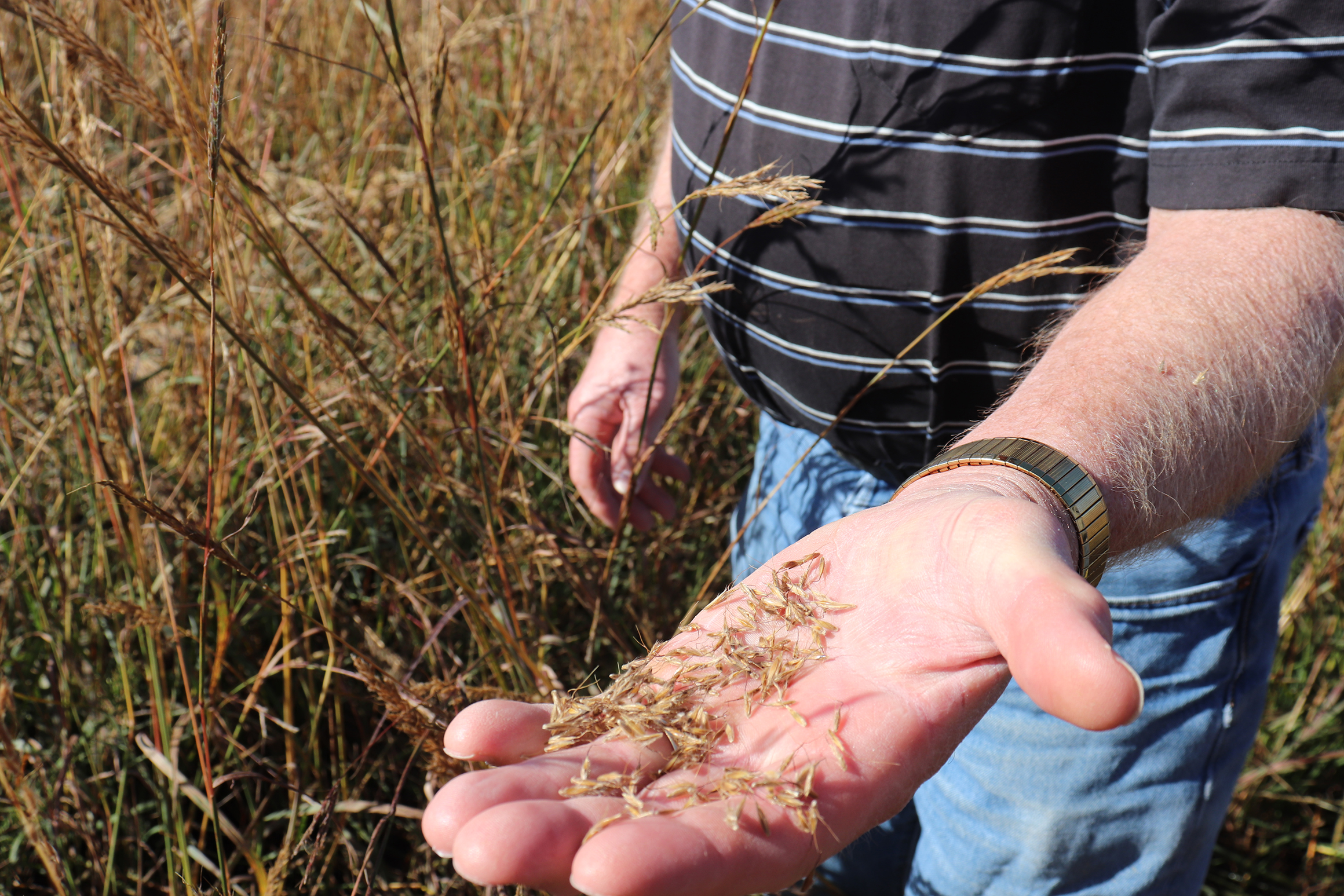 PURDY, Mo. – The sea of native warm-season grass on Gene Cowherd’s Barry County farm is a reminder of a time when buffalo grazed tall prairie grasses.

“It’s a super stand,” says Tim Schnakenberg, University of Missouri Extension agronomist and a NRCS + MU Grasslands Project team member. The project is a collaboration between the Natural Resources Conservation Service and MU Extension that provides technical advice and education to improve grassland sustainability in Missouri.

Cowherd’s success dispels the notion that warm-season grasses need three seasons to establish and produce well. “Though train wrecks do happen with native grass establishment, if a producer pays attention to details and the weather cooperates, we can expect a very high success rate the first year,” Schnakenberg says.

Cowherd is one of three Barry County producers who worked with Schnakenberg to establish warm-season grass pastures in 2019. “These producers wanted to broaden forage availability with a more highly productive, adaptive species that could be used for either pasture or hay,” Schnakenberg says.

Due to the initial investment to establish and manage warm-season grasses, Schnakenberg recommends that producers make the transition in small increments. Seed cost can be more than six times the cost of fescue.

However, natives have a lower long-term cost of production, he says. Initial costs are offset by lower nutrient needs, extended grazing seasons and less reliance on hay and feed. Producers also should see fewer problems with endophyte toxins.

Heat- and drought-tolerant warm-season grasses flourish during the summer slump when temperatures rise, rainfall diminishes and cool-season pastures decline. Including warm-season grasses in grazing systems may allow 300 or more days of grazing, Schnakenberg says. This reduces Cowherd’s reliance on other forage sources in winter and drought.

Cowherd sprayed out a wheat crop last April using glyphosate and at least two imazapic herbicides, Panoramic and Plateau. He seeded 11 pounds per acre of native grasses with a loaner drill from the county soil and water conservation district. This drill was set specifically for drilling native warm-season grasses.

Some seeds are light and fluffy, which makes it difficult to calibrate the drill properly. Cowherd made three trips over the field to insure the correct rate and get good seed-to-soil contact for a strong stand.

He applied imazapic again in July with methylated seed oil (MSO) as a surfactant. It was the first time he used the oil-based adjuvant, which boosts the performance of certain herbicides.

Despite record rainfall, grasses established well and cattle will graze there next year. NRCS + MU Grasslands Project recommends delaying of grazing until the second year. This lets grasses establish strong, deep root systems before being subjected to the pressures of grazing and production.

Warm-season grasses are gaining popularity in part because of new technology for effective in-season control of broadleaf weeds, foxtail and crabgrass.

In addition to providing summer forage, warm-season grasses offer cover for wildlife such as quail and other ground-nesting birds.

Diversity and innovation are not new at the Cowherd farm, which his great-great-grandfather bought in 1892. At one time, the family’s Windymonte Vineyard grew 70 acres of grapes for Missouri wineries. They have also raised hogs, dairy cows and poultry. The family dairy operation earned the Holstein Progressive Breeder Award four times.

Cowherd remembers when the field where the demonstration took place became eroded and unproductive due to past tillage and cropping practices. Cowherd hopes to restore pasture diversity and good soil health through research-based methods from his alma mater, the University of Missouri.

He earned a bachelor’s in dairy husbandry in 1971 and a master’s in reproductive endocrinology in 1973. However, his education did not stop there. “I just keep learning,” he says.

Learn more about the NRCS + MU Grasslands Project at extension.missouri.edu/programs/nrcs-mu-grasslands-project.