Organic produce – Is it the best choice?

Most of us would like to feed ourselves and our families the most nutritious foods we can. Sometimes, however, it is not clear what choice to make. Marketers would have us think organic is best, but a report in a Tufts Health and Nutrition Letter describes an analysis of current research that indicates that organic may not be as great as once thought in terms of nutrition. And yet there are other reasons to think organic produce is a better choice. 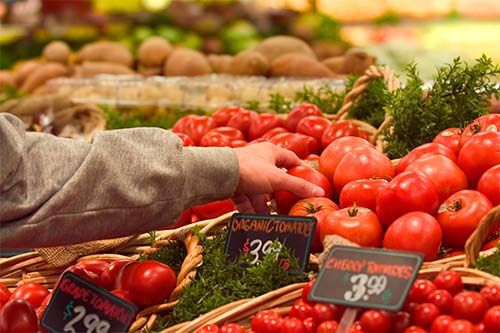 Dr. Crystal Smith-Spangler and colleagues at Stanford University looked at research done over 40 years. The studies they reviewed on organic produce, meats and dairy did not indicate that these organic options had any significant difference in nutrient value (except phosphorus) when compared to their conventionally-grown counterparts. Phosphorus is the one exception, but it is a nutrient that is not generally a concern in most people’s diets.

One reason organic produce may be considered a better choice is its expected low levels of pesticide contamination. The Tufts newsletter reports Dr. Smith-Spangler’s findings: “While 38 percent of conventional produce contained traces of pesticides – almost always below government safety limits, however – only 7 percent of organic fruits and vegetables contained detectable pesticides.” And yes, even though the produce was grown organically, there can be slight unintentional contamination via pesticide drift from neighboring nonorganic farms and transfer during transport, storage and distribution with conventional products.

So how do you select fresh, organic produce? One helpful hint at a grocery store is to look at the Price Look Up or PLU number, which can be found on the sticker on individual fruits or vegetables, on the band holding a bunch together or on the package. This number will be five digits and will start with a 9 if it is organic produce. The PLU number also indicates variety and sometimes even its size category, as well as whether it came from East/Central North America. This could be important if you're looking for something specific, such as a large, organic Empire apple grown in New England – in this case, the PLU number would be 94126. If you purchase organic produce directly from a grower, find out how the product was grown. For producers with less than $5,000 gross annual income from sales, there is no regulation to guarantee production methods. Most will be glad to explain all they have done to make their produce better for their consumers.

Consider the benefits and the hype of choosing and eating organic produce, and decide if it is worth it for you and your family.

For more information on the choice of organic produce or any other nutrition and health topic, contact your local University of Missouri Extension office.