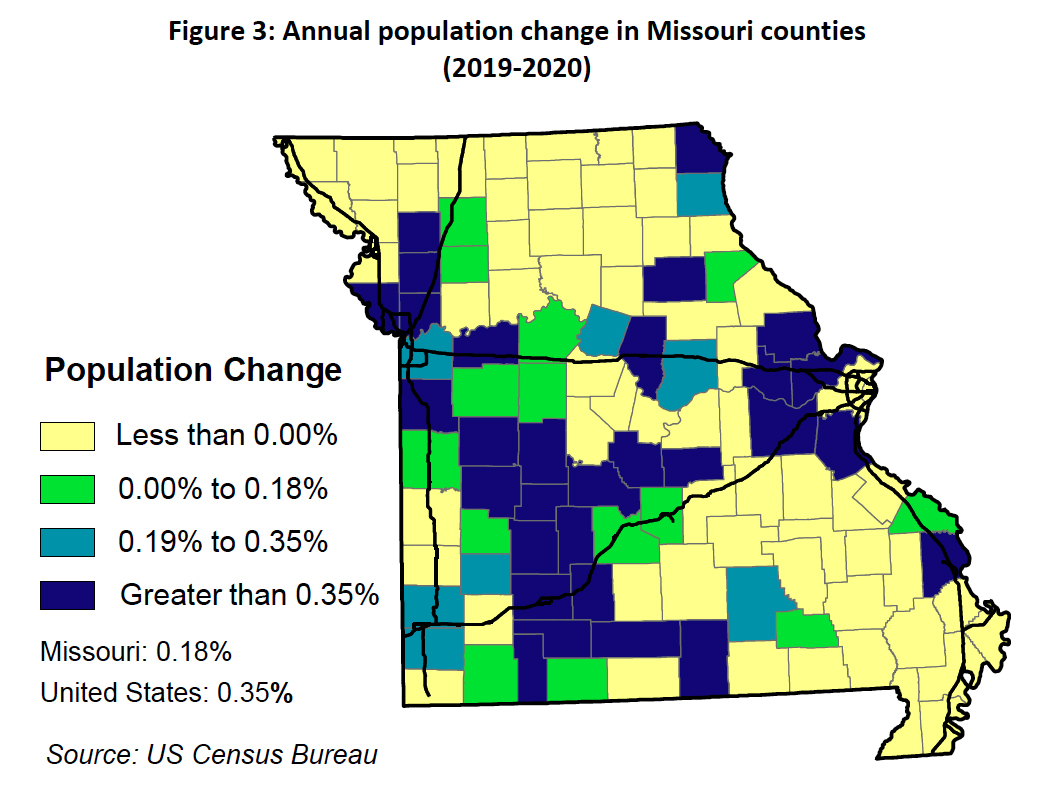 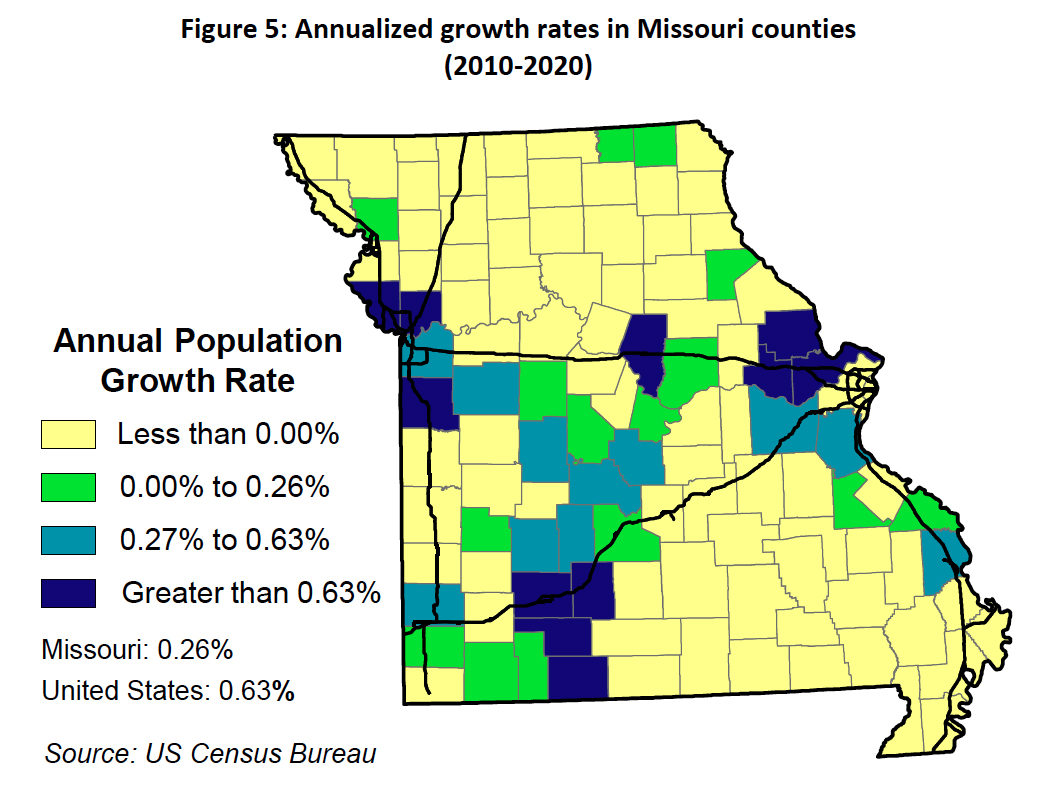 COLUMBIA, Mo. – Missouri’s population grew by about 11,000 people from 2019 to 2020. This 0.2% increase is only half the national rate of 0.4%, though it is typical of the modest growth experienced by many other Midwestern states.

But the picture gets more complicated when you zoom in to specific regions and counties. “This growth is uneven,” says Mark White, University of Missouri associate extension professor and policy research professor at MU’s Truman School of Public Affairs. For example, certain areas are seeing strong growth, such as the area around Springfield and some of the suburban areas around St. Louis and Kansas City, White says. However, many rural counties throughout Missouri are steadily losing residents.

White is the author of “Population Trends in Missouri and Its Regions,” which draws on the U.S. Census Bureau’s population estimates released in May. His report looks at population change at the state, region and county level over the past year (2019-2020) and last decade (2010-2020), during which the state’s population increased by 2.6% to 6.2 million.

White says the information can aid decision-makers in the private and public sectors by helping to pinpoint trends, opportunities, needs and areas of concern.

“This can help people understand why some places are on the trajectory they’re on,” he says.

It’s not enough to know if a particular place is growing or shrinking, he notes. The main reasons for population change can vary: There’s natural change—the number of births vs. the number of deaths—as well as domestic and international migration into or out of an area.

White says that examining these numbers in the context of other information can help create a clearer picture of who is moving in or out of a specific area and why. “A growing area that attracts retirees or second home buyers—like around the Lake of the Ozarks—may face challenges if they can’t attract or retain working-age people to keep pace with its population growth,” White says. The increasing popularity of remote work creates opportunities for some communities to attract new residents or retain existing ones, but only if there is sufficient infrastructure, including broadband access. 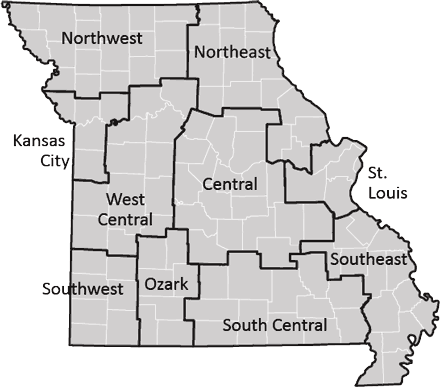 The 30-page report, available as a downloadable PDF at extension.missouri.edu/mx55, looks at population change in the state by region:

• Central Missouri’s growth has slowed over the last decade due to lower rates of natural change (births vs. deaths) and a decrease in international in-migration. Boone County, home to Columbia and the University of Missouri, was a major source of growth in the region.

• The Kansas City region, home to almost a fifth of the state’s population, added 85,000 new residents over the last decade. Platte and Clay counties were among the state’s fastest-growing counties.

• The St. Louis region’s suburban counties are among the state’s fastest growing, but the city of St. Louis and St. Louis County have been losing population, offsetting some of the region’s overall growth.

• To the north of St. Louis, growth in suburban Lincoln and Warren counties gave northeastern Missouri a net gain in population over the last decade, but most of the region’s predominantly rural counties lost population due to domestic out-migration.

• Northwestern Missouri’s population has fallen almost 5% since 2010. Buchanan County, which includes St. Joseph, lost 10% of its population in the last decade due in large part to domestic out-migration.

• The seven-county Ozark region grew 8.1% from 2010 to 2020, increasing its population by 42,300. Almost half of that increase was in Greene County, as the Springfield metropolitan statistical area was one the state’s fastest-growing regions.

• Southwestern Missouri has seen steady growth, mostly in the Joplin metropolitan statistical area, despite the disruption of the 2011 tornado. Several of the region’s largely rural counties lost population.

White plans to prepare another report after the Census Bureau releases additional population estimates this summer broken down by age, gender, race/ethnicity and other categories.

Annual population change in Missouri counties (2019-2020). From 'Population Trends in Missouri and Its Regions' by Mark White, University of Missouri associate extension professor.

Annual population change in Missouri counties (2019-2020). From 'Population Trends in Missouri and Its Regions' by Mark White, University of Missouri associate extension professor.

Annualized growth rates in Missouri counties (2010-2020). From 'Population Trends in Missouri and Its Regions' by Mark White, University of Missouri associate extension professor.

Annualized growth rates in Missouri counties (2010-2020). From 'Population Trends in Missouri and Its Regions' by Mark White, University of Missouri associate extension professor.