Move livestock to the feed to lower costs, save nutrients 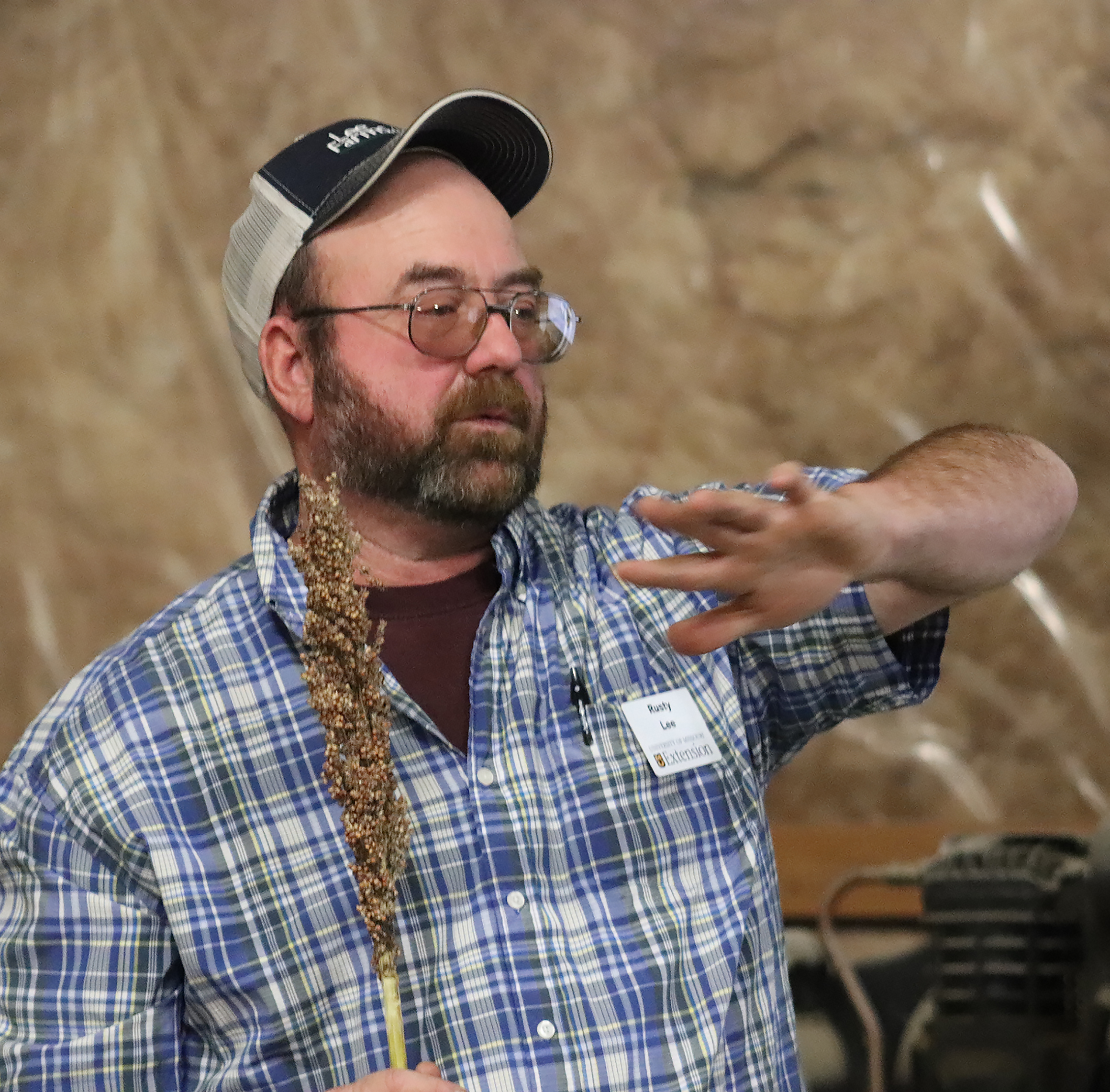 Nutrients stay on the land when cattle and sheep recycle manure by stomping it into the soil during grazing, Lee says.

Milo’s strong root system also improves soil quality. The finely branched tillers and roots add significant biomass to the soil and give the plant the support it needs to continue standing until grazed, he says.

During the past few years, Lee and other producers found success with milo as an alternative winter feed source. Lee says he now keeps hay on hand only as a backup.

Planting is normally mid-May to early June, on 30-inch rows. “The intent is grain production, as the bushels of milo per acre determines the grazing-days per acre,” he says. “While land with marginal productivity can produce grain, the higher-productivity acres will generate more cow days per acre.”

Milo in the field puts dollars back into the producer's pocket. Move the feedlot to the field to reduce equipment and labor costs for harvesting, grinding and transporting feed. Made hay costs about $1.08 per day per cow, Lee says, while bought hay is $1.26 per day per cow at $35 per bale, $1.62 at $45/bale and $1.98 at $55/bale. Grazed milo is 69 cents per cow daily on land rented at $100 per acre.

Determine yield to reduce waste and shortages, he says. Allocate acreage based on estimated yield and a cow’s daily need of 9-10 pounds of milo grain.

It is important to supplement the milo field with protein, he says. This can be through access to stockpiled fescue pasture, quality hay, or commodity feeds like distillers grains or soybean meal.

When the allocation is right, cows will eat most of the grain heads in a paddock within 30 minutes. Within two hours, they eat 70-80% of the milo leaves and stalk. Usually, only the bottom 18 inches of stalk goes uneaten.

Calves adjust to grazing on milo as they follow the lead of their mothers, Lee says.

Its nutrient value is similar to that of corn silage, Baileys says. He recommends supplements for lactating cows and backgrounding cattle.

“Cow body condition maintains and can improve over winter, even in lactating cows who calved in the fall,” he says. Body condition of calves also improves in the dead of winter.

John Turner, retired USDA grasslands conservationist, says milo’s high nutrient value makes it a valuable addition in grazing systems. Most annual crops produce seed and die. Milo does not. Nutrients, including sugar in the stalk sap, remain in the plant after frost.

However, keep cattle off milo for about seven days after frost to avoid prussic acid issues. In central Missouri, it is usually safe to put cattle back on milo fields by Nov. 1, Lee says.

Nitrogen fertilizer at a rate of 120 pounds per acre will support good yields and avoid potential nitrate problems from overfertilization, he says.

Producers get better cattle and save cash, Bailey says. Hundred-bushel milo provides 400 cow days per acre at a lower cost than silage.

Sheep and goats are less enthusiastic than cattle about milo grazing because they cannot see predators over the tall seed heads. However, Truxton area sheep producer Harry Cope found success with strip grazing. He says that sheep graze the outer edge of the field first and work their way to the center.

Lee says milo strip grazing requires some additional labor that one person can handle. Cattle must be moved to a new paddock each day; goats and sheep need a new location every one to three weeks.

Make those moves easier by avoiding steel posts, which are difficult to move after a freeze, Lee says. Polywire fencing works in snow and ice. Choose small-diameter wire over polytape that will sag.

As with any new crop, Lee recommends that producers start with a few acres to see if the change is right for their operations. “Plant a few acres and stick your toe in the water.”

Download a PDF of Lee’s presentation on strip grazing milo at plantsciencesweb.missouri.edu/cmc/pdf/2019/lee.pdf.

https://extension.missouri.edu/media/wysiwyg/Extensiondata/NewsAdmin/Photos/2020/Lee-Cope-milo.jpg
Truxton farmer Harry Cope grazes sheep on milo pastures. A side benefit of grazing on milo is that nutrients stay on the farm when livestock stomp manure into the soil. Photo by Linda Geist.

https://extension.missouri.edu/media/wysiwyg/Extensiondata/NewsAdmin/Photos/2020/milo-sheep.jpg
Sheep and goats appear less enthusiastic than cattle about grazing on milo because they cannot see predators over the milo heads. Farmer Harry Cope finds that sheep graze from the outer field edges to the center. He says he sees benefits to rotational grazing of milo pastures for his herd. Photo by Linda Geist.