Irrigation and water use efficiency

Total Missouri water withdrawals from groundwater and impounded surface water sources in 2010 were estimated to be 8,570 million gallons per day (Mgal/d). Water used for irrigation accounted for 16.3% (1,400 Mgal/d) of total water used in Missouri during 2010. Irrigation is the second-highest use of water in Missouri.

Source: USGS, Estimated Use of Water in the United States in 2010. Irrigation includes urban irrigation, such as golf courses and parks.

In 2013, Missouri had 1.2 million acres of irrigated farmland. The map below shows irrigated acres by county in Missouri during 2010. The majority of irrigated acres were located in southeast Missouri and along the Missouri River. The 10 counties which make up the bootheel region of Missouri — Bollinger, Butler, Cape Girardeau, Dunklin, Mississippi, New Madrid, Pemiscot, Ripley, Scott and Stoddard — accounted for 85.8% of Missouri’s irrigated acres.

Map of irrigated acres in Missouri by county, 2010 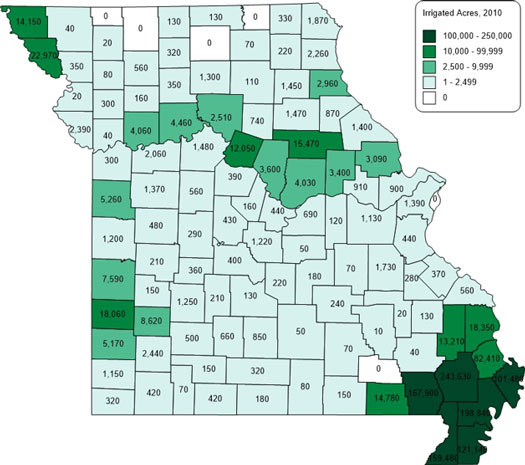