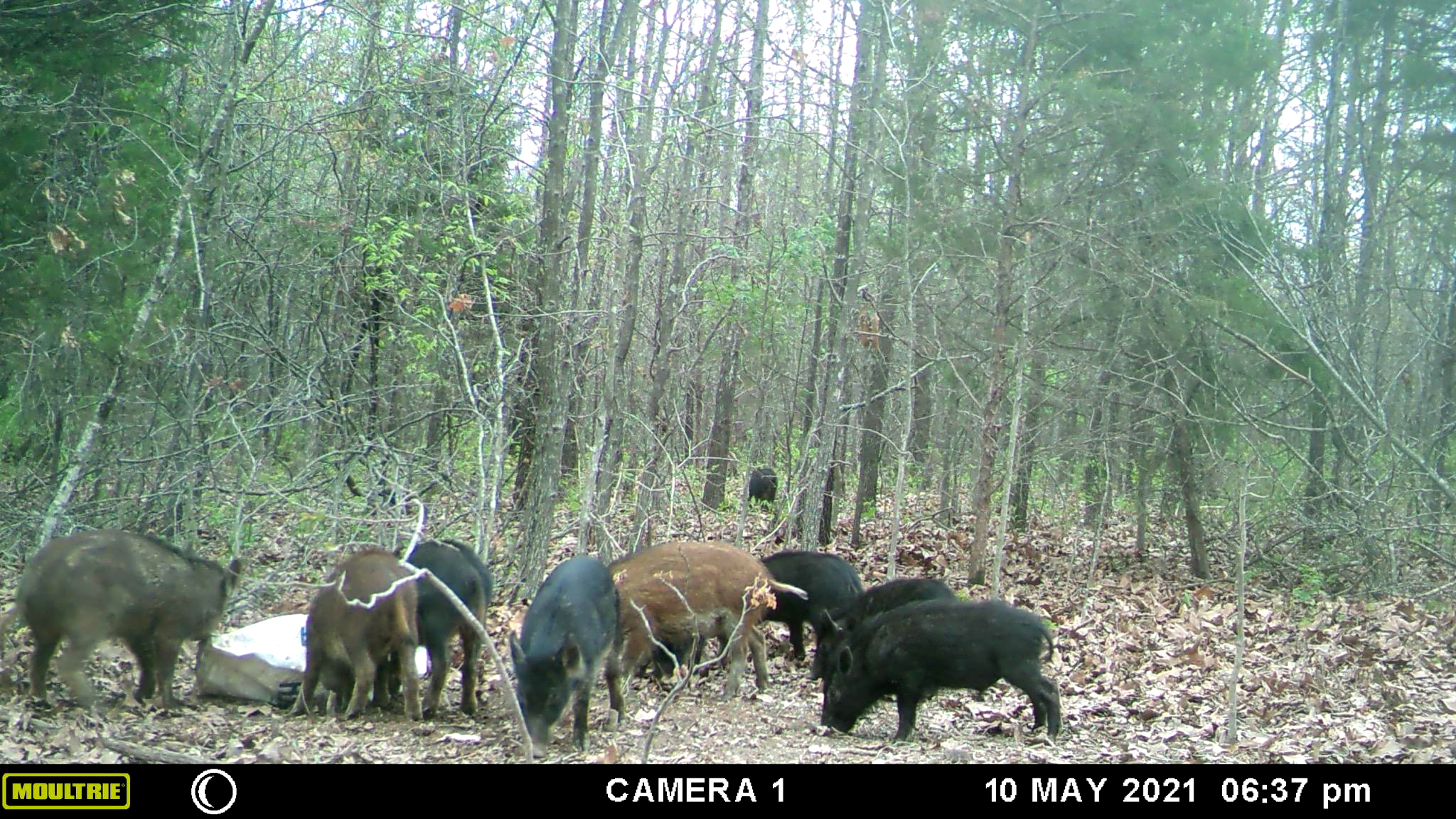 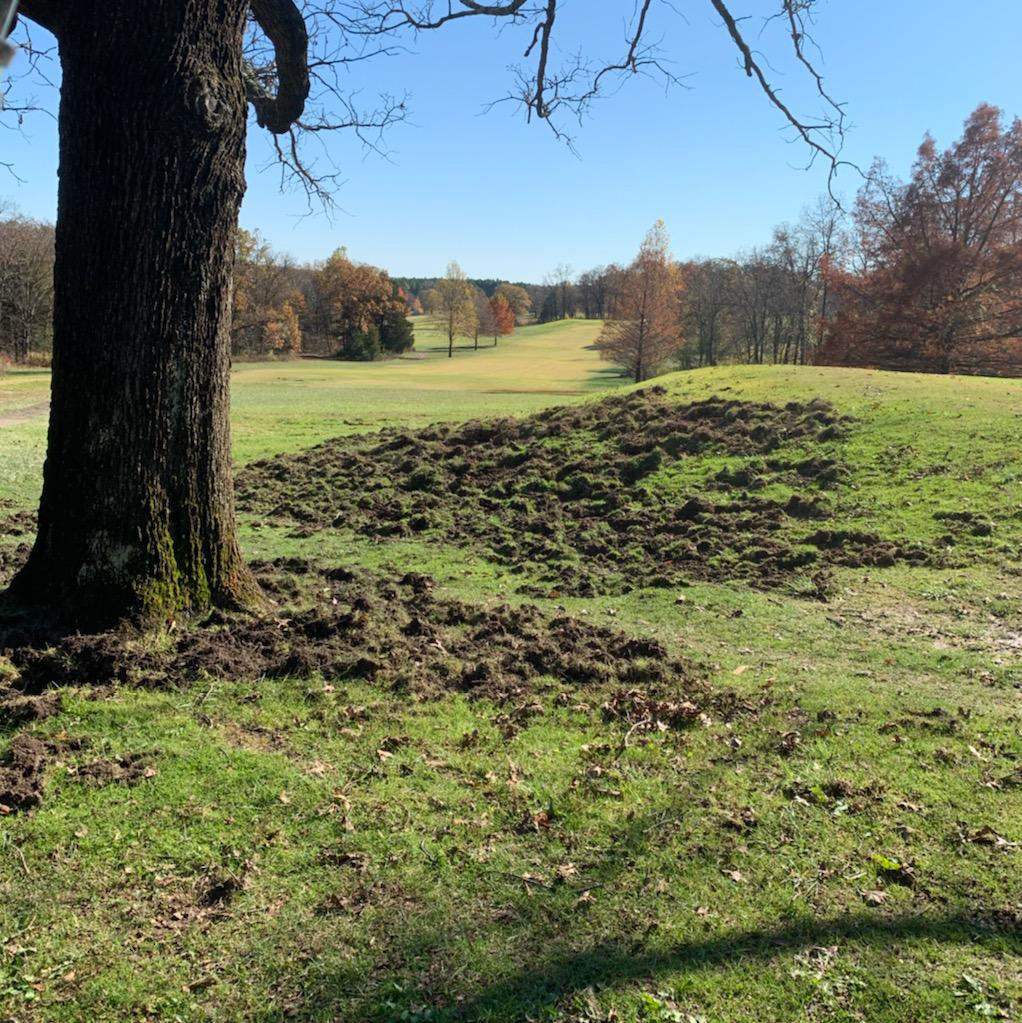 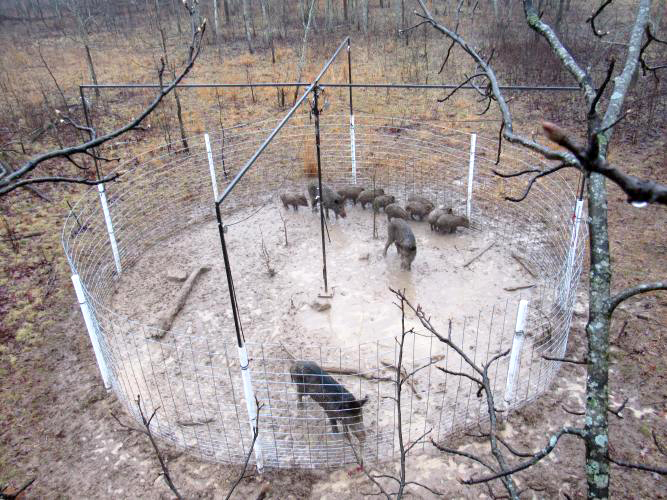 COLUMBIA, Mo. – Having grown up on a farm in the foothills of the Missouri Ozarks, Jerry Richards was prepared for droughts, snowstorms and torrential rains. He wasn’t prepared for feral hogs.

Richards, a retired high school teacher, has a cow/calf operation on the same 500-acre Century Farm where he was raised. He’d heard that feral hogs, which roam in groups called sounders, could tear up fields. He imagined the results would look like a muddy football field after Friday’s game. But when a sounder invaded his farm and trampled over a hay and pasture field, Richards said, it looked like someone had set a drunk loose with a skid-steer loader.

“I started getting damage about three years ago,” he said. “I trapped on my own with assistance from the (Missouri) Department of Conservation for two years, and then got a trapper about this time last year. To date, we have removed over 200 hogs from the farm.”

Richards recently joined University of Missouri Extension as a cooperative feral hog outreach educator. In addition to Richards, who is based in Iron County, MU Extension has hired Kevin Crider in Dent County and Megan Crane in Douglas County. A fourth educator is being sought for Butler County. Funding for the positions is through a United States Department of Agriculture (USDA) grant managed by the Missouri Department of Conservation (MDC).

The Missouri Feral Hog Elimination Partnership has removed more than 54,000 hogs from public and private lands since 2016, but there’s more work to be done. Outreach efforts by the MU Extension educators take the form of presentations, workshops and demonstrations, as well as conversations with individuals seeking assistance. They will connect landowners wanting to eliminate feral hogs on their property with partnership trappers. “Once the sounder has been eliminated, the educators will then connect them with their county soil and water conservation board to gain access to equipment to help them restore their damaged fields and pastures,” says Hank Stelzer, MU Extension natural resource education director.

Found in at least 35 states, feral hogs represent a serious economic and ecological danger. They can also spread a host of diseases and parasites to livestock. The USDA’s Animal and Plant Health Inspection Service (APHIS) has estimated that damage from feral hogs totals $2 billion per year.

Feral hogs are well-equipped to wreak havoc. They can grow to 300 pounds or more, run 30 mph and detect tempting smells from miles away. Their jaws are strong enough to crack hard-shelled nuts and break the bones of animal carcasses. And they are not picky about what they eat. Their diet is mostly plants, but they will also prey on smaller wildlife, including turkey eggs and deer fawns. Roaming sounders will wreck fences and trample vegetation. When they root in the ground for food, they leave behind damaged crops, deep holes, softball-sized rocks and large clumps of soil.

Missouri’s feral hogs are primarily found in the southern part of the state, within at least 27 counties. In the 1990s there were attempts to manage Missouri’s feral hog population through recreational hunting. But with sows normally having two litters per year, birthing four to five piglets per litter on average, hogs reproduce faster than they could be hunted down. Moreover, shooting a couple hogs in a sounder leads the rest of them to scatter. The survivors learn to be afraid of humans and wary of attempts to lure them with food.

Current efforts center on trapping. Large traps can capture an entire sounder at once: In a typical trap, a circular metal enclosure is suspended above the ground. Bait – typically corn – is placed immediately below. The site is checked daily or sometimes monitored by camera. During winter, aerial operations are conducted with drones and a helicopter operated by USDA APHIS.

According to Jason Jensen, MDC feral hog operations incident commander, the partnership’s efforts since 2016 have resulted in a 48.5% decrease in the number of watersheds in Missouri occupied by feral swine.

“Estimates of feral swine abundance statewide, measured as the catch per unit effort, have decreased from 2016 to the present, with a year-by-year decrease from 2019 to 2021,” Jensen said. “Anecdotal field reports from trappers indicate feral hogs are becoming rarer in the landscape and sounder sizes are decreasing over time.”

While MDC and the other organizations in the 18-member feral hog partnership have made considerable progress, they have struggled in allocating resources between raising landowner awareness and the actual trapping and elimination of hogs, Stelzer says.

“That’s where our educators come into play,” he says. “They are not here from ‘the government’ to tell landowners what to do. The team has strong connections to the land and their communities.” Both Richards and Crider have Missouri roots and have seen the damage to area fields and pastures firsthand.

The partnership assisted 1,308 landowners in 2021, Crider says. “Many landowners have had very good success with the partnership on their properties, which is a testament to the progress made in the removal of feral hogs in the state.”

https://extension.missouri.edu/media/wysiwyg/Extensiondata/NewsAdmin/Photos/2022/20220314-fh-3.jpg
Traps like this one can catch an entire sounder of hogs all at once. Photo courtesy of the Missouri Department of Conservation.

Feral hogs caught on camera at a bait site on private land in Crawford County. Photo courtesy of Kevin Crider.

Feral hogs caught on camera at a bait site on private land in Crawford County. Photo courtesy of Kevin Crider.

Traps like this one can catch an entire sounder of hogs all at once. Photo courtesy of the Missouri Department of Conservation.

Traps like this one can catch an entire sounder of hogs all at once. Photo courtesy of the Missouri Department of Conservation.