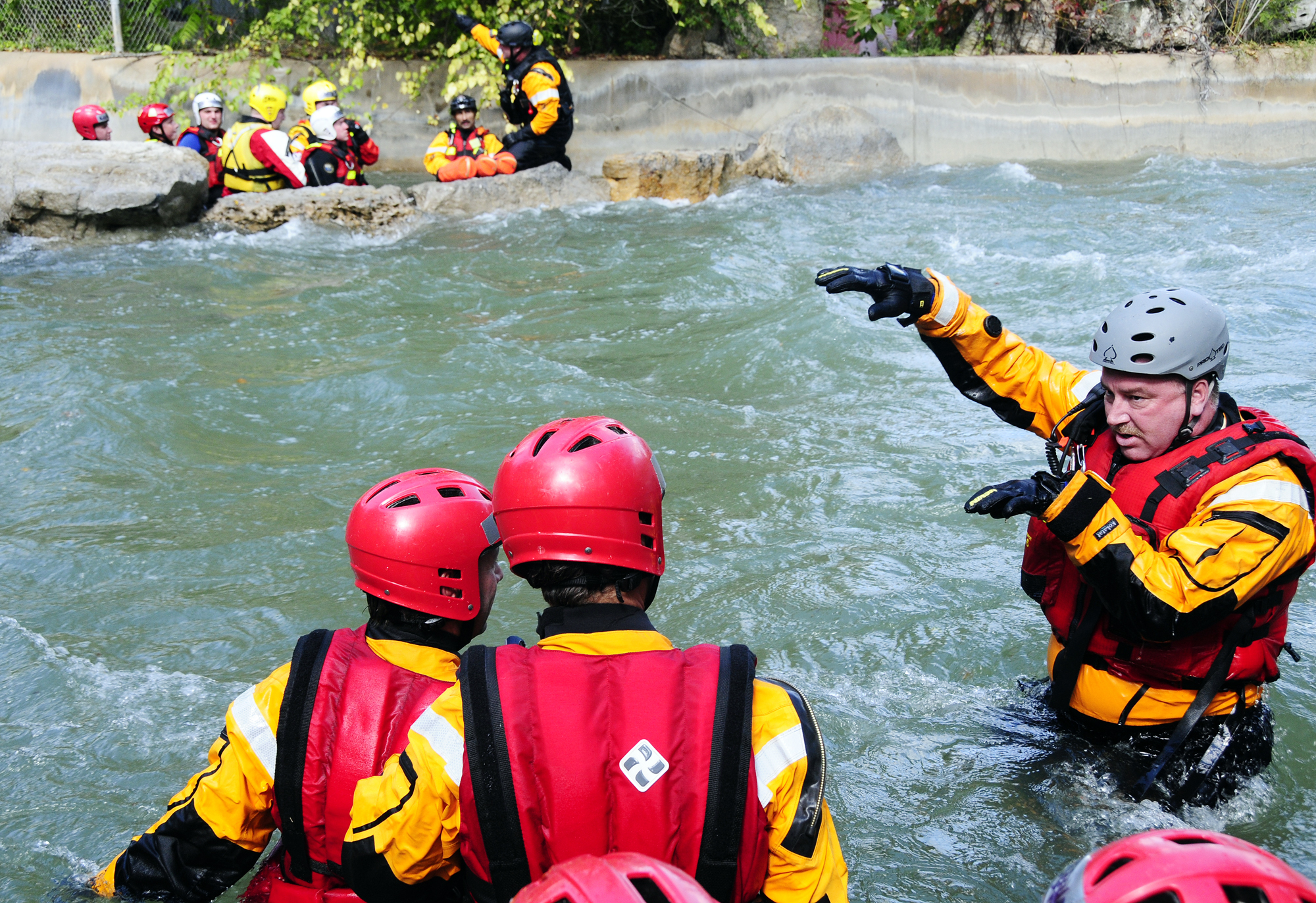 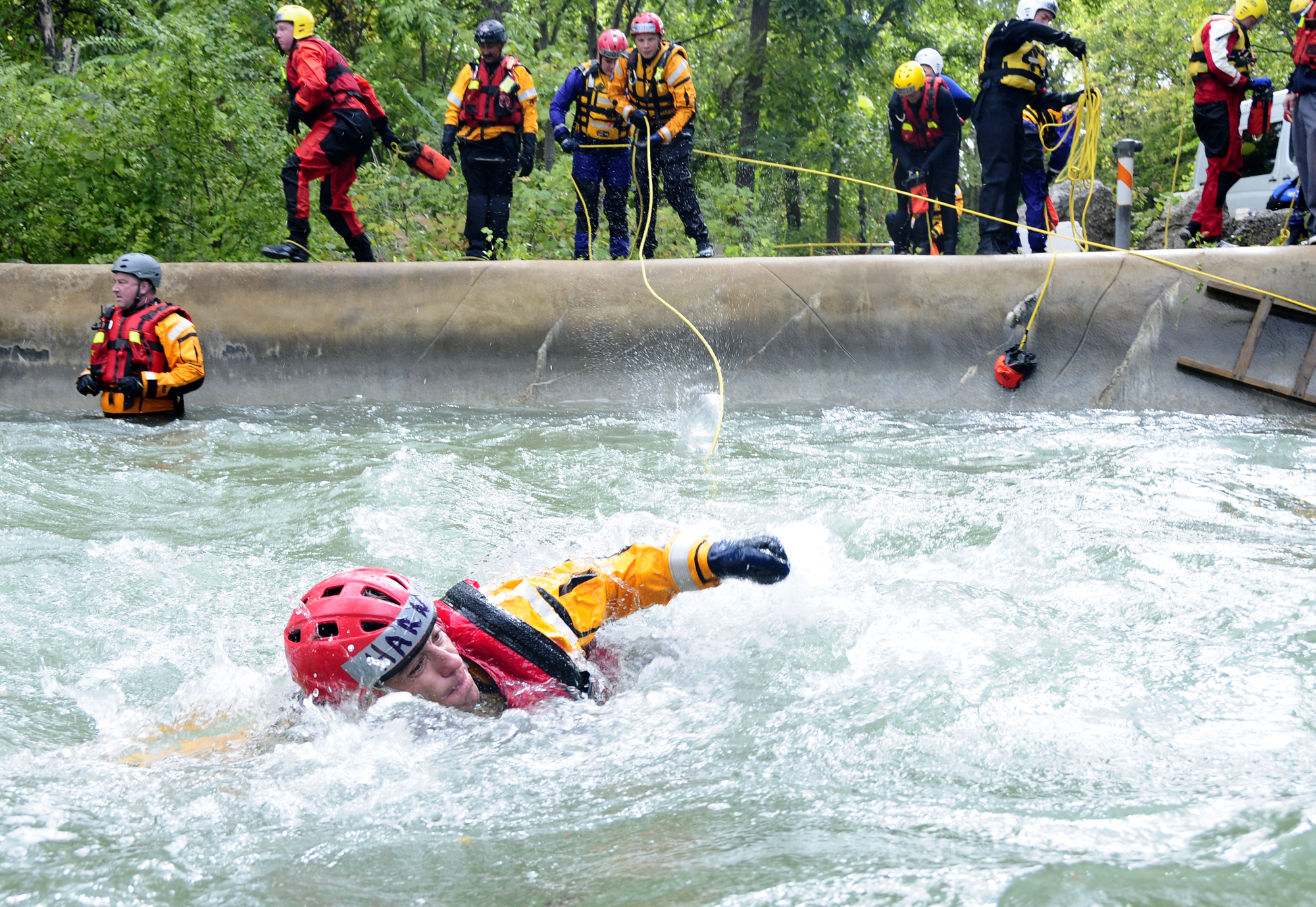 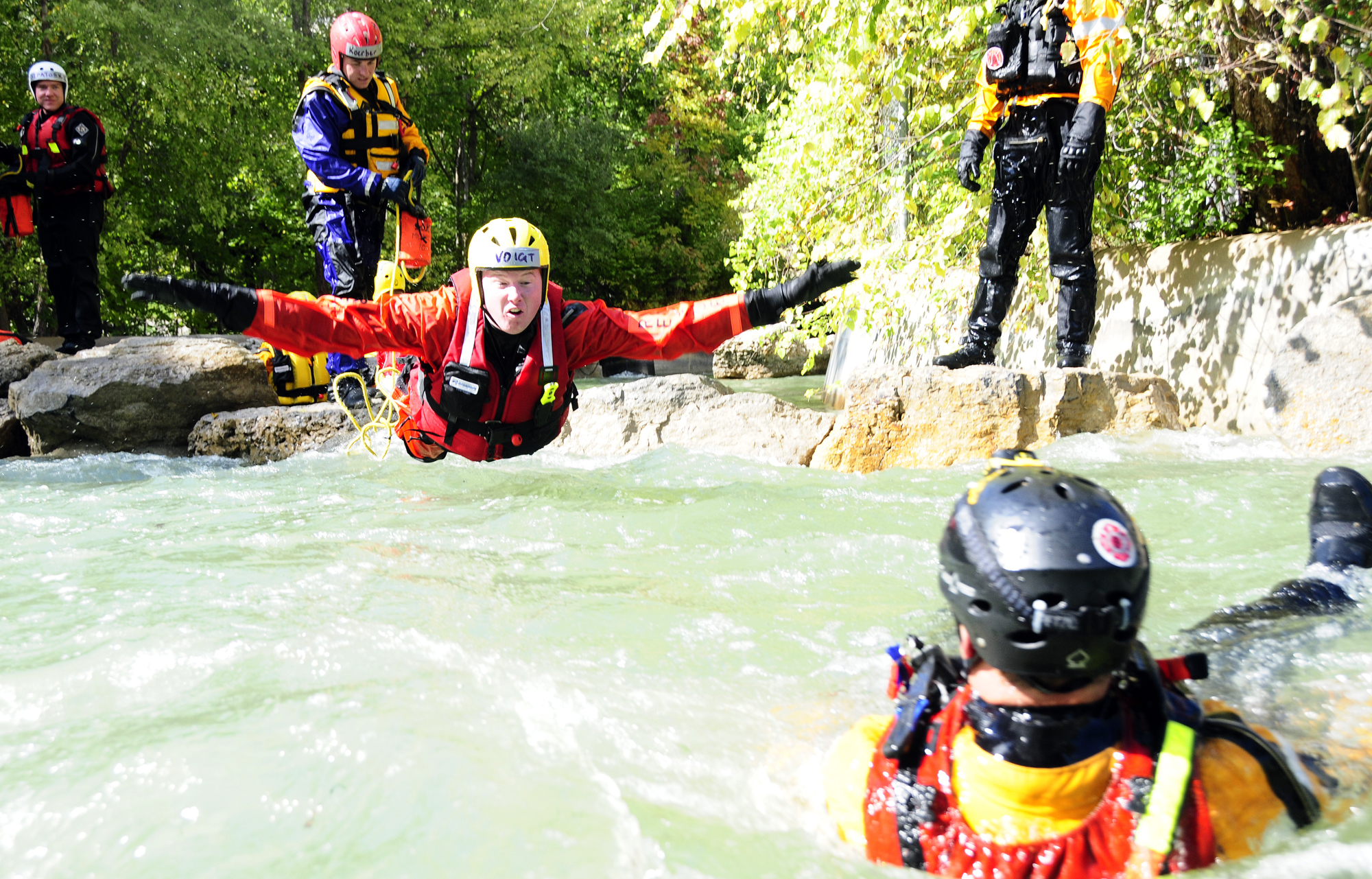 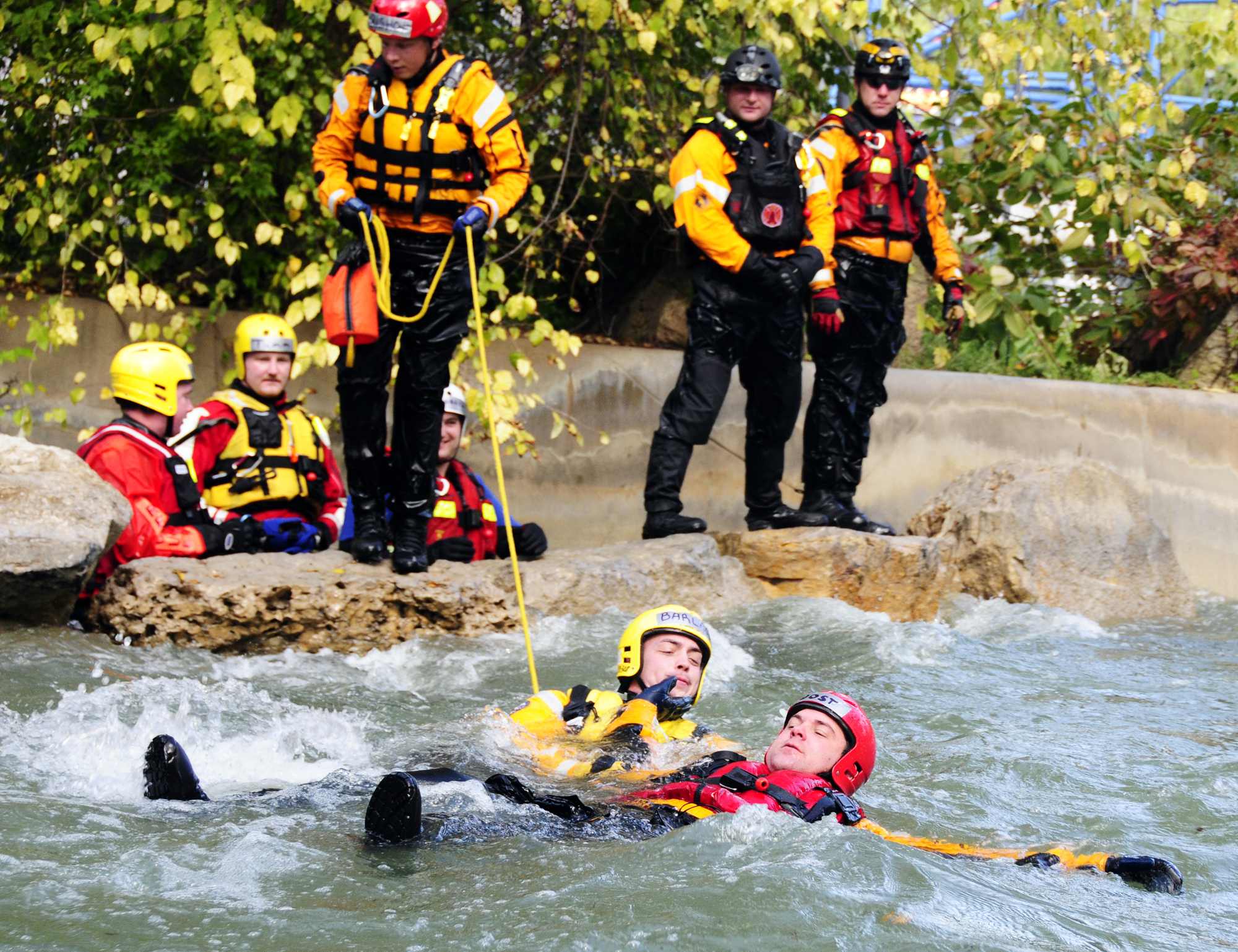 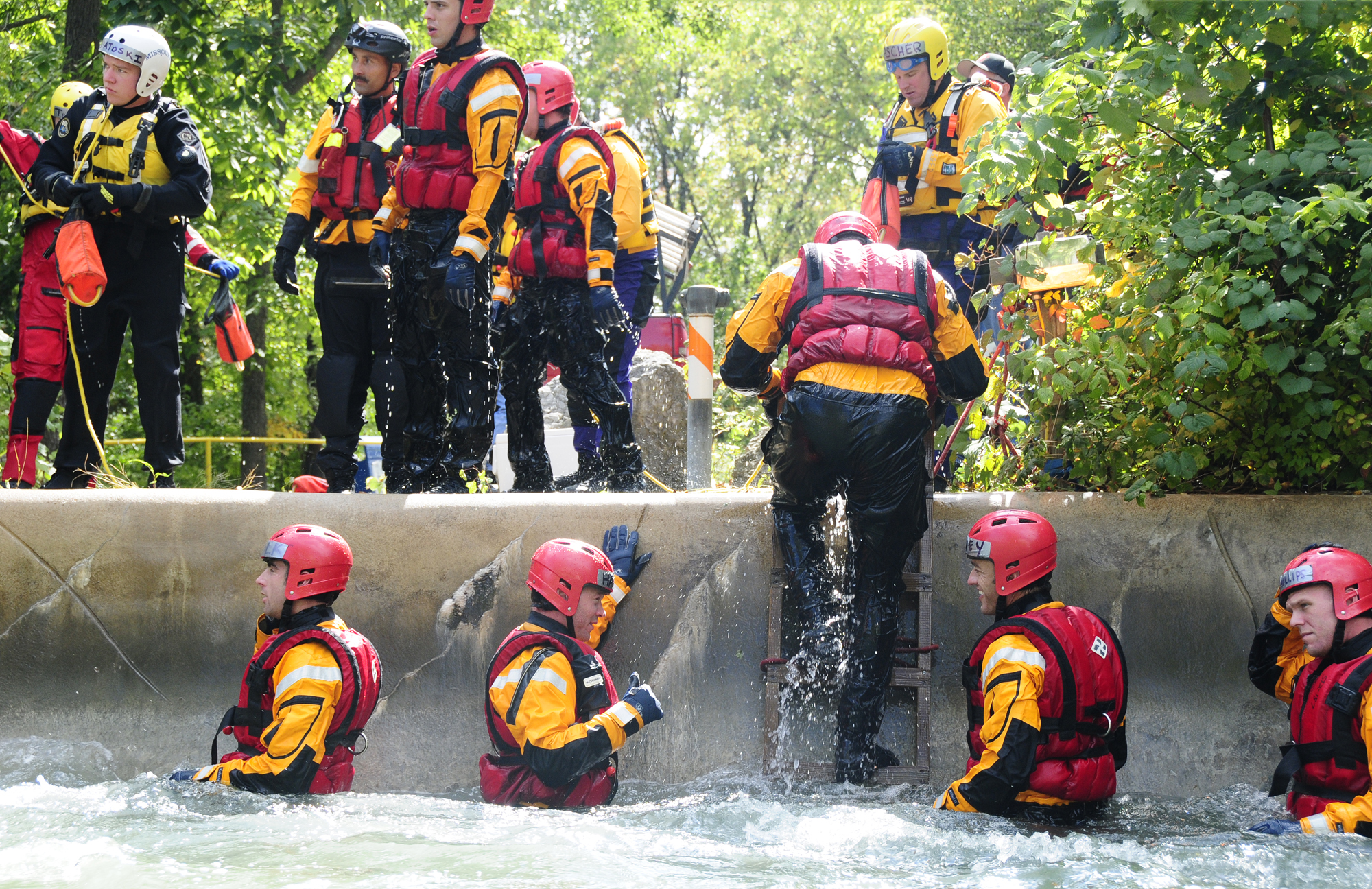 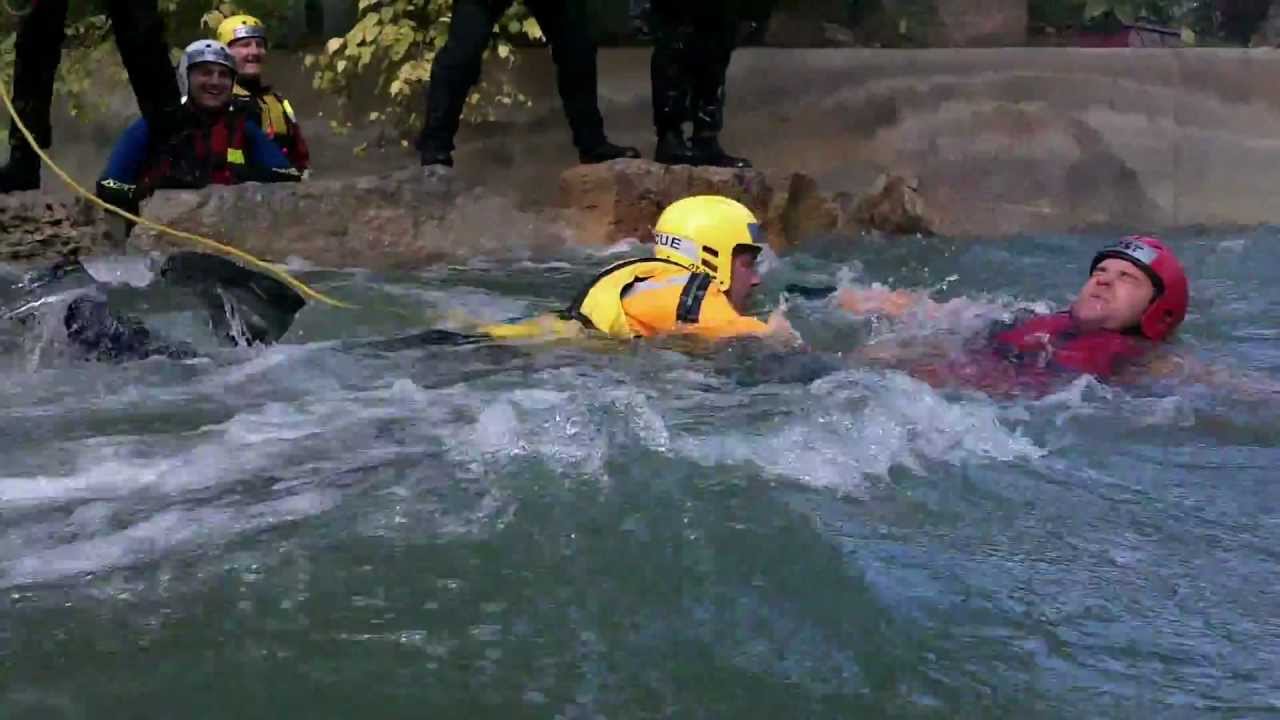 EUREKA, Mo. – Ryan Rascher came through the rapids on Thunder River just in time for a fellow firefighter to jump toward him and bring him to shore.

That’s how the Cape Girardeau firefighter experienced a different side of Six Flags St. Louis.

He came to the amusement park for rescue training designed to prepare him and other emergency personnel for flood scenarios in their own communities.

“I knew it was going to be intense, but you can’t exactly explain something like this until you get in the water and experience it yourself,” Rascher said.

“The natural instinct is to fight the water, stand up and do things that are just going to get you hurt,” he said. “They teach you to focus on your breathing, and above all stay calm and focus on your next obstacle and how you will engage that obstacle.”

For Rascher, those lessons began on Thunder River. The water attraction is the perfect environment for swiftwater rescue training, with conditions mirroring real-life flash flood situations.

“The average motorist thinks they can drive their car through that little creek, and that’s a horrible mistake,” MU FRTI instructor Les Crews said. “We tell motorists, ‘Turn around, don’t drown,’ but we want to make sure our emergency-service responders are prepared for situations where people don’t listen to that advice.”

Crews and others teach firefighters to think through a situation before making a rash decision.

Bill Boller, a captain for Mid-County Fire Protection District of Camdenton, Mo., took the class two years ago. He said it has helped him in responding to flooding and other water-related situations at Lake of the Ozarks.

“Our first thing is not to just jump in the water. We’ll do what we can to not have to get in the water because it’s safer for everybody that way,” Boller said. “This class was the most challenging I’ve ever taken in firefighting, and I became a lot more comfortable in these situations after going through all the things they do teach us.”

Participants practice basic skills like tying and using ropes in rescue situations and learn how to navigate flooded crossings as a team. They also practice “live bait” scenarios, where a rescuer attached to a rope swims to rescue a victim caught in the swift flow of the river. Instructors teach emergency personnel to evaluate every situation, make decisions quickly and create multiple plans that can adapt to changing conditions.

While flooding might not seem as dangerous as other natural disasters, the National Weather Service reported a yearly average of 92 flood-related deaths since 1981. That surpasses the annual average of 56 deaths from tornadoes and 55 from lightning.

“I think a lot of people lull themselves into a false sense of security by saying to themselves, ‘It’s just water and I’m a good swimmer,’ but in fast-moving water they find they have personal limitations,” Crews said.

For firefighters, this preparation is vital.

“When someone dials 911 their issue is for law enforcement or something else, and a lot of times by default the fire service takes care of all the ‘something else,’” Crews said. “This is just another one of the skill sets we have under our rescue umbrella.”

Swiftwater Rescue training teaches emergency response personnel how to use the hydraulic properties of fast-moving water to their advantage.

Students participate in several hands-on learning scenarios, including the "live bait" drill where a rescuer jumps in to secure a victim being swept downriver by swift currents.

Students participate in several hands-on learning scenarios, including the "live bait" drill where a rescuer jumps in to secure a victim being swept downriver by swift currents. Kent Faddis/MU Cooperative Media Group

Rescuers learn how to handle victims adrift in a flooded waterway. Through proper use of rope they can tether themselves to rescuers on shore and retrieve a victim.

Rescuers learn how to handle victims adrift in a flooded waterway. Through proper use of rope they can tether themselves to rescuers on shore and retrieve a victim. Roger Meissen/MU Cooperative Media Group