Fertilizers are essential for sustainable crop production, and worldwide, nearly 40% of the protein consumed by humans is derived from food which had synthetic nitrogen fertilizers applied.

The table below highlights Missouri adoption of several 4R practices between 2003 and 2010 based on data from recent USDA Agricultural Resource Management Surveys.

Impacts of nutrients on water quality

Farmers seek to keep applied fertilizers on the fields so the nutrients are available for crop production. As more applied fertilizers are taken up by crops, less is available to move from the land into the water or air. Fertilizer which is applied to cropland and subsequently enters water can cause various negative impacts. Most generally, fertilizer in water can cause excessive plant and algal growth, called eutrophication. This may result in dissolved oxygen depletion affecting aquatic life, and in the most extreme cases, it may lead to the release of compounds toxic to animals.

Crop nutrients, particularly nitrogen and phosphorus, which leave the field and enter waters may eventually flow into the Mississippi River and enter the Gulf of Mexico. The increase in nutrients in the Gulf of Mexico has created a “dead zone” caused by low oxygen conditions, called hypoxia.

The U.S. Geological Survey monitors water flow and nutrient concentrations within the Mississippi River Basin. The image below shows the direction of the flow-adjusted trend of nitrogen and phosphorus at various locations in the U.S. between 1993 and 2003. Phosphorus concentration in Missouri rivers trended upward or remained constant from 1993 to 2003. On the other hand, nitrogen concentrations in Missouri rivers held constant or trended downward from 1993 to 2003. 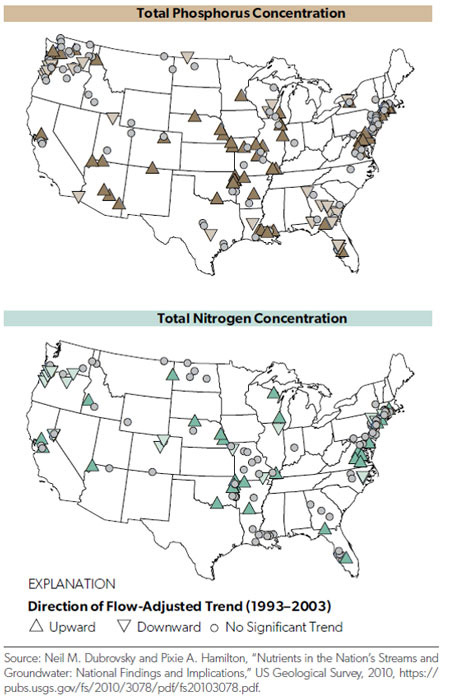 Wheat and Other Small Grains