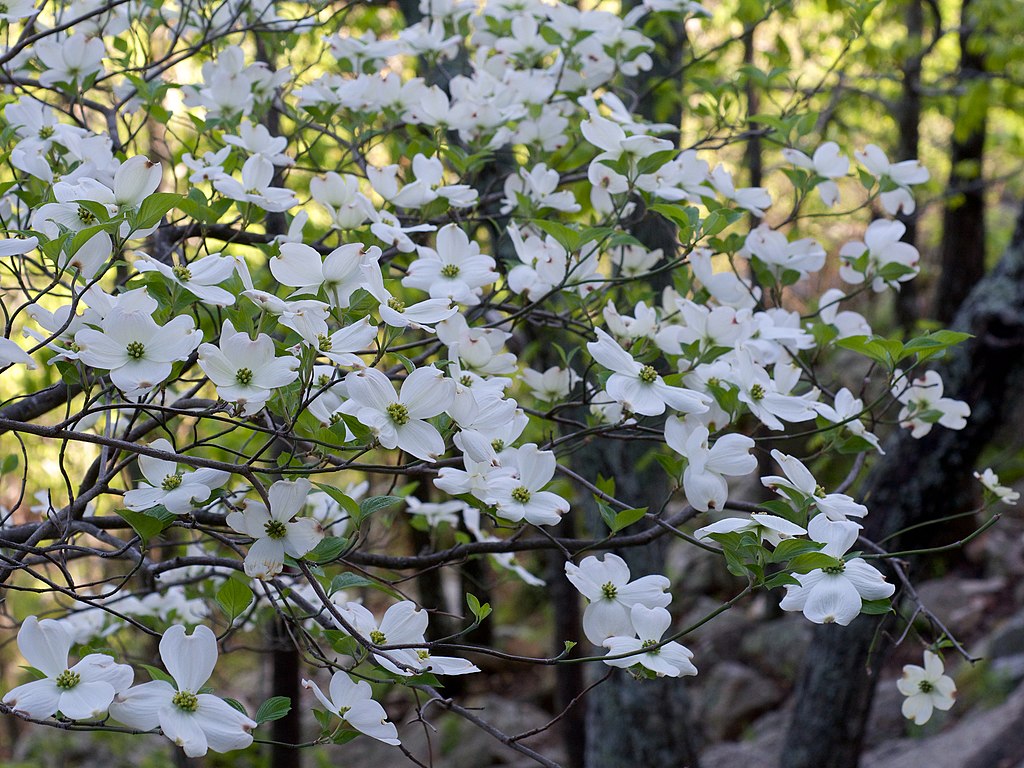 Inconspicuous for most of the year, these diminutive denizens of our forests outdo their towering neighbors with spectacular exhibitions of color before most other species leaf out, Trinklein says.

The name “dogwood” goes back to at least the early 16th century. Some historians believe it was derived from the English “dagwood,” a shortened version of “daggerwood,” referring to the use of the tree’s hard, close-grained wood to make daggers and other weapons in medieval times. Another theory suggests the name comes from the tree’s tannin-rich bark, which was a key ingredient in a remedy for mange in dogs.

Flowering dogwood (Cornus florida) is the state tree of Missouri and the state flower of Virginia and North Carolina. Dogwood’s inconspicuous true flowers are clustered tightly in a tiny yellow bundle in the middle of the four showy, petal-like bracts. The latter are usually white, although there are pink and red cultivars.

Dogwood is adapted to a variety of climates and soils, but they naturally grow in moist, fertile soils high in organic matter. Dogwoods should generally be treated as an understory tree, Trinklein says. It performs best when it receives some shade during the hottest part of the day. With proper care, however, it can grow in full sun. Dogwood can tolerate cold weather but does not grow well where winter temperatures frequently fall below minus 15 F. It cannot endure wet, poorly drained soils.

There are a number of cultivars that tend to provide better flowering and adaptability to home landscapes than native types, but many gardeners still find “volunteer” seedlings to be quite satisfactory.

White-flowered cultivars available from nurseries and garden centers include “Cloud 9,” which blooms early and heavily, and “Cherokee Princess,” which has fairly large flowers. Seedlings of native trees, sold without cultivar names, are also available. They usually are less expensive and more variable in growth and flowering pattern than the named cultivars, Trinklein says.

Trinklein suggests planting dogwoods no deeper than they were grown in the nursery. Place into soil that has been loosened to a depth of 8-12 inches. This area should be two to three times the diameter of the tree’s soil ball or production container. Organic matter such as compost or peat moss can help root growth when mixed with the soil around a new tree. Adding too much organic matter, however, can create a micro-environment that the tree’s roots will not want to leave.

As with any newly planted tree, adequate water during the first two growing seasons is very important for survival. Water thoroughly once or twice a week during dry periods, but avoid overwatering.

Trinklein says many novice gardeners apply too much fertilizer to landscape trees in an attempt to accelerate growth. A newly planted dogwood needs only about ¼ cup of a complete fertilizer fairly high in nitrogen, such as 12-4-8 or 16-4-8. Apply in March and again in July. Evenly broadcast the fertilizer on the soil surface within a 2-foot radius of the trunk, he says.

Dogwood borer is the most common insect pest on established dogwoods. The larvae, which live in the cambial area, can kill branches or even entire trees. Prevent infestation by avoiding damage to the bark when using equipment such as lawn mowers or weed trimmer.

A serious and relatively new threat to flowering dogwoods, especially in the eastern and southeastern U.S., is dogwood anthracnose. Symptoms include medium-large purple-bordered leaf spots and scorched tan blotches that may enlarge to kill the entire leaf. The disease is not a significant problem in the Midwest and should not discourage gardeners from planting dogwoods. Well-tended landscape trees that are not under stress are unlikely to develop dogwood anthracnose. However, gardeners should not bring trees from eastern forests into Missouri.