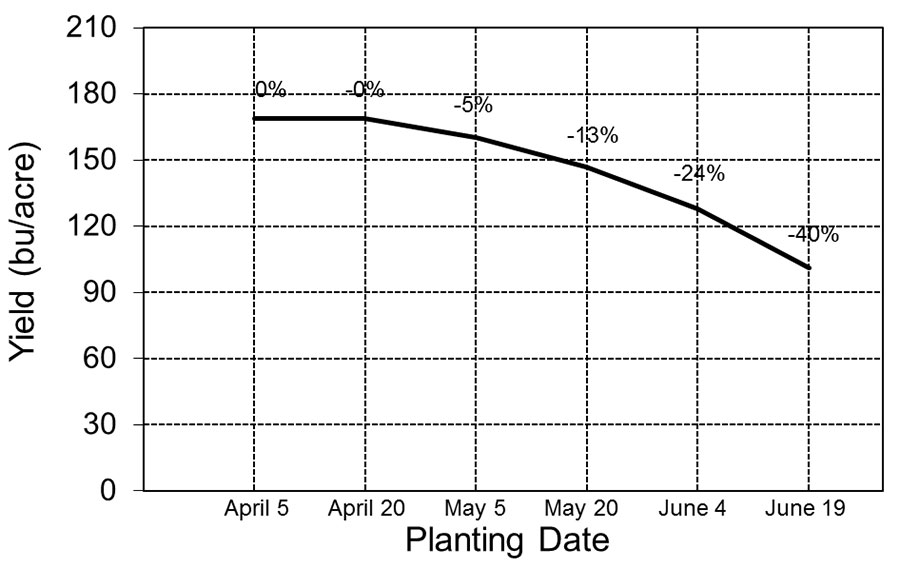 COLUMBIA, Mo. – Once again, wet soils have delayed corn planting throughout Missouri. The USDA’s May 2 Crop Progress and Condition report for the state shows that 27% of intended corn acres is planted – half the five-year average. Southeastern Missouri, the state’s earliest-planted region, has had the greatest delay in corn planting.

Data collected in central Missouri by MU Extension shows the average of five years and multiple hybrids ranges in comparative relative maturity (CRM) from 106 to 116.

Wiebold recalls that agronomists used to talk about an optimum corn planting date. MU data show that, within the scope of its project, a true optimum date does not exist.

Instead, a couple of weeks of unchanging high yield is followed by a decrease in yield with delayed planting. MU’s first planting date was during the last week of March. The decrease in yield begins slowly but accelerates as planting is delayed into late May.

Response of corn yield to planting date differs from year to year. “Weather conditions in late June to early August affect corn yield far more than planting date, and weather during those weeks can mask the effect of planting date,” Wiebold says.

In MU’s study, the decrease in yield from April 20 to May 20 ranged over the years from 5% to more than 25%. “For this reason, it is difficult to predict in any specific year what will happen to corn yield if planting is delayed,” he says. “But average numbers are our best guide for predicting what will happen in 2022.”

If corn planting delays continue, farmers may consider switching to another crop, such as soybean. The costs and benefits of switching to soybean vary among farmers and fields. Farmers must make decisions within their own comfort levels.

However, MU data indicate that switching away from corn may not be appropriate even if corn planting is delayed until the end of May, Wiebold says.

Planting date studies by MU researchers show that delayed planting postpones critical growth stages such as silking and black layer. The week before and two weeks after silk elongation are the most critical in determining corn yield as silks emerge from the husk, pollen grains shed from the tassels and pollen tubes extend through the entire length of the silk to for fertilization and kernel set. Weather conditions, including water availability and heat, can greatly affect kernel set. In central Missouri, delaying corn planting 30 days from late April to late May delays silking about two weeks. Although weather conditions do not vary greatly in July, the potential for dry weather is a little greater for mid-July than early July.

At corn maturity, a dark layer forms in the kernel bottom and grain fill stops. Delaying corn planting 30 days from late April to late May in central Missouri delays black layer formation about three weeks, from early September to the third week of September. Corn yield is safe from freeze damage at black layer. Fortunately, Missouri farmers seldom have to worry about corn yield loss from freeze damage.

The effects of delayed planting on yield relate to the amount of light captured by plants and the average temperature during grain filling. Available monthly growing degree days (GDD) peak in July. In August, available GDD, using normal high and low temperatures, go down 6% in August. The decrease is 41% in September. Monthly sunlight totals also drop from a maximum in July. Total light energy for August and September is 12% and 29% less than for July. Less light and slower kernel development can lower corn yield and delay fall harvest.

“It is stressful to see idle planters and hear the sound of raindrops hitting the house roof,” Wiebold says. “Although the potential for yield loss exists for Missouri’s corn farmers if cornfields cannot be planted soon, MU research offers some assurance that profitable yields are possible even if planting is delayed through May. It is difficult to counsel patience as the calendar days pass by quickly, but, if possible, do not plant into soil that is too wet. Compacted soil will result, and its effects on root growth, soil aeration and water holding capacity may linger long into the growing season and affect yield far more than a few days delay in planting.”