Chemical and pesticide use

The proper use of pesticides has helped crop production become more efficient and sustainable. Herbicide use allows for less tillage. Insecticide use allows crops to yield more per plant and acre. Fungicide use allows grain to be in better condition and maintain its nutritional and processing quality for longer periods of time.

The USDA NASS Agricultural Chemical Use Survey tracks pesticide adoption by crop for key production regions (not exclusive of Missouri). The table below summarizes the share of planted U.S. corn, cotton, rice, soybean and winter wheat acreage which had various treatments in years with the most recent data available.

The USDA data reveals that Missouri is similar to the U.S. Trends over time indicate that Missouri corn and soybean acres that have been treated with herbicides have remained over 90% almost every year since 1990. The image below shows the quantity of pesticides applied for principal crops grown in Missouri.

Chemical applications per acre by crop in Missouri, 1996–2010

Secondary benefits are longer term and more difficult to establish causality. The primary benefit refers to benefits that are immediate and incontrovertible. The image below summarizes the economic, social and environmental benefits of various types of pesticides. 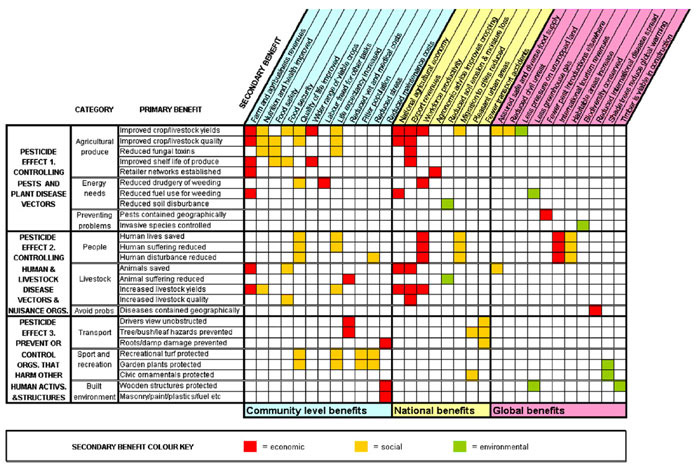 Herbicide use in row-crop production has increased during the past 10 years in Missouri and the rest of the U.S. Corn, soybean and cotton are predominately glyphosate-resistant crops. The Union of Concerned Scientists has blamed the increased use of herbicides on glyphosate-resistant crop production. However, data indicate herbicide applications to rice and wheat, which have no GMO varieties, have also increased. 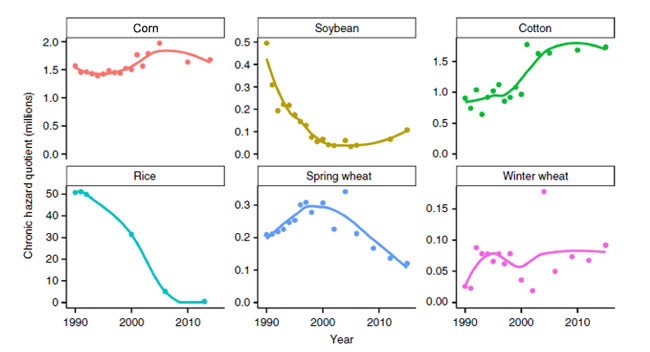 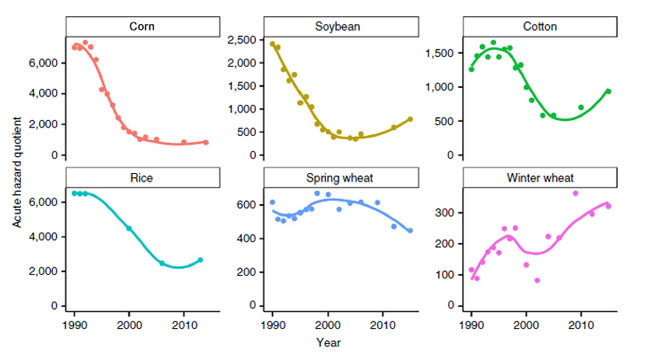 Herbicides benefit farmers by providing better, more reliable weed control at a lower cost than tillage. Better weed control results in higher yields and increased incomes. Herbicide use has also reduced farm-related injuries from hoeing and use of farm equipment.

Apart from the toxicity measure, herbicides also benefit the environment. Replacing cultivation with herbicides has resulted in lower carbon emissions from both less fuel use and greater carbon sequestration, less soil erosion, less soil compaction and less water use.

Concerns with the use of insecticides abound. Contamination of water and soil resources can negatively affect birds, fish and mammals. Agricultural worker and food safety concerns also arise.

The level of testing required to introduce a new insecticide along with the safeguards enforced by state and federal regulatory agencies have mitigated many of these concerns. During the past 30 years, new pesticides have been introduced to be safer to use, have a lower environmental footprint, be more pest-specific and be more precisely applied at extremely low rates.

Crop producers now use integrated pest management (IPM) extensively in row-crop production. Insecticides that had high environmental concerns (e.g. organochlorines) and high toxicity have been, and are continuing to be, replaced by lower risk, biological and user-friendly materials. Insect growth regulators take advantage of pest biology to provide improved management of pests. This improved management reduces losses due to pests and minimizes the effect on nontarget organisms and the environment. Introducing genetically modified crops that confer pest resistance (e.g. Bt corn and cotton) also reduces dependence on chemical controls.

Wheat and Other Small Grains