Building a network to support next-generation manufacturing in Missouri 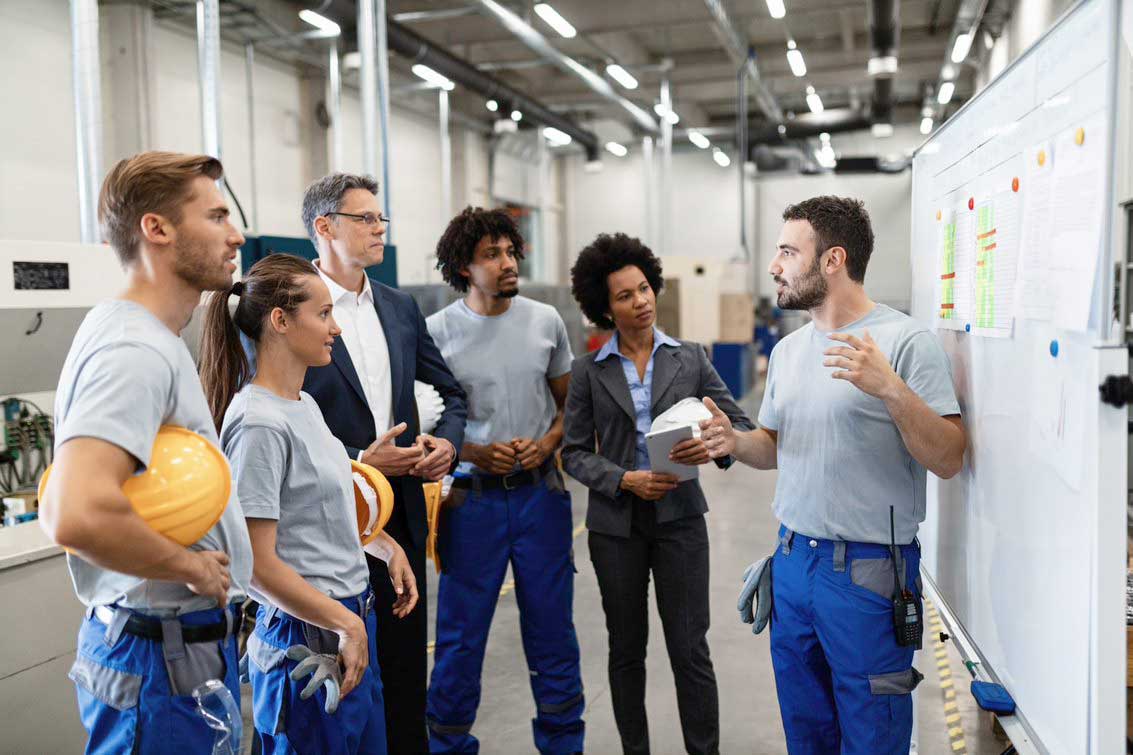 Missouri manufacturers, chambers of commerce and business and economic development organizations will team up with University of Missouri System researchers over the next 18 months in a series of roundtable events across the state aimed at strengthening Missouri’s manufacturing sector. The first roundtable was held on May 25 with several manufacturers from northeastern Missouri.

The Consortium to Enhance Innovation, Resilience and Agility in Missouri Manufacturers aims to create networks and partnerships to support manufacturers’ needs for long-term planning, success and growth. The initiative is funded by a $608,000 grant from the U.S. Department of Commerce’s Economic Development Administration (EDA) through Coronavirus Aid, Relief, and Economic Security (CARES) Act funds, along with a $154,000 match from the Missouri Department of Economic Development.

“This EDA investment will accelerate state efforts to foster effective connections and collaboration between UM System researchers and Missouri manufacturers,” said Steve Devlin, Consortium project leader and director of MU Extension’s Business and Community program. “This timely support gives manufacturers and researchers a direct line to each other so together they work to enhance Missouri manufacturers’ competitiveness and their resilience to withstand future economic disruptions.”

The Consortium is one component supporting the broad mission of the Missouri Manufacturing Policy Academy, which Gov. Mike Parson convened in 2019. Its goal is to bring together entrepreneurs, innovators, manufacturers and researchers and faculty from postsecondary institutions across the state to create a roadmap for growing manufacturing in Missouri, said Marshall Stewart, University of Missouri vice chancellor for extension and engagement, who serves on the Policy Academy’s leadership team.

“We are excited by this opportunity to partner with local manufacturers across Missouri to apply next-generation research, resources and expertise to solve real challenges and needs,” Stewart said.

“The Economic Development Administration is proud to support the Consortium to Enhance Innovation, Resilience, and Agility in Missouri’s Manufacturers,” said Angela Belden Martinez, director of EDA’s Denver Regional Office. “This project will strengthen the manufacturing industry in the state, creating workforce development programs and new opportunities for businesses to grow. We congratulate you on your vision and your dedication to this project.”

Devlin anticipates convening 10 to 20 roundtable meetings every six to eight weeks around the state over the next 18 months to help companies realize economic impacts in areas such as improving technology, increasing sales, reducing costs, expanding markets, creating and retaining jobs, attracting additional investments and introduction of new products.

“Most small manufacturers are focused on current production and, given that priority, they are often challenged to find the time to look over the horizon on their own,” Devlin said. “Our intent is not to duplicate any existing efforts to bolster Missouri manufacturing. Instead, we want to complement existing efforts to ensure that Missouri’s manufacturers have clear and facilitated access to UM System resources.”

The Consortium’s regional roundtables will bring key nonprofits like Missouri Enterprise, research institutions, and community and technical colleges together with manufacturers to share resources and help work through longer-range plans. “We’ll also explore whether the roundtable format is a useful way to support manufacturing going forward,” Devlin said.

Engineering and business development faculty at the UM System’s four universities will work with company CEOs, plant managers and engineers, sharing educational materials and resources about new technologies and next-generation planning and capacity-building. The team also hopes to identify several applied engineering projects that university researchers and manufacturer can develop together, such as automation, ergonomics and artificial intelligence

Of the nearly 6,000 manufacturers in Missouri, 5,462 have 50 or fewer employees, and nearly a third are located in rural areas. Unlike manufacturing giants in major urban centers, small and rural manufacturers typically lack easy access to university resources for product testing, research and development and faculty/student projects that could benefit their company.

“We can’t afford to allow our manufacturing enterprise to lag behind,” Devlin said. “By supporting and encouraging growth in this sector, we are strengthening and helping boost Missouri’s overall economic health.”

The Consortium’s roundtable format can build networks that fuel innovation and capacity within a region, said Carolyn Chrisman, executive director of K-REDI, an economic development organization in Kirksville that works to promote economic growth through business recruitment and business expansion.

“In a small community like Kirksville, our manufacturers share many of the same issues and challenges, but they see themselves as competitors for workers, competitors on what they pay, and on their benefit packages,” said Chrisman, who is also director of Kirksville’s Small Business Development Center and executive director of the Missouri Rural Enterprise and Innovation Center. “They are also spread out across the region and seldom cross paths. Maybe their human resources directors talk to each other, but that’s about it.”

Chrisman said the Consortium can shift the conversation to “Who are the experts in the university system? What can we get out of the research realm and into actual practice? Who and what resources are there within our state that will help solve problems, train skilled workers, hire more people, expand production? This is the hope and possibility of this roundtable effort, that it’s going to allow that food processor in Kirksville and that food processor in Hannibal to visit and have more cohesion in looking at these bigger issues that affect them both.”

This roundtable effort recognizes that these smaller manufacturers can have an outsized impact on the overall economic health of smaller, rural communities, said Kevin Truman, dean of UMKC’s School of Computing and Engineering and a member of the core Consortium grant team.

“The hope is that we will cultivate awareness and give access to small manufacturers about the possibilities and resources that exist,” Truman said. One such resource is UMKC’s Robert W. Plaster Free Enterprise and Research Center, a “next-generation space” where entrepreneurs can develop digital and 3D-printer prototypes of their ideas and test small-scale product batches using the latest manufacturing technologies. “This can be a lab for the ideas incubated in our roundtables,” he said.

The manufacturing sector adds significant value to an economy by transforming lower-cost materials into higher-value end products for sale and export. “It is a segment we definitely want to grow,” Truman said. “And it becomes even more attractive as manufacturing moves away from the stereotypically grim plants of the past to the advanced high-tech operations of the future that need skilled labor and the programs that will train and prepare workers for those jobs. We need to get some level of manufacturing back to the United States to keep our supply chains healthy and moving. We can’t be dependent on other countries for the products we need for our day to day that affects our economy,” such as the recent disruption due to a shortage of microchip production and shipment.

Truman said the U.S. needs to get into light manufacturing, investing in things like chip design and chip manufacturers or technology for the pharmaceutical industry. “These are not huge markets, but they are necessary markets,” he said.

“I think most Americans would agree that manufacturing is the backbone of the economy,” Chrisman said. “For a segment of our population, those positions are a way into a middle-class lifestyle. As you get into smaller communities, job options become even less; so keeping high-paying and advanced manufacturing jobs in your community and attracting new ones is extremely important.”

The Consortium seeks to create opportunities across Missouri for manufacturing professionals to learn from others and to share ideas and information, Devlin said. “It’s a commitment from our land-grant institution to be that connector between the manufacturers to identify and solve problems and grow Missouri manufacturing and our state’s economy.”