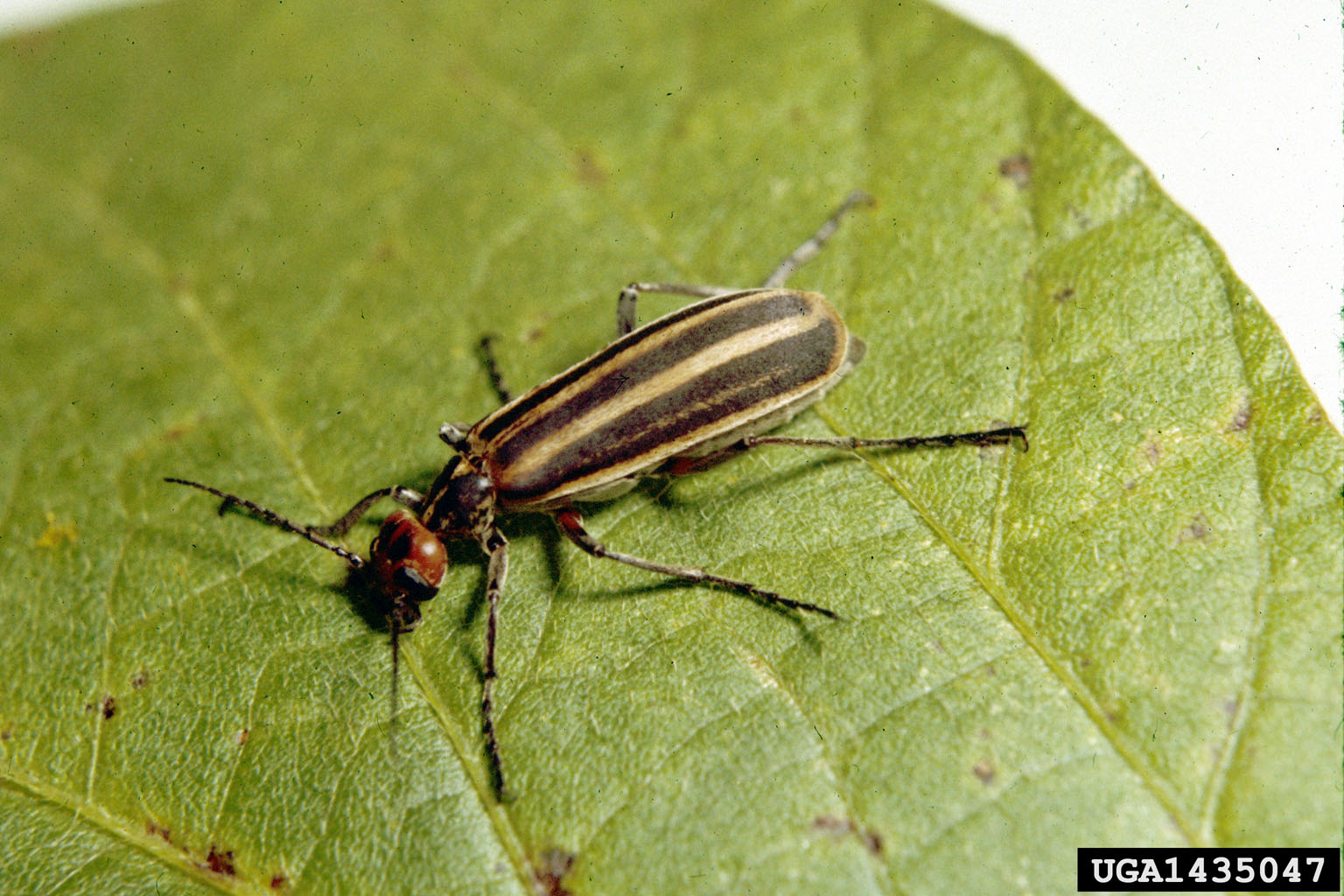 The toxin, called cantharidin, can cause animals to become sick and even die. Cantharidin is a stable toxin, so even the dried remains of beetles in hay remain poisonous to livestock.

There are a number of species of blister beetles, Miller says. Some common ones are the striped, black, gray and margined. Striped blister beetles cause the most damage to livestock, especially horses, because of their habit of aggregating in huge numbers in alfalfa, which can result in many dead beetles in bales of hay.

Striped blister beetles range from 0.5 inch to 1 inch long and have narrow, cylindrical soft dark bodies marked by orange stripes on their backs. They are an infrequent pest in alfalfa and cause limited plant damage in alfalfa and soybean. Few blister beetles appear in the first cutting of alfalfa in Missouri, says Miller. They appear in alfalfa harvested in June, July or August.

The beetles are hard to detect in standing alfalfa, blending in with the foliage, Miller says. “I’ve walked through swarms while taking insect sweeps and never noticed them until I found them in the sweep net.”

Other species are found individually or in small, low-density clusters in alfalfa, soybeans, vegetables, ornamentals, weeds (such as those in the pigweed family) and other plants. Therefore, these are usually not the problem in bales of hay.

Blister beetle larvae feed on grasshopper eggs in late summer. They overwinter in the soil, pupate the following spring and, depending upon the species, emerge in June, July or August. Adults then feed, mate and lay eggs for the next generation.

Horses are most susceptible to the toxin produced by blister beetles. They absorb and excrete it through their kidneys, which causes serious damage to the stomach lining, small intestine, kidney, ureter, urinary tract and urethra. The reaction depends on the number of beetles consumed.

In most estimates, horses must consume at least 30-50 striped blister beetles to be poisoned. However, as few as two to five blister beetles may cause colic in horses, says Miller. Dried body fluids from crushed beetles on the hay may cause other issues as well.

Blister beetle poisoning symptoms vary but usually include ulcerations of the mouth, frequent attempts to urinate, jerking contractions of the diaphragm, colic, diarrhea, discarded intestinal tract lining in the stool, reduced levels of calcium and magnesium in the blood, pawing and frequent play with lips and tongue in water. Miller recommends contacting a veterinarian immediately when these symptoms show. Also, inspect the forage eaten by the animal for blister beetles.

Beef cattle and sheep are less susceptible to cantharidin poisoning but may experience symptoms if they eat large numbers of the beetles. Little is known of the effects on dairy cows.

Miller recommends these options to reduce the chance of poisoning:

• Use first cutting alfalfa as feed for horses.

• Avoid using hay conditioners or crimpers. Use a self-propelled harvester with wide-set wheels instead to windrow alfalfa as it is cut. Hay conditioners and crimpers tend to kill beetles when cutting instead of allowing live beetles to move out of the alfalfa as it dries.

• Apply an insecticide for control. Scout fields eight or nine days before harvest, concentrating on the edge of fields. Scout treated and untreated fields one day prior to harvest to ensure that beetles have not reinfested fields after insecticide application.

• Check hay for blister beetles at time of feeding. They retain their size and shape when dead. Removing beetles from forages alone will not prevent poisoning as hay can still absorb the beetles’ cantharidin.

Miller also notes that these common suggestions may NOT help:

• Mowing alfalfa before flowering. The striped blister beetle species is just as likely to feed on nonflowering alfalfa as flowering.

• Using a sickle bar mower. This results in driving over the newly cut swath. Beetles may then be crushed and killed in the swath by the tractor tires.