Be smart about fall N

It's October 26 and there is snow falling outside my window in Columbia. The precip over the past week may have slowed down fall field operations a little, but we're at or ahead of average on corn and soybean harvest according to USDA—unlike the past two years. This probably carries over to other field operations as well.

I hope that none of you have applied anhydrous yet for next year's corn. In my opinion, October is too risky—even if it's snowing.

We are just now getting to where soil temperatures at 6 inches average around 50° across the whole state. This is often used as a guideline for when to apply anhydrous. The most dangerous thing about this guideline is that some people interpret it to mean that it's "safe" to apply anhydrous once soil temperature falls to 50. That's way too simple. Waiting until after 50 reduces the risk, but not by a lot. The later you wait, the lower the risk than the N will be lost before the corn needs it. Here's my gut feeling about risk level (1 to 10 scale where 10 is high risk):

The truth is that ammonia still converts to nitrate (vulnerable to loss) at 50 degrees. It's slow, but it goes.  Once the ground is frozen, it stops—but we have a lot of years where it never freezes at anhydrous depth.

But—the later you wait, the higher the risk of not having enough time to get all field operations done when they should be. That risk is different for every farm and every farmer. It is also higher than it was 50 years ago—we have more wet days when you can't get in the field than we used to.

So it's a balancing act. The longer you wait, the less risk of losing the N before your corn needs it, but the greater the risk of running short of field time.

Here are my three take-home messages about fall N for corn—I'll go into more detail on each. Tailor them for your operation.

Pencil in 8 bushel loss if weather is average

This is based on a three-year study covering about 50 farm fields that got fall anhydrous. In the year with average November-March precip, we were able to increase yield an average of 8 bushels by adding some sidedress N. This showed that N loss was holding the crop back a little. If you're willing to lose some yield to improve logistics, I'm okay with that.

Adding extra N in the fall could make up some or all of this yield gap in an average-rainfall year, but would be wasted money in a dry year and would not provide nearly enough N in a wet year with high N loss. It's not clear to me that you can come out ahead that way. There is a much wider range of possible outcomes—more uncertainty—with anhydrous applied in the fall than applied in the spring.

In the other two years of this study, November-March precip was less than half of the long-term average. In these years, April soil samples showed that the anhydrous was essentially all there. And sidedress N only increased yield in a couple of fields that got excessive rain in May. The November-March precip may cause leaching loss directly, but also sets up soil moisture conditions that will cause loss with typical April-June rainfall.

Both warm and wet conditions contribute to N loss. Eventually it always gets warm, so wet is more important.

Fall anhydrous application can be a risk worth taking, but only if you do what your crop needs when N is lost. 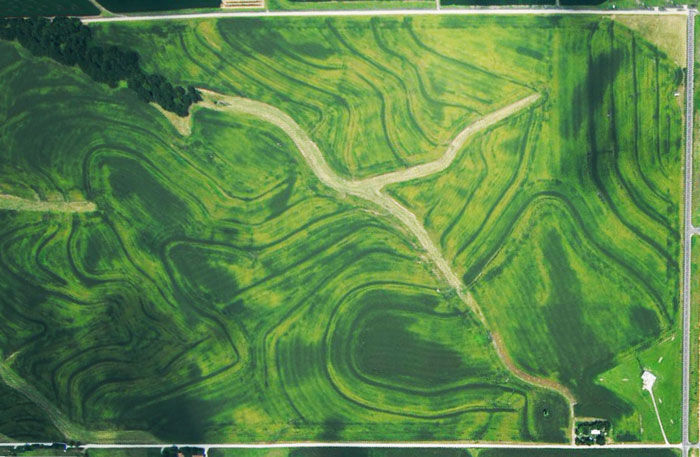 Field-average yield was 45 bushels below yields in the dark green areas in this field that received anhydrous around Thanksgiving. Excess February-June rain was the reason. Coming back with more N would have helped.

Here's an example of what can happen. This field received a full rate of anhydrous ammonia around Thanksgiving. Soil temperatures were below 50° and were fairly normal through the winter. Early-winter precip was normal, but it started getting wetter in February and continued through June. This image was taken in August. When yields came in from the combine, field-average yield was 45 bushels below the yield in the dark-green areas. This field is well-drained, so the excess rain did not hurt the corn directly—it hurt it by taking away its nitrogen.

Will more N help? I've done on-farm tests in four states and six years where there had been excess spring rain. Yield response to extra N was highly profitable except in one state in one year. And the worse the corn looks, the more it responds. I imagine that there is corn that is so damaged that replacing lost N doesn't make sense, but I haven't seen it personally.

How do you know whether you've lost your N? This is where it gets tricky. I believe that looking at the crop is the most reliable indicator, but there's no time to walk all your fields. Images work best. Planet Labs will let you have a free 2-week trial to look at their satellite images, which they acquire almost daily for most fields. There are also computer models that will give you decent information, but you probably don't have time to sign them up by the time you think you might have a problem.

Either way, you're not putting all your eggs in one basket. You're limiting your risk as far as N that is lost. But if you put a full rate on a limited number of fields, and have weather that doesn't cause any loss, you don't have to go back. That's where you gain a logistical advantage.

You may also gain a logistical advantage by having a service provider be the one who comes back to finish your N program after you've put on 2/3 of it as fall anhydrous. But as long as you're paying them to run the field, why not a higher rate? Why not put it all on then? You pay less for N by putting it on in the fall, but average loss for fall N probably eats away most or all of your price differential. And it adds uncertainty. Did you lose N, or didn't you? This is a much harder question to answer when you put your N down on November 2 than when you put it down on June 2.

Want to see more articles like this one? Subscribe to the Integrated Pest and Crop Management (IPCM) newsletter.