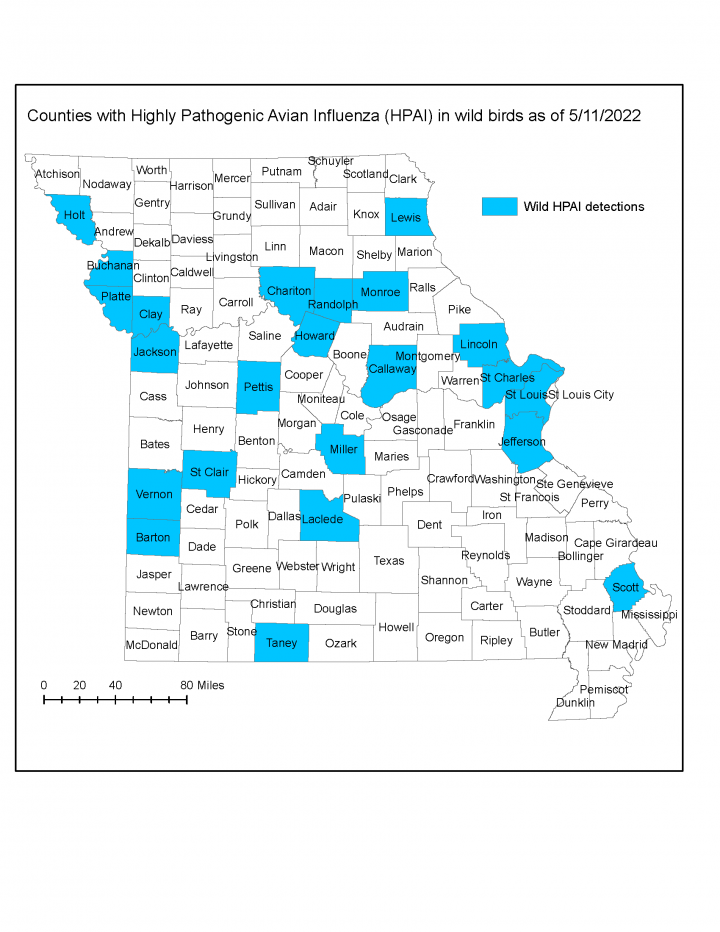 Fewer reports of dead and sick birds point to an end to the current outbreak of avian influenza, Pierce says. Rising summer temperatures also will likely lead to a decrease in avian influenza.

“The good news is that there is evidence that the AI virus does not tolerate high temperatures well, so we should not see problems during the summer,” says Pierce. Numbers could tick upward again in the fall as temperatures drop.

Pierce says it is not necessary to remove bird feeders as a precaution; transmission of avian influenza from birds to humans is very rare. However, it is important to practice good sanitary measures such as regularly cleaning birdbaths and bird feeders.

Pierce also notes that songbirds do not appear to be a major carrier of avian influenza. (For more information, he suggests Avian Influenza Outbreak: Should You Take Down Your Bird Feeders? from the Cornell Lab of Ornithology.)

The flu occurs naturally in bird populations, especially waterfowl, shorebirds and domestic birds such as chickens and turkeys. According to MDC, avian influenza spreads as birds along North American flyways mingle with infected birds from Europe and Asia.

The virus moves from bird to bird through fecal droppings, saliva and nasal discharges. There is a risk for spillover from wild birds into domestic poultry and then back again from poultry to wild birds, resulting in further spread. While often fatal in domestic poultry, it rarely infects other domestic animals or humans.

Infected birds exhibit symptoms such as tremors, head tilting, lethargy, loss of coordination, inability to fly or walk properly and trouble standing upright, according to MDC.

You can report dead or sick birds to MDC at [email protected]. The MU Veterinary Medical Diagnostic Lab accepts samples for testing. Visit vmdl.missouri.edu for details.

The Missouri Department of Agriculture has information and updates on avian influenza at agriculture.mo.gov/avian-influenza.php.

https://mdc.mo.gov/sites/default/files/styles/media_large/public/2022-05/HPAI%20map_WILD%20ONLY_5-11-2022.png
Missouri Department of Conservation map shows the 23 Missouri counties with confirmed cases of avian flu as of May 11. Reported cases are dropping as temperatures rise. Source: https://mdc.mo.gov/wildlife/wildlife-diseases/highly-pathogenic-avian-influenza-hpai.

Missouri Department of Conservation map shows the 23 Missouri counties with confirmed cases of avian flu as of May 11. Reported cases are dropping as temperatures rise. Source: https://mdc.mo.gov/wildlife/wildlife-diseases/highly-pathogenic-avian-influenz

Missouri Department of Conservation map shows the 23 Missouri counties with confirmed cases of avian flu as of May 11. Reported cases are dropping as temperatures rise. Source: https://mdc.mo.gov/wildlife/wildlife-diseases/highly-pathogenic-avian-influenz