Conducting a bobwhite quail habitat appraisal of the MU BREC served to identify several significant limiting factors that needed to be addressed. The essential habitat components of nesting, brood-rearing and escape cover were scarce, particularly in the more intensively cropped portions of the property. Consequently, establishing field borders and managing field edges for brood-rearing and escape cover, or establishing covey headquarters, was emphasized. The fields that were dominated by tall fescue and rank stands of warm-season grasses lacked brood-rearing cover and food sources, making these areas unsuitable for bobwhites. These dense grasses had prevented the establishment of native forbs and legumes, and they inhibited the movement of quail chicks and foraging adult birds.

As described earlier, bobwhites require a habitat that is composed of a mix of early successional stages of vegetation that include a diverse annual plant community (native forbs and legumes), native warm-season grasses and shrubby, woody cover. Thus, the management objective was to document the habitat components that were missing or in short supply within each of the conceptual home ranges identified on the property and implement the appropriate management practice that would create and maintain these essential plant communities.

Bobwhite quail populations naturally fluctuate from year to year. Important factors that impact a population include the severity of the winter and spring weather; the availability of good nesting, brood-rearing and escape cover; and the available food resources. If appropriate habitats are prevalent across the landscape and the weather is not extreme, bobwhite numbers can increase dramatically.

Based on past bird surveys conducted during the winter months, an estimated two coveys of bobwhite quail were on the property before habitat management practices were implemented in 2005. Although the number of bobwhite quail coveys has fluctuated on the property for the past several years, the population has generally increased as a result of favorable conditions and the implementation of habitat management practices. After habitat management practices were implemented, covey call counts were conducted during the fall using techniques described in MU Extension publication G9433, Methods for Counting Quail on Your Property. Figure 32 depicts on an aerial photo the locations of the listening points for the fall covey call counts. These covey call counts have revealed a significant increase in the number of coveys on the farm. Table 4 summarizes the covey call counts conducted on the property from 2008 to 2011. Note that covey numbers were highest in 2008 and 2009 and significantly lower in 2010. This fluctuation may have been due to the extremely poor weather conditions during the winter and spring of that year, which negatively impacted nest success and brood survival.

The bobwhite quail is not the only wildlife species that has benefitted from these management practices. Research has shown that more than 100 species benefit from the creation and management of early successional plant communities in Missouri. Surveys conducted by the Missouri Audubon Society have documented more than 150 avian species (migratory as well as resident birds) using habitats provided at the MU BREC. 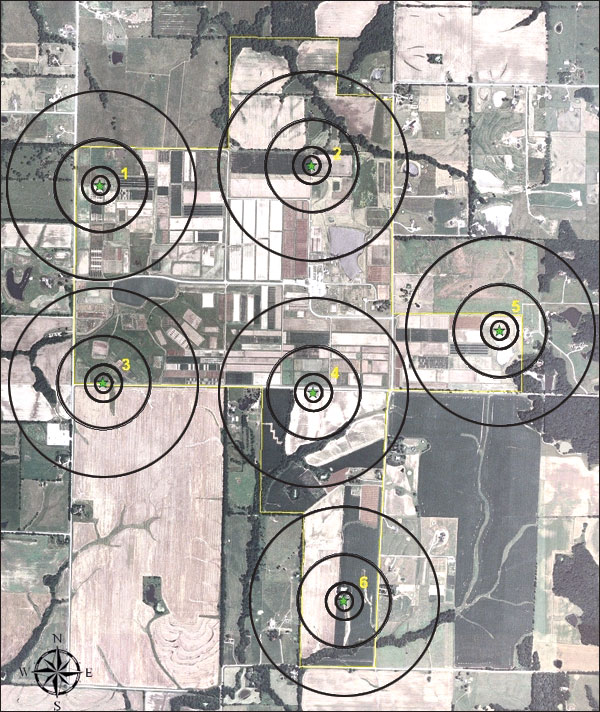