Land-use changes and the impacts on wildlife

Wildlife populations in Missouri are dependent on the management decisions of private landowners, as about 93 percent of the land base is privately owned. A diversity of wildlife species that require early successional vegetation (for example, warm-season grasses, shrubs, annual weeds and legumes, also known as “forbs”) was once an accidental by-product of land management and benefitted from farming practices that provided a diversity of plant communities on agricultural lands. During the past several decades, changes in land use have resulted in a loss of habitat for many wildlife species that are dependent on these plant communities for food and cover. These changes have negatively impacted populations of bobwhite quail, cottontail rabbits and numerous grassland bird species — including dickcissels, Eastern meadowlarks, and grasshopper and Henslow’s sparrows — that need a diversity of native grasses, annual weeds and legumes, and shrubby cover for nesting, brood rearing, food and protection (Figure 1).

In Missouri, populations of many of these species have been declining for the past 30 to 40 years. For example, Figure 2 depicts long-term bobwhite quail population trend data that has been collected during the Missouri Department of Conservation’s annual roadside survey since 1983. This information provides a snapshot view of bobwhite numbers throughout the state and is largely reflective of conditions on private lands. Suitable bobwhite habitat continues to decrease statewide as competing land uses, such as urban growth and loss of small farms, change the landscape to the detriment of the species. The following factors have contributed to this habitat loss within the agricultural ecosystem (Figure 3):

Many Missouri landowners are interested in implement­ing soil conservation and habitat management practices that benefit wildlife, particularly when these can complement their agricultural production objectives. However, implementation of these practices can be limited by conflicts between economic and conservation objectives and by the voluntary nature of participating in state and federal agricultural programs that provide cost-share incentives for conducting conservation practices. Proper planning is key to successful integration of wildlife, soil conservation and agronomic goals on your property. 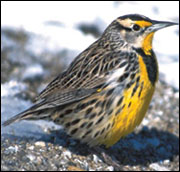 Figure 1. Changes in land use in Missouri have diminished the habitat of these and other wildlife species: (left to right, top to bottom) dickcissels, meadowlarks, bobwhite quail and cottontail rabbits. 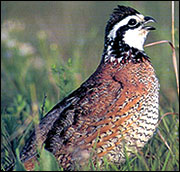 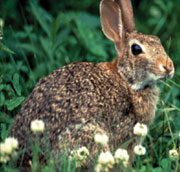 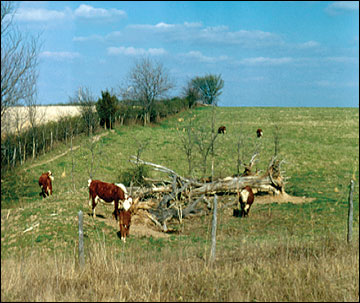 Figure 3. A variety of land-use practices have contributed to the decline in the overall quality of wildlife habitat within the agroecosystem. These practices include (top to bottom) overgrazing and monocultures of tall fescue; large field sizes with a lack of plant diversity around field edges; and advanced plant succession in areas that once consisted of low-growing shrubs and thickets. 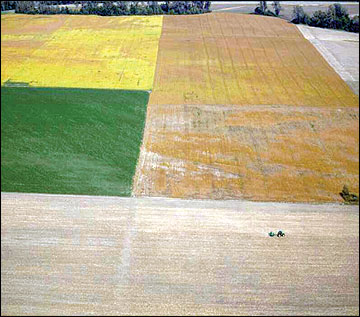 Managing wildlife habitat on your property

Wildlife species require four basic habitat components for survival: food, cover, water and space. The geographic distribution and abundance of a particular species depends on many factors, including the species’ physical limitations and the environmental conditions. Habitats are influenced by the composition and structure of the vegetation, which provides food, cover and places for wildlife to breed and raise young, within the area.

The habitat needs of a species often change throughout its life history, which includes key events and strategies that have been adapted for survival, such as mate selection, nesting, brood rearing, food selection and migration. In addition, the biological processes that govern a species’ life history vary through the year, as depicted in the example for bobwhite quail in Figure 4. The availability and abundance of food and cover that wildlife require vary during each season. Examples of habitat types that provide areas for nesting, brood-rearing and escape cover for bobwhite quail are shown in Figure 5.

Wildlife populations generally respond to management practices conducted to enhance their habitat. The quality and arrangement of the four basic habitat components also influence the survival and productivity of wildlife, as higher-quality habitats generally have the potential to support a higher density of animals. Wildlife management practices are more likely to succeed when landowners develop

Once you decide what wildlife species you want to attract, learn about their biology and their habitat needs.

Next, assess the existing conditions of your property and determine which of the basic habitat components — food, cover, water and space — are in short supply or in need of improvement. This is an extremely important step whether you are interested in managing for species such as white-tailed deer, wild turkey, waterfowl, bluebirds or bobwhite quail, or for a diversity of wildlife. These “limiting factors” will need to be addressed through the implementation of management practices.

Finally, develop a wildlife management plan that identifies your overall wildlife goals and specific objectives for implementing the management practices that need to be conducted. Professional experience can be helpful when developing a plan and is available from wildlife biologists certified by The Wildlife Society and from private lands conservationists with the Missouri Department of Conservation. 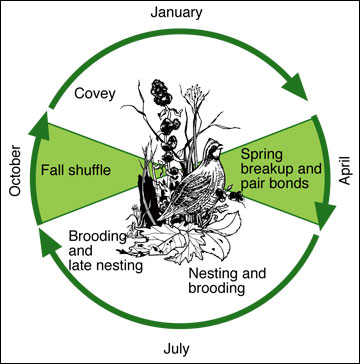 Figure 4. Annual cycle and major events in the life history of bobwhite quail. 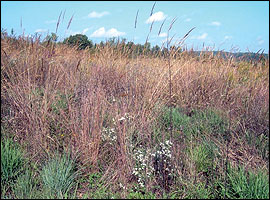 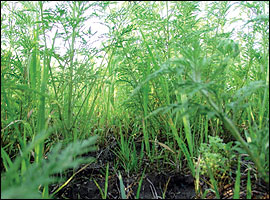 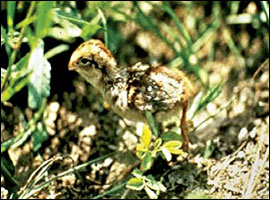 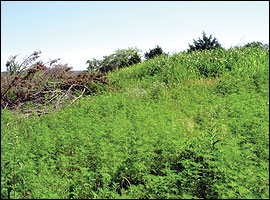 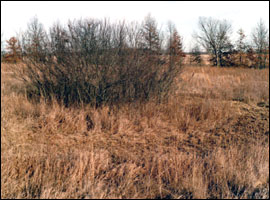 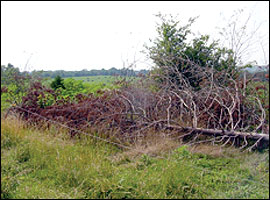 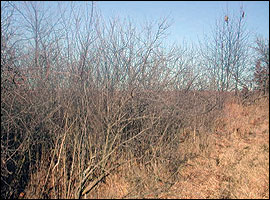 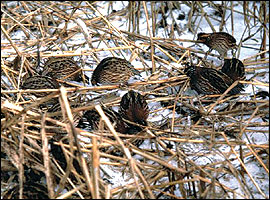 All wildlife species have adapted features that allow them to exploit unique parts of an environment and plant community. Each species acquires energetic and nutritional resources by foraging on specific foods that are available in a particular successional stage of one or more plant communities.

Plant communities do not remain static but rather change over time. The orderly process that describes the change from one plant community to another is called “ecological succession.” As a plant community’s composition and structure change, so do the food and cover resources it provides. Therefore, the wildlife community that a tract of land supports changes as ecological succession proceeds to a mature stage (Figure 6). Wildlife management success is achieved by manipulating the natural processes that determine the type of plant community that exists in an area. Soon after a disturbance, annual weeds and forbs will be replaced by perennial grasses and shrubs in just a few years, particularly with the abundant rainfall patterns in most of Missouri. Without disturbance, litter will begin to accumulate and the amount of bare ground will decrease as succession advances. Perennial cool-season and warm-season grasses will dominate the site, and the density of the vegetation will increase. At this point, the rank vegetation growth will not allow forbs and legumes to persist in the stand, decreasing the amount of important foods, such as seeds and insects, available. As plant succession advances, the ability of the plant community to provide specific wildlife habitat requirements also changes.

One important objective for managing habitats is to create the specific type of plant community that provides the energetic, nutritional and cover requirements of wildlife throughout the year. Landowners can affect the plant community or successional stage by manipulating the frequency, timing and intensity of disturbances.

Practices such as planting shrubs, fertilizing a food plot or flooding a crop field will increase the rate of plant succession. Practices such as prescribed fires, disking, mowing, herbicide applications, timber stand improvements and tree harvests will set back plant succession. Effective wildlife management depends on recognizing the successional stages to which a species has adapted and conducting appropriate habitat management practices to create and maintain those specific plant communities throughout the year.

Specific activities need to be conducted as part of the planning process:

The following case study describes the process used to create and manage early successional plant communities at the MU Bradford Research Center (MU BREC) for wildlife, agronomic and economic benefits. It showcases a three-phase process landowners can use to make informed habitat-management decisions on their properties to achieve their wildlife goals.

Integrating wildlife and agronomic goals on the farm

The MU BREC, http://aes.missouri.edu/Bradford, is one of 12 MU Agricultural Experiment Stations of the University Missouri and is located 15 miles east of Columbia. The center encompasses almost 800 acres and traditionally has supported agronomic research and extension programs. In recent years, the center has also become a venue for conducting natural resource and wildlife extension programs. Management practices have been implemented to demonstrate techniques that can be used for improving soil conservation and enhancing habitats for a variety of wildlife, including bobwhite quail, that require early successional vegetation. These practices were established to complement the crop production and conservation objectives in a sustainable and economic manner. Wildlife management practices were established to accomplish three broad educational goals:

Phase 1. Evaluate the existing habitat conditions on the farm.

Phase 3. Evaluate the success and response of the implemented management practices.