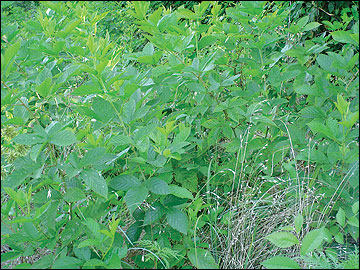 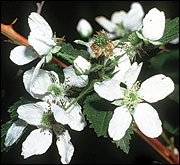 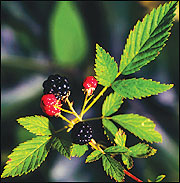 Primary canes of most blackberry species exhibit leaves with five leaflets, while flower canes (here) have three leaflets. Fruits ripen to a deep purple or black and provide quail a source of both food and water.

Briars are erect shrubs growing to 2 feet tall in hard, dry pastures or occasionally branching to 8 feet in close colonies on better soils. The twigs and trunks are ribbed with numerous straight or recurved prickles. Flowers are white, blooming from April to June. The large, sweet fruits mature from June to August.

Briars provide food for many species of small mammals and birds, including bobwhites. Adults and chicks eat the fruit and insects that occur on the fruit. Large brambles provide summer loafing cover and year-round escape cover. Quail nests are often found in grass clumps under brambles. Habitat managers should avoid planting Himalaya blackberry, an exotic species that grows quickly in dense colonies and can quickly take over a pasture, reducing the amount of usable space for bobwhites.