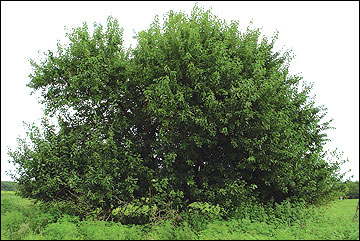 Open grown Osage orange trees often have drooping branches that afford cover to bobwhites, but trees cut and laid over place more dense cover on the ground where quail need it. Consider cutting such trees to improve brushy cover.

Hedge wood is renowned for its hardness and resistance to decay. These same characteristics that make it so desirable for fenceposts make it attractive to habitat managers. Hedge trees cut for covey headquarters can be expected to persist for a decade or more without breaking down. Osage orange leaves are alternate, simple, and shiny with a long pointed tip. Twigs typically bear numerous stout spines. 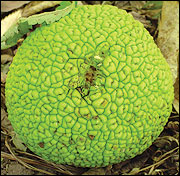 Osage orange fruit, or hedge apples, are up to 5 inches in diameter and resemble a green brain.

Inside the pithy fruit are dozens of elongated seeds. Quail and other birds sometimes consume these seeds, often after squirrels open the fruits.

A member of the mulberry family, Osage orange grows as a medium-sized tree up to 50 feet tall, and occurs along streams, at the edges of woods and in fencerows and thickets. Fleshy fruits up to 5 inches in diameter have a yellow-green color and a knobby surface that resembles a brain. Fruits form in late summer and begin to fall in October. Alternate, simple leaves taper to a long, pointed tip. The twigs are slender with milky sap and have stout, straight spines about 1/2 inch long that emerge from above the leaf attachment.

Osage orange has been planted since the early 1800s primarily for windbreaks and hedgerows. Bobwhites readily find refuge from weather and predators beneath the boughs of Osage orange where thick stands can form an impenetrable canopy. The suitability of Osage orange diminishes with age. Periodic thinning of mature stands is required to maintain the dense shrubby qualities of this species. As with eastern red cedar, mature Osage orange trees offer better cover to bobwhites when cut and laid over than when left standing. Significant numbers of Osage orange seeds have been found in quail crops. They were probably eaten after squirrels or other animals opened the fruits.