Nitrogen fertilizer, more than any other nutrient amendment, has increased commercial rice yields. Managing crop nitrogen in rice fields is challenging because flooded soils have several pathways for nitrogen loss. The greatest loss is due to bacteria converting nitrate to atmospheric nitrogen.

The goal of rice farmers should be to apply enough nitrogen fertilizer to avoid deficiency without applying too much. Overfertilization with nitrogen can lead to increased insect and disease occurrence, maturity delays, and lodging in rice crops. A 5-year test at the Missouri Rice Farm at Glennonville evaluated the response to nitrogen fertilizer on eight rice varieties. Results showed reduced yields when nitrogen fertilizer was applied at 150 percent of the recommended amount for each variety. Therefore, assessing nitrogen status in a quick and reliable fashion is critical in rice production.

Can I avoid midseason fertilization?

To combat nitrogen loss in rice production, growers distribute the risk of loss over a period of months by making both early and midseason applications of urea fertilizer. Rice plants need nitrogen early in the season to stimulate tillering and later as the plant begins the reproductive stages. For drill-seeded rice, the recommended method is to apply two-thirds of the total nitrogen each season immediately before permanent flood. The remaining one-third is broadcast by airplane in two midseason applications.

Midseason nitrogen applications are not always necessary. Factors such as rice variety, preflood nitrogen fertilizer rate, and weather conditions influence the availability of nitrogen in the soil to rice. The use of instruments such as chlorophyll meters shows potential for predicting when midseason nitrogen is needed.

Chlorophyll, a green pigment present in plants, captures the sunlight that is used in photosynthesis. Nitrogen is a key element in chlorophyll molecules. A lightweight, portable instrument developed by the Soil-Plant Analyses Development (SPAD) unit of Minolta Camera Company can be used to estimate chlorophyll levels in plants (Figure 1). 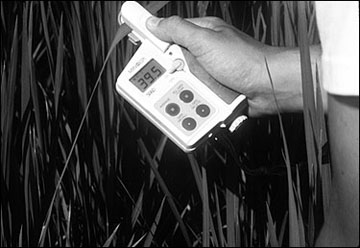 The meter estimates the amount of chlorophyll present by measuring the amount of light that is transmitted through a leaf. In essence, it determines "how green is this plant."

Chlorophyll meters can provide instantaneous, on-site information in a nondestructive manner. Fields can be monitored easily throughout the year. The chlorophyll meter is user friendly and can compute the average value of several samples.

How to use chlorophyll meter

Calibration of a chlorophyll meter is necessary each time the meter is used. Before inserting plant tissue, calibrate by pressing on the finger rest to close the head. After the meter beeps, a display is shown indicating the meter is ready for the first sample.

Sample rice leaves with the chlorophyll meter before scheduling aerial applications of midseason nitrogen. Normally, this is done shortly after the internode begins to elongate in the rice stems (Figure 2). Insert the newest fully expanded leaf from each plant while avoiding old or immature leaves. Keep track of how many readings have been made by monitoring the 'N=' displayed at the top of the screen on the chlorophyll meter.

Figure 2
Chlorophyll meter readings were made at the 1/2-inch internode growth stage.

It is best to collect at least 20 chlorophyll readings on small fields (less than 40 acres). On large fields take one reading for every two acres (e.g., an 80-acre field would require 40 samples). Since the chlorophyll meter will accept only 30 readings at a time, it may be necessary to split a large field in half. Be sure to collect readings from each bay of the field. Try to avoid areas in fields that are not representative of fieldwide conditions. After all the readings are made, press the button marked "average" to compute the average reading for the field.

Chlorophyll meter readings can be influenced by many factors other than nitrogen alone. Anything that can alter the color of plants (e.g., diseases, nutrient deficiencies, variety differences) can influence chlorophyll meter readings. Do not take readings on leaves with lesions or with bronzing around the margins. Lesions on leaves are usually caused by blast, sheath blight, or brown spot diseases. Plants with bronze leaf margins may be deficient in potassium.

In fields with an average chlorophyll meter reading of 40 or greater, midseason nitrogen applications are as likely to cause yield loss as yield increase. Research was conducted at the Missouri Rice Farm in 1997 and 1998 to develop calibration curves for Cypress and Kaybonnet varieties of rice (Figure 3). As leaf chlorophyll readings increased above 40 for Cypress and 41 for Kaybonnet, the chance of obtaining an economically favorable yield response to midseason application of nitrogen decreased. In Texas, researchers determined the critical chlorophyll value near the panicle differentiation growth stage for the Lemont variety was also 40.

Figure 3
Relationship between increase in rice yield following midseason nitrogen application and Minolta SPAD 502 chlorophyll readings for Cypress and Kaybonnet varieties. For meter readings above about 40, there is decreased likelihood of an economically favorable yield response to midseason nitrogen. (Missouri Rice Farm 1997 to 98)

Growers should understand that the chlorophyll meter does not indicate how much nitrogen to apply, but only when nitrogen may be needed. Chlorophyll meters, when used in combination with other available diagnostic tools, provide improved opportunity to manage nitrogen in rice.

Mention of trade names does not constitute endorsement by MU.