Leaf spot and melting-out symptoms can be confused with

Red leaf spot symptoms can be confused with 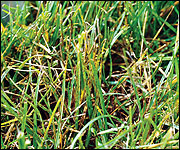 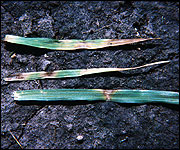 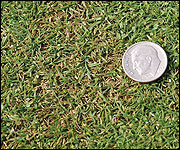 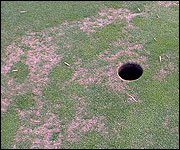 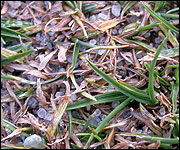 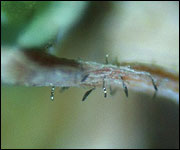 Drechslera leaf spot and melting-out
This disease was once considered the most important spring and fall disease of Kentucky bluegrass, but the widespread use of resistant bluegrass cultivars has lessened the impact of this disease. Still, some leaf spot can be found on most home lawns in the spring, and it can damage newly seeded lawns and certain susceptible cultivars of Kentucky bluegrass. This disease can sometimes be severe on tall fescue.

Drechslera leaf spot and melting-out develops in late March through mid to late May, reoccurring in the fall. Infected plants initially develop small elliptical purple leaf spots (Figure 1). The spots turn light gray or tan but remain bordered by a dark brown to purple margin (Figure 2). Leaf tissue surrounding the spots may turn yellow. The leaf spot phase of the disease usually does not damage the plant significantly. However, the fungus can also infect the crown, rhizomes and roots. As daytime temperatures increase, leaves on crown-infected plants turn light green or yellow, similar to nitrogen-deficient turf. Eventually these plants die and turn brown or straw colored. This is referred to as the melting-out phase of the disease. Severe melting-out results in irregular patches of dead turf. Damaged lawns are thinned and subject to weed invasion. Symptoms on tall fescue are similar to those on bluegrass.

Drechslera poae, as well as other fungi in this general group, sporulates to produce multicelled, darkly pigmented conidia (spores). As illustrated with a similar fungus, Bipolaris sorokiniana, sporulation occurs on the surface of infected grass tissue (Figure 3). The conidia are easily spread by wind, water and mowing, and the dark pigmentation makes them resistant to breakdown by ultraviolet light.

Red leaf spot is a high-temperature disease, occurring in June through August. The first noticeable symptoms on the putting surface are small brown to red patches, ranging in size from 1 to 8 inches or more (Figure 4). Under favorable conditions for disease development, the infection centers can coalesce to blight large areas of the putting surface (Figure 5). Unlike other leaf spot diseases on the larger-bladed turfgrasses, a true leaf spot symptom is difficult to see on creeping bentgrass. By the time the red patches are observed on the putting surface, individual leaf blades have usually shriveled (Figure 6). Conidia (spores) can often be observed with the aid of a hand lens (Figure 7 top). Morphologically the conidia are similar to those produced by other genera of fungi in this group (Figure 7 bottom).

Red leaf spot
Red leaf spot is favored by hot, dry conditions. Some bentgrass cultivars appear to be more susceptible than others.

Drechslera leaf spot and melting-out
The most effective means of controlling leaf spot and melting-out is to plant resistant cultivars. Most of the newer Kentucky bluegrass cultivars have a moderate to high level of reistance to D. poae. When seeding, use a blend of three or more of these cultivars. Avoid planting cheaper, "common" types of bluegrass such as 'Park', 'South Dakota', and 'Kenblue'.

Avoid excessive nitrogen fertilization in spring that favors lush growth, but do not "starve" the turfgrass of nitrogen during the spring. A well-balanced fertilization program will reduce the severity of the disease. There is some evidence that frequent watering to keep the thatch moist will help reduce sporulation by the fungus. The best time to irrigate is between midnight and early morning, because this will not extend the duration of leaf wetness. Use higher mowing heights (less than 2 to 2.5 inches) in late spring or during dry weather. Thatch reduction will also help reduce disease severity.
If leaf spot has occurred in previous years but has not caused significant injury, then fungicides are not warranted. Nevertheless, chemical protection may be required on highly susceptible cultivars. Refer to Table 5 for a list of fungicides labeled for control of leaf spot and melting-out. In this situation, the fungicide should be applied as soon as symptoms are observed. The disease is very difficult to control once the melting-out and crown rot phase has begun.