Take-all patch of creeping bentgrass is a soilborne disease caused by a darkly pigmented, ectotrophic root-infecting fungus. The disease is most common on new greens. It also occurs on reconstructed greens, especially when methyl bromide had been used in the renovation. 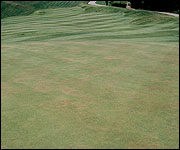 Figure 1
Symptoms of take-all patch on a creeping bentgrass green renovated from sod grown on a nursery green treated with methyl bromide. 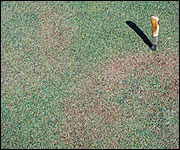 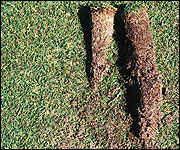 Figure 5
Healthy white roots of plants outside the patch.

Take-all patch symptoms typically appear in early to mid-summer as dinner-plate-sized or larger patches of wilted, off-color turf (Figure 1). The patches usually have a frogeye appearance, with greener grass in the middle of the patch (Figure 2). The root systems of infected plants are greatly reduced in relation to those of healthy plants (Figure 3). Because of poor root function, symptom expression often follows a period when greens were allowed to dry out. The patches are easy to spot in the early morning, because dew tends to dry on patches first.

The roots of plants infected with Gaeumannomyces graminis var. avenae are deteriorated, with a black discoloration of the vascular cylinder (Figure 4). The roots have a shrunken appearance, in contrast to healthy white roots taken from outside the patch (Figure 5). Darkly pigmented ectotrophic runner hyphae of G. graminis var. avenae can be observed on the surface of infected roots (Figure 6). The simple hyphopodium from which the fungus infects host tissue is one morphological characteristic used to help identify G. graminis var. avenae (Figure 6 inset).

In the interest of getting a quick answer to the superintendent, diagnosticians usually base their diagnosis on symptom expression in the field and microscopic observation of darkly pigmented runner hyphae and simple hyphopodia associated with the roots. The diagnosis made in this manner is presumptive because there are many nonpathogenic, darkly pigmented ectotrophic fungi associated with turfgrass roots. Confirmation using isolation and molecular techniques may be available at some universities with active research projects on the ectotrophic root-infecting fungi.

Greens most at risk for take-all patch are new greens (two to five years old) carved out of woodlands or other areas where grass has not grown for years. Newly constructed greens or renovated greens where methyl bromide was used are also at risk. This risk is thought to be due to the lack of diversity of soil microorganisms suppressive to G. graminis var. avenae on such sites.

G. graminis var. avenae is a poor competitor when confronted with a diversity of other soil microorganisms. Over time, the natural buildup of soil microorganisms suppressive to G. graminis var. avenae results in a reduction of take-all disease incidence and severity. This resulting take-all decline is a natural biological control phenomenon. Take-all decline has been extensively studied in the wheat/take-all system. The soils that suppress take-all have been a rich source of biological control organisms such as the fluorescent pseudomonad bacteria that are antagonistic to the take-all fungus. In areas where no grass has grown for years or in cases where the root zone was treated with methyl bromide, the populations of organisms suppressive to G. graminis var. avenae require time to build up.

Although symptoms typically don't occur until heat and moisture stress periods, infection occurs under cool, wet conditions in the spring and fall. Disease development is favored by high soil pH at the rhizosphere. Nitrate forms of nitrogen, which result in high pH at the rhizosphere, tend to increase the severity of take-all. Liming can also increase disease severity.

Take-all patch is more severe under high soil pH. Use of nitrate fertilizer sources, which results in high pH at the rhizosphere, should be avoided when take-all patch is a problem. Ammonium forms of nitrogen such as ammonium sulfate should be used as the primary nitrogen source for one to two years following disease outbreak.

A preventive fungicide program is recommended for new greens or greens with a history of the disease. Refer to Table 5 for a list of fungicides labeled for control of take-all. Make one fungicide application in late fall, followed by two applications in the spring, beginning in early to mid-April. Fungicide application after symptoms develop will have little effect on the disease, because symptom expression is a moisture stress symptom resulting from the inability of infected roots to meet the water needs of the turfgrass plant. Frequent syringing in the summer will be necessary to reduce moisture stress symptoms.