Rust occurs to some extent on all turfgrasses, but the rust fungi are generally host specific. Rust is most severe on susceptible cultivars of Kentucky bluegrass, tall fescue, perennial ryegrass and zoysiagrass. Rust symptoms usually appear in late August to early September and continue through the fall months. Rust can also develop at other times of year, depending on environmental conditions, turfgrass species and rust species. Disease severity can vary dramatically from one year to another. 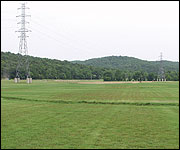 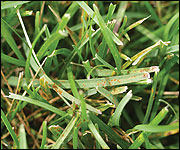 Figure 4
Urediniospores of a Puccinia sp. 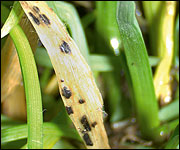 Figure 6
A close-up of teliospores of a rust fungus. 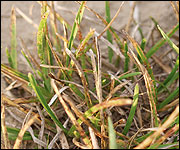 From a distance, rust-infected turf appears dull yellow or dark brown to purple (Figure 1). The rust fungi that infect turfgrasses produce two types of spores that are easily observable in grass leaf blades. The first to develop are urediniospores. The fruiting bodies containing urediniospores rupture the leaf epidermis, resulting in rust pustules that are visible to the naked eye (Figure 2). Rust pustules range in color from cinnamon brown to orange or yellow, depending on the species of rust fungus (Figure 3). The powdery spore mass rubs off easily on fingers, shoes or clothing. The color, size and shape of urediniospores vary with Puccinia sp. (Figure 4). Urediniospores serve as a source of inoculum to reinfect healthy turfgrass in the local area or, when wind-borne, to initiate infection in other areas.

The disease may be more difficult to diagnose later when pustules turn black (Figure 5). The blackened fruiting bodies contain a second type of spore — teliospores (Figure 6). Teliospores germinate to produce basidiospores that are dispersed by wind to infect alternate nongrass hosts. Although sexual reproduction and recombination occurs on the alternate host, which varies with rust species, this stage of the rust disease cycle is considered of minor importance in turfgrass. Continuous heavy infection causes grass blades to turn yellow, wither and die, resulting in stand thinning (Figure 7). Severely rusted stands are more prone to winterkill.

The rust fungi (Puccinia spp.) overwinter as urediniospores in infected plants or are reintroduced each summer by wind-blown spores. Infection of leaf blades is favored by moderate temperatures (68 to 85 degrees F) and extended wet periods. The disease tends to be more severe in partially shaded areas, such as under trees or along fence rows. Once infection occurs, slightly higher temperatures favor symptom development. Turfgrasses under stress (nutrient deficiency, drought, shading, close mowing heights and high temperatures) are more likely to be seriously damaged by the disease.

Turfgrasses provided with optimal levels of fertilizer and water are less likely to be severely damaged by rust. Avoid night watering which increases the length of time the leaf blades remain wet. Regular mowing that removes infected leaf tips from the plant will help reduce inoculum levels. The best strategy is to mow frequently at a height not less than what is recommended for the turfgrass. Avoid close mowing or scalping of the turf.

For long-term disease management, choose grass cultivars with a high level of resistance to rust. Check the National Turfgrass Evaluation website at ntep.org for the most up-to-date information on relative resistance of selected turfgrass cultivars to rust.

Refer to Table 5 for a list of fungicides labeled for the control of rust. In general these products work best when applied early in the development of the disease. The decision to use fungicides is often difficult because applications need to be made relatively early in rust development. Because the rust epidemic is dependent on weather, it is hard to determine if early fungicide sprays are warranted. In most years rust does not reach damaging levels before the turfgrass enters winter dormancy, so fungicides are not routinely used for rust control in home or commercial landscapes.