Fairy ring is caused by more than 60 basidiomycete fungi, including those producing the familiar puffballs and toadstools. The rings result from the activities of these fungi growing radially through the thatch or soil, rather than from a direct parasitic relationship with the turfgrass. Fairy ring occurs wherever grass is grown. 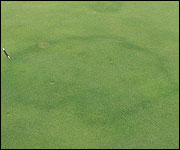 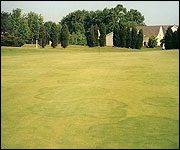 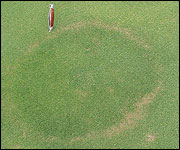 Figure 3
Firing of the turfgrass at the margin of the ring (Type 1). 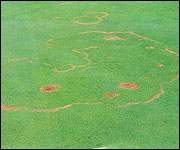 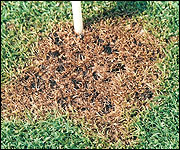 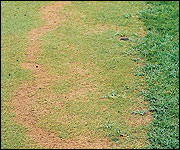 Figure 5
Disruption in continuity of the ring where the root zone changes from sand to soil. E. Ervin photo. 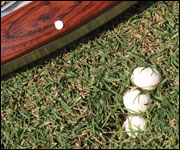 Figure 6
Top: Fruiting bodies (puffballs) emerging at the margin of fairy rings on a putting green. 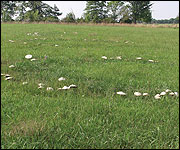 Figure 7
Large, showy mushrooms of a fairy ring in a pasture.

Fairy rings are usually first noticed as irregular rings or arcs of darker green grass on the turf surface (Figure 1). The darker color is caused by the release of nitrogen as the fairy ring fungus breaks down organic matter. The margins of the rings are often irregular or wavy. On putting surfaces especially, the entire area defined by the ring may be darker green than the surrounding uncolonized area (Figure 2).

The rings can remain green or progress to the point where dead grass develops at the margin (Figure 3). Death of grass at the margin has been attributed to moisture stress due to hydrophobic soil conditions that develop as the fairy ring fungus grows. The death has also been linked to excess nitrogen release or the formation of hydrogen cyanide or other toxic metabolites. With some fairy rings, death of the grass also occurs in spots where the fruiting bodies have emerged and then collapsed (Figure 4 top). Fairy ring with resulting loss of turf is one of the most destructive diseases occurring on putting surfaces.

Where two or more rings meet, the margins of the individual rings are incomplete (Figure 4 top). Rings are also disrupted by changes in soil type (Figure 5) or by impediments such as cart paths or sidewalks. When rings form on a hillside, the bottoms of the rings are not closed.

Fruiting bodies associated with the causal fungus may or may not emerge. Fruiting bodies found on putting surfaces are often puffballs that form at the outer margins of the rings (Figure 6). Other fairy ring fungi, especially those in pastures or other areas of higher cut turf, produce larger and more spectacular mushrooms (Figure 7).

Fairy rings are elusive, often visible one year and not the next. Under some environments, fairy rings are visible every year. The factors that favor symptom expression and the growth and development of the fairy ring fungi are not well understood. Until recently, identification of the fungal species causing fairy ring in a given environment has keyed on fruiting body morphology and spore color, size and shape. Recent advances in genetic techniques have allowed for identification of some species without the presence of fruiting bodies, but this is not a widely available diagnostic tool.

Although the biology of the fairy ring fungi is not well understood, certain generalizations can be made. Fairy ring symptoms are usually more noticeable in nitrogen-deficient turf, simply because more nitrogen is available to the turfgrass plant in areas where the fairy ring fungus is decomposing organic matter.

Fairy ring is more commonly observed under heavy thatch. Fairy ring has been observed on all soil types, but is more common on sand-based putting surfaces. Fairy ring is especially abundant following new construction or renovation, presumably because of low population levels or lower diversity of competitive or antagonistic microorganisms. Nevertheless, fairy ring can also occur on older putting surfaces, especially under heavy thatch or where severe layering is an issue. Greens topdressed with fine sand are also more prone to fairy ring.

Moisture is important to fairy ring development and symptom expression. Type 2 rings are more likely to progress to damaging Type 1 rings when moisture is limiting. Ring margins typically fire on windy days with low relative humidity. Once browning has occurred, the soil is difficult to rehydrate. Fruiting bodies are more common under wet, humid conditions.

Management of fairy ring on putting surfaces has been achieved with varying levels of success by application of one or more of the fungicides labeled for fairy ring control or suppression. Fungicides labeled against fairy ring include Heritage, Insignia and Prostar. Also included in this list are Bayleton and Endorse under a FIFRA Section 2(ee) registration. The level of fairy ring control or suppression with fungicide has varied widely from one location to the next. There are a number of factors that most likely contribute to inconsistent results. The application method is important. To increase the chances for success, the area to be treated should be spiked or quadratined before fungicide application. The use of a wetting agent just before fungicide application or as a tank mix with the fungicide may increase efficacy. Follow individual label recommendations.

Another factor that no doubt contributes to inconsistent results is that in most cases the targeted fairy ring species is unknown, so there is no effective way to determine how deep the fungus is growing. Also, fungicides labeled for fairy ring management differ in the fairy ring species listed on the labels. Until the biology of these fungi is better understood, finding the right product and application method for your facility may have to be achieved by trial and error.

On greens with a history of fairy ring that expresses as Type 1, fungicide application in combination with cultural practices can be a useful tool. Preventing firing of the fairy rings and subsequent loss of turf can often be achieved by diligent monitoring of moisture status in these areas, combined with wetting agent application, spiking and hand watering as needed to prevent drying. Removal of excess thatch is also necessary.

Symptom expression can often be masked with application of judicious amounts of either nitrogen or iron, or both. The level of success with this approach will depend on the nutrient status of the turf.

Fairy rings on home lawns seldom cause extensive damage; however, homeowners often consider the mushrooms to be unsightly or express concerns about ingestion by children or pets. Removal of mushrooms by hand or by mowing is recommended where pets or children may be exposed, because many of the fairy ring fungi as well as other mushrooms in lawns are toxic. Masking symptoms with small amounts of nitrogen or iron may be effective in some cases.