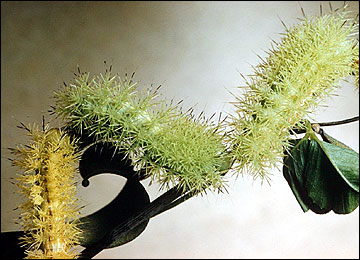 The entire body of the io moth caterpillar is covered with clusters of pale green, black-tipped, branched spines that are very irritating when they come in contact with the skin. These whorls of spines arise from small tubercles. Full-grown larvae are about 2 to 3 inches long. The body is pale green except for white and reddish brown stripes running the length of the abdomen and associated with the spiracles. The young caterpillars are usually gregarious, but as they grow they become solitary. Common host plants include maple, sassafras, oak, hickory, elm, apple, beech, cherry, black locust, mulberry, dogwood, sycamore, and even corn and other grasses.