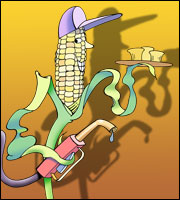 The use of vegetable oil in compression-ignition engines is not new. Rudolph Diesel, who is credited with invention of the engine, first used peanut oil as fuel. However, the petroleum-based fuel we now call "diesel fuel" soon became the fuel of choice because of economic advantage. Until political unrest made availability questionable and air pollution became a concern, little consideration was given to alternative fuels.

In 1974, when unrest in the oil-rich Middle East threatened crude oil supplies, it became apparent that other countries dependent on imported oil could quickly be deprived of necessary fuel (at present, the U.S. has about 4.4 percent of the proven world petroleum reserves but consumes 25 percent of the world oil supply). As a result, research on alternate fuels was funded and old research information was retrieved.

Considerable research was then conducted on vegetable oils (such as soybean, safflower, rapeseed, sunflower and peanut oils) to fuel compression-ignition engines. An International Conference on Plant and Vegetable Oils as Fuels was sponsored by the American Society of Agricultural Engineers in August 1982. Yet research declined in the late 1980s as the price of petroleum-based fuels dropped.

The Persian Gulf war in 1991 reminded us that the U.S. cannot rely solely on foreign oil for fuel to produce, process and distribute food and feed products. The need to be self-sufficient and to have a reliable energy source now seems important enough to look beyond simple economic comparison.

The chemical structure of vegetable oil, an organic acid ester, is a glycerine molecule with up to three fatty acids linked to it with ester linkages. The comprehensive term triglyceride is used to describe this arrangement. The process of squeezing the seeds to remove oil and leave the meal, which usually has value as animal feed, is called expelling. Degumming is a process for removing gummy substances and impurities from the raw, or neat, oil. Transesterification, or esterification, is the chemical process of converting an organic acid ester to another ester of the same acid. As used in this guide, esterification removes the glycerine stem from the molecule and the resulting ester has a much smaller molecule, which improves characteristics such as viscosity that are desirable for use as an engine fuel.

Several states have conducted research on the feasibility of biodiesel fuel. Scientists in North Dakota have investigated expelling, degumming and esterifying oil from sunflower seed. Idaho scientists have investigated rapeseed oil, developing a relatively simple procedure for esterification. Rapeseed oil, which is used for industrial processes, contains a level of erucic acid that is detrimental to animal feed, so low erucic acid varieties, called canola, have been developed. In general, research information on rapeseed is applicable to canola.

Scientists in Illinois and Missouri have investigated the use of esterified soybean oil, called soy ester, and soy ester/diesel blends. In general, research findings indicate that it is feasible to use vegetable oil esters from a variety of sources as extender or replacement fuels for compression-ignition, internal-combustion engines. Table 1 compares characteristics of diesel fuel and some vegetable oils and their esters.

At present, a pickup truck with a direct-injection, compression-ignition engine can be operated on esterified soybean oil. The truck is being used over-the-road and for typical farm activities to evaluate the effect of soy ester on engine wear when subjected to varying load/temperature conditions. Fuel is heated when temperature falls below the oil's cloud point (about 34 degrees Fahrenheit), the point when filter clogging can occur. Periodic samples of engine lubricating oil are analyzed for presence of metals that would indicate unusual engine wear. Exhaust emission levels are periodically analyzed for air pollutants. Exhaust is visually cleaner than diesel fuel exhaust, and the odor from vegetable oil is considerably less offensive than that of diesel fuel. Table 2 illustrates the non-visible emissions data by various diesel/soy oil blends. A 50/50 blend appears to have good characteristics.

The esterified soybean oil used is presently being purchased from a supplier. The oil is already esterified. It is hoped that a portable esterification system, which could be used by individual farmers or a cooperative group of farmers, can be constructed for demonstration use. Additional work is needed to learn what processing steps are required to be sure no harm will be done to the engine or to the environment. This work is being funded in part by a grant from the Missouri Soybean Merchandising Council.

Diesel fuel is sold on a per gallon basis, while soy oil sells by the pound. For comparison, some equivalent basis, such as volume or Btu content, is needed.

Potential oil yield for soybeans is about 18 percent. That is, from a bushel of soybeans weighing 60 pounds, 10.8 pounds of oil can be removed. The remaining meal may be sold for about $185 per ton (or 9.25 cents per pound). Oil yield from canola and sunflower ranges from 40 to 45 percent.

The first commercial use of vegetable oil in the U.S. will likely be as a blend with diesel fuel. Several test vehicles are operating at present on blended fuel at Lambert Field airport in St. Louis.

Austria, Germany and Switzerland have removed all sales and road tax from biodiesel. If the total tax associated with the sale of diesel fuel in Missouri were about 30 cents per gallon and soy ester could be produced for $3 or less per gallon (if it were not taxed), then it would not cost the consumer any additional money to use a 10/90 soy ester/diesel fuel blend.

Emphasis on control of engine emissions is increasing. Using diesel fuel will require provisions for "cleaning" the exhaust. This eventually may make biofuel the fuel of choice, either alone or as a biofuel/diesel blend, because it naturally causes less air pollution.