Editor's note
The following abstract describes a publication that is intended for print distribution or as a downloadable PDF. Please see links to the PDF file and ordering information on this page.

Chinese chestnut is an emerging new tree crop for Missouri and the Midwest. The Chinese chestnut tree is a spreading, medium-sized tree with glossy dark leaves bearing large crops of nutritious nuts. Nuts are borne inside spiny burs that split open when nuts are ripe. Each bur contains one to three shiny, dark brown nuts. Nuts are baked or boiled to help remove the leathery shell and papery seed coat to reveal a creamy colored meat. Chestnuts are a healthy, low-fat food ingredient that can be incorporated into a wide range of dishes — from soups, to poultry stuffing, to pancakes, muffins and pastries (using chestnut flour). Historically, demand for chestnuts in the United States has been highest in ethnic markets (Italian and Asian) but as Americans search for novel and healthy food products, chestnut should find wider acceptance.

This guide explains the basics of establishing and managing a Chinese chestnut orchard. Topics include site and water requirements, updated cultivar selections, methods for establishing orchards, updated fertilization information, harvesting and storage information. New sections include highlights from the Center's nationwide chestnut market analysis, a listing of value-added products that can be made with chestnuts and a list of retail nurseries offering recommended cultivars. 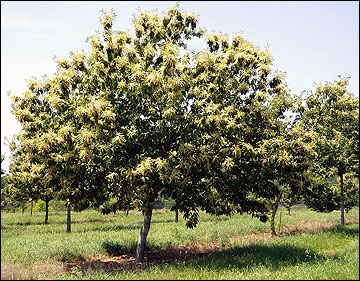 Chinese chestnut is a medium-sized tree with spreading habit and has attractive white catkins in late May and early June. 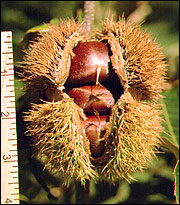 A dehiscing burr of the "Qing" cultivar. The nut in the middle position is flattened on two sides.

Chinese chestnut seedlings are widely available in nurseries across the Midwest. Although these trees provide adequate nut production for home use, seedlings often produce small nuts of mediocre quality. Establishing an orchard of chestnuts with seedling trees will make nut harvest overly complicated. Each tree in the orchard will ripen at a different time making quick and efficient harvest difficult. Grafted trees of proven cultivars provide more uniform ripening, higher nut quality, larger nut size, and more consistent yields. The evaluation of chestnut cultivars for the Midwest is in its early stages. University trials in Missouri have been established and are providing preliminary data. Table 1 lists a few Chinese chestnut cultivars that have shown excellent potential for nut production in Missouri. 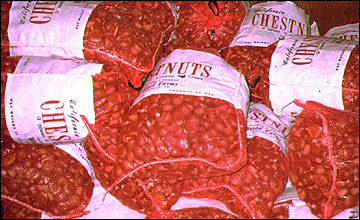 Chestnuts ready for roasting on an open fire.