Caterpillars in Your Yard and Garden - Page 24 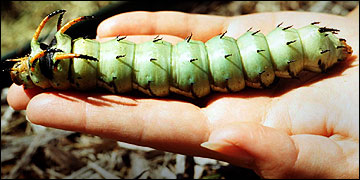 This fierce-looking caterpillar is the immature stage of the regal moth. Full-grown larvae are dull green and can reach lengths of 4 to 5 inches. On the thoracic segments behind the head are long, stout, orange and black spines or "horns." The longest of these horns are found on the second and third thoracic segments. Six smaller black spines are found on each abdominal segment. Host plants include hickory, walnut, butternut, sumac, persimmon, sweetgum, ash and sycamore.