Note
The information in this guide is for educational purposes only and is not a substitute for competent legal advice.

Missouri has two fence laws: the general fence law (updated Aug. 28, 2001) and the local option fence law. In addition, Missouri law addresses special situations of property bordering a road, a railroad, or a body of water. Landowners need to be aware of these special situations and of which fence law is in place in counties where they own land. This guide answers common questions about these laws.

Which Missouri counties have opted out of the general fence law?

The following 19 counties currently have opted out of the general fence law and are subject to the local option fence law:

Gentry and Worth counties voted to adopt the local option since the general law was updated in 2001, and Cedar County adopted the option law in 2015. The other 16 counties voted before then, with Macon being the last in 1986. All other Missouri counties are subject to the general fence law. (See Figure 1.) 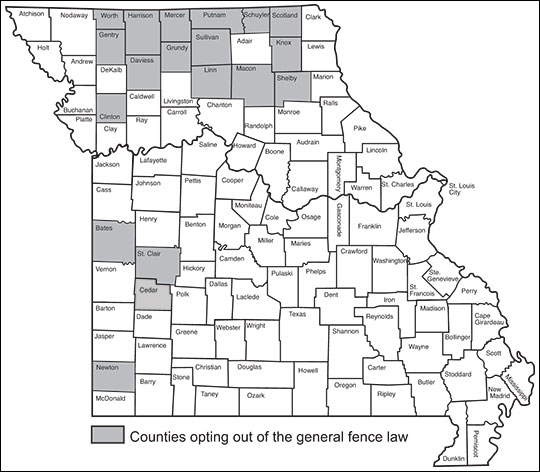 Figure 1. Many northern Missouri counties have opted out of the general fence law in favor of the more livestock-owner-friendly local option law.

Why have so many northern Missouri counties opted out?

The local option fence law, which is patterned after laws in Iowa and other Midwestern states, increases livestock owners' rights. The counties that have opted out of the general law are generally strong livestock counties.

Who is legally responsible for building and maintaining a boundary (between two or more landowners) fence?

How is "livestock owner" defined in the updated general fence law?

In general law counties, a person who has livestock in a field at any time during the year is considered a livestock owner and is required to have a fence. One head would qualify; cattle grazing corn stalks for 25 days qualify. An owner could possibly put a hot wire or fence 10 feet or more off the property line, but this could lead to an adverse possession issue (see Boundary lines and adverse possession section).

What if my neighbor puts livestock against the boundary fence after I have built it?

This issue relates only to general fence law counties as livestock ownership doesn't matter in local option counties. The law provides that the livestock owner who pays for the fence can have the construction costs — materials, labor and possibly dozing — recorded against both deeds by the associate circuit judge. If the other landowner later places livestock against the fence, he or she is to reimburse the person who built the fence for half of the recorded costs.

Unfortunately, this portion of the law has not worked well for three reasons. First, no specific documents are in place to guide judges in these cases. Second, the judge must determine if the costs given by the landowner are reasonable, and most judges have no agricultural background or knowledge. Finally, this state has a tradition, especially in counties south of the Missouri River, of allowing only lawyers to enter an associate circuit judge's office. Although no law limits entry, this custom is followed frequently and prevents a landowner from presenting fence cost documentation or discussing the situation directly with the judge without the benefit or the cost of an attorney.

What portion of the fence am I required to maintain?

Aren't I responsible for only the part of the fence where the wire is on my side of the posts?

Nothing in the law relates to this or other common misconceptions about fence responsibility. To protect yourself, follow only what the law says unless you have a different agreement that is in writing and has been recorded.*

What is a legal fence in Missouri?

If my neighbor needs a more substantial fence, do I have to pay for it?

If a neighboring land- or livestock owner needs a fence above the legal definition, such as woven wire or a 15-foot deer fence, you are required to pay only what your portion of a legal fence would cost. Anything above that cost is your neighbor's responsibility.

If my neighbor wants to doze out the old fence and build a new one, but I don't, do I have to allow it?

This question brings up several potentially separate issues. First, the tradition in Missouri is that 10 feet on each side of the boundary fence would be cleared before putting in a new fence, but this is not required in the statutes. It is, however, a good idea from a fence (making certain the new fence doesn't get damaged from falling trees or limbs) and liability standpoint (see Liability concerns section). Second, does the current fence meet the legal definition and maintain livestock? If you cannot agree on this, then the associate circuit judge can appoint three disinterested parties to decide. Finally, the state law does not address the potential issue of an individual not having the funds to build a new fence at the time it is needed.

Can I just move my fence if a survey of my property shows that the current fence is not on the actual boundary line?

In Missouri as in other states, a boundary fence that has been in place for 10 or more consecutive years can, in effect, become the boundary by the legal doctrine of adverse possession (RSMO chapters 516 and 527). Adverse possession means that the fence, for all practical purposes, becomes the property line, and so you cannot just remove or move the fence.

A survey does not take precedence over adverse possession. If a fence has been in place for more than 10 years, you can't just move it. A fence that has been in place less than 10 years, however, can be moved based on a property survey. The fence has to be in place and meet the minimum definition of a legal fence for this to qualify for adverse possession. So, rotted posts in the ground or a fence lying on the ground likely will not meet that definition.

What is required for adverse possessio

In addition to the 10-year requirement, for adverse possession to take effect, the neighbor's occupation of the land must be

Years ago, when neighboring landowners couldn't agree on where to put a fence, they each located a fence on the adjoining side of their properties with a 10-foot lane in between. The space between such fences is called a "devil's lane." Although creating a devil's lane may avoid disputes initially, it can lead to adverse possession if one of the landowners claims the lane years later.

Can I dispute adverse possession in court and prove that the survey is correct?

For adverse possession to be complete, such that the property line is legally determined, it has to be proved in court. The judge will hear evidence from both sides. What evidence is allowed is decided by the judge and might include the survey, pictures and witnesses as to how long the fence has been there. This process generally puts a new landowner in a tough legal position unless all or some of the evidence supports his or her claim.

Can my neighbor and I agree to put a fence in place on the current boundary line without risking adverse possession later?

Yes, you and your neighbor can place the fence in an agreed-upon location and, to avoid adverse possession, state that it is there "for convenience purposes only" (have an attorney draft the specific wording) on a quitclaim deed, which must be signed by you both and recorded in the county recorder's office. Such a deed can also be recorded concerning a fence that is already in place if you and your neighbor agree.

Why won't a judge just use a survey I have had done to decide where the boundary line is?

Surveys may be very accurate, but they are not infallible. At times, two surveyors may put a boundary line at different locations. Several locations in Missouri do not have the old quarter-mile marker pins (iron stakes in the ground), so surveyors must go from other points. Surveyors' skills depend on whether they are certified and how much experience they have. Due to these and other reasons, some judges will not allow a survey as admissible evidence in court. Most judges will use a survey as just one piece of evidence among others, such as photos, witnesses, land use, etc.

If my neighbor's livestock get onto my land, does my neighbor have to pay for any damage they cause?

What can happen to me if I don't maintain my part of the fence?

You open yourself up to two liability concerns if you stop maintaining your part of the fence. First, you would not be entitled to compensation for damage done by livestock getting onto your property. Furthermore, you may not be entitled to certain government payments, such as Conservation Reserve Program (CRP) assistance. Secondly, you could be liable if livestock get out onto a road or another neighbor's land and do damage. However, section 272.030 limits liability to only cases of livestock-owner negligence. An owner would likely be found negligent if the fence was not maintained, watergaps were not kept up, or the animals did not have adequate feed or water available, among other possible reasons.

Can I keep the trees and other plants that are on my side of the fence?

Traditionally, 10 feet on each side of the fence is kept clear of brush and trees to minimize potential damage to the fence and so the fence can be maintained easily, but it is not a legal requirement. However, you can be held liable and have to pay for repairs if your trees or brush obstruct or fall onto the fence.

What if my neighbor and I agree on a different maintenance plan than what's in the law?

Who is responsible for water gaps on the boundary line?

You may have heard that water gaps are the responsibility of the owner that is downstream or on whose side the wire is on, but these arguments are not legally or otherwise binding. The law does not specifically address water gaps, so the landowner whose portion of the fence the water gap is on would be responsible. Any agreement otherwise needs to be recorded in the county recorder's office.* An inequity such as when a water gap is entirely on one landowner's portion is a good example of a case when neighbors working out an agreement other than what the law requires is a good idea.

What about county-specific rules on fences or animals?

There are no county-specific fence laws. Although you may hear such rules as stallions can't be out of a barn and running in a pasture, or that if livestock come onto your property you can sell or butcher them, nothing in the law states either of these as legal.

Can I distrain or hold animals that come onto my property?

The fence statute and two others (RSMO chapters 270 and 271) address what landowners can do with animals that come onto their property. A landowner may distrain or hold the animals only in nonboundary situations, where property lines are along a road or creek. Contact the owner as soon as possible, and keep in mind that distraining an animal requires you to treat it as your own, that is, that you feed and care for it. Contact an agriculture business specialist for the specifics of distraining animals.

Where can I find more information on the Missouri fence law?

*The form to be filed must meet certain recording requirements. For a sample, contact either Joe Koenen, MU Extension agricultural business specialist, at [email protected], or your lawyer.