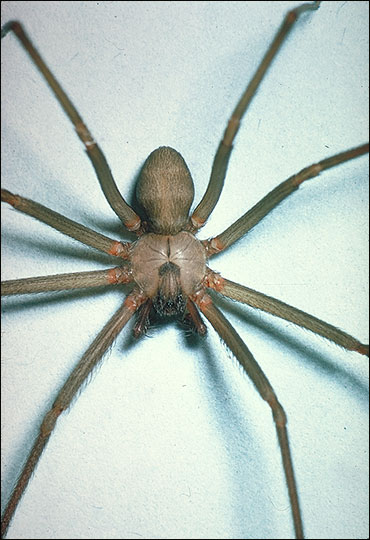 The brown recluse, Loxosceles reclusa, is one of two species of poisonous spiders in Missouri. 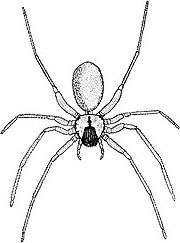 The name "brown recluse" describes the color and habits of this spider. It is usually found in structures that contain dry, cluttered space that is undisturbed and has a supply of insects or other small organisms to serve as suitable prey. One study found this spider in about 70 percent of homes that were sampled in Missouri.

The color of the brown recluse varies from light tan to brown. They have six eyes and just behind their eyes is a darker, broad, fiddle-shaped area that extends to the back of the cephalothorax (head). The long neck of the fiddle points to the rear. A mature spider is about 1/2 inch long by 3/16 inch wide. The abdomen is generally not much larger than the cephalothorax. With its legs in a normal standing position, the spider typically covers an area about the size of a quarter.

Most encounters with brown recluse spiders occur at night when the spiders are active and foraging for food. During the day they are resting in secluded places. Other encounters occur when seldom-used clothes, containing a spider that has been using the garment as a hiding place, are worn. Brown recluse spiders cannot bite humans without some form of counterpressure. This pressure usually occurs when they are trapped against the skin.

Both male and female brown recluse spiders are venomous. Human reactions to a brown recluse bite vary considerably and depend on the amount of venom injected by the spider and the victim's sensitivity to the venom. A painful reaction can occur almost immediately, but often the victim won't realize they have been bitten for an hour or more. Victims usually describe a stinging sensation followed by intense pain. A small white blister usually develops at the site of the bite. The affected area swells and becomes hard to the touch. This tissue dies and eventually sloughs away, leaving a sunken, ulcerated sore of various sizes. The typical reaction has been described by physicians as unremarkable or mild and covers an area less than the size of a dime. In a small percentage of cases (less than 5 percent) the sore covers a larger area.

Brown recluse common in Missouri
The sight of a brown recluse spider can evoke fear and conjure up images of ulcerated wounds brought on by their venomous bites, but their presence is less likely in clutter-free homes.